This topic provides information about the Pod and Container Management (PCM) changes and requirements to support the management of VMware NSX platform using BMC Network Automation as part of a BMC Cloud Lifecycle Management implementation.

Overview of the NSX environment

NSX is a software-defined networking (SDN) platform for VMware in which the NSX Manager acts as the SDN controller. NSX provides a complete set of logical networking elements and services including logical switching, routing, firewalling, load balancing, VPN, Quality of service (QoS), and monitoring.

When you add an NSX distributed firewall, select Admin for Security Context.

You can push configuration changes to all the NSX device types through injection templates. Injection templates are templates whose contents are an XML snippet of the same form that is used in device commands within the device adapters. When you push the template through a Deploy to Active operation, the snippet is inserted in place of the injectTemplate tag within the device adapter, and interpreted at run time. This allows you to embed REST API style interactions within the XML snippet, to make changes to a device that does not support CLI-based commands. For more information, see Using injection templates to change device configuration.

In addition to using the injection templates for pushing the changes, BMC Network Automation includes the following custom actions to perform common NSX configuration tasks. For a few parameters that you need to provide while executing these custom actions, you need to access vCenter. For details, see gathering inputs for pods.

Before you start creating an NSX POD, ensure that the following prerequisites are met:

This section describes the container structure, requirements, and provisioning sequence. It also describes how ACL updates occur in containers.

NSX does not have explicit concept of tenancy within its environment. However, it supports mechanisms for layer 2 segregation (VXLANs associated with logical switches), layer 3 segregation (north-south routing in NSX service gateway (a type of NSX Edge), and east-west routing in NSX distributed routers (another type of NSX Edge)). Logical switches are connected through interfaces on those NSX Edges that have been designated to carry their traffic.

A logical switch in the NSX model maps to a NIC network segment in the BMC Network Automation PCM model. A network container in PCM therefore encapsulates the set of logical switches associated with its NIC network segments, and the NSX Edge instances they connect to. Logical switch names used in the Deploy Logical Switch custom action of the configureActionInfoBlueprint container blueprint schema of type customActionInfoBlueprint must follow the naming convention of ${containerName}-nicSegmentName.

When you create a logical switch in NSX, it automatically creates a port group in the dvSwitch associated with it. NSX names the port group as vxw-dvs-dvsID-virtualwire-logicalSwitchID-sid-vxlanID-logicalSwitchName. These IDs are not known to the BMC Network Automation PCM model, and must be discovered at run time. You can use the NSX Discover Port Group custom action to discover these IDs. You can use the results of the custom action to populate the port type nameWithinSwitch attribute in the PCM model. The hypervisor switch owning the port type will correspond to the dvSwitch. However, BMC Network Automation will not attempt to communicate with the dvSwitch directly when configuring the container. Instead, it will communicate with the NSX Manager to create the logical switches, and the NSX Manager automatically creates the port groups on the dvSwitch.

NSX manages the acquisition of VXLAN IDs for its logical switches internally through its own VXLAN pool. BMC Network Automation cannot use a pool in a pod to manage them. Therefore, for the NIC segments within an NSX container, its VLAN is represented as null, and its values are not managed by BMC Network Automation.

The NSX Service Gateway can perform perimeter (north-south) firewalling and load balancing in addition to routing. However, BMC Network Automation and BMC Cloud Lifecycle Management do not support these services yet. You can use other supported non-NSX firewalls to secure the perimeter of your container.

BMC Network Automation and BMC Cloud Lifecycle Management support east-west firewalling through the NSX global firewall rules. However, those rules in NSX can be modeled only when they are applied to a particular logical switch. If they are applied to other entities, such as hosts, clusters, datacenters, VM attributes, they cannot be modeled. Therefore, you must apply the NSX global rules always to logical switches. Further, note that a given section within the global rules corresponds to a particular NSX distributed firewall device in BMC Network Automation, where the section name corresponds to the security context name of that device. Therefore, a given distributed firewall in an NSX container should only manage a single interface (with an inbound ACL), which services the NIC segment associated with the logical switch which its global rules section are applied to.

Before importing a container blueprint, ensure that the following requirements are met:

The following sequence of actions are executed when an NSX container is provisioned:

Topology of a sample NSX container with distributed firewall 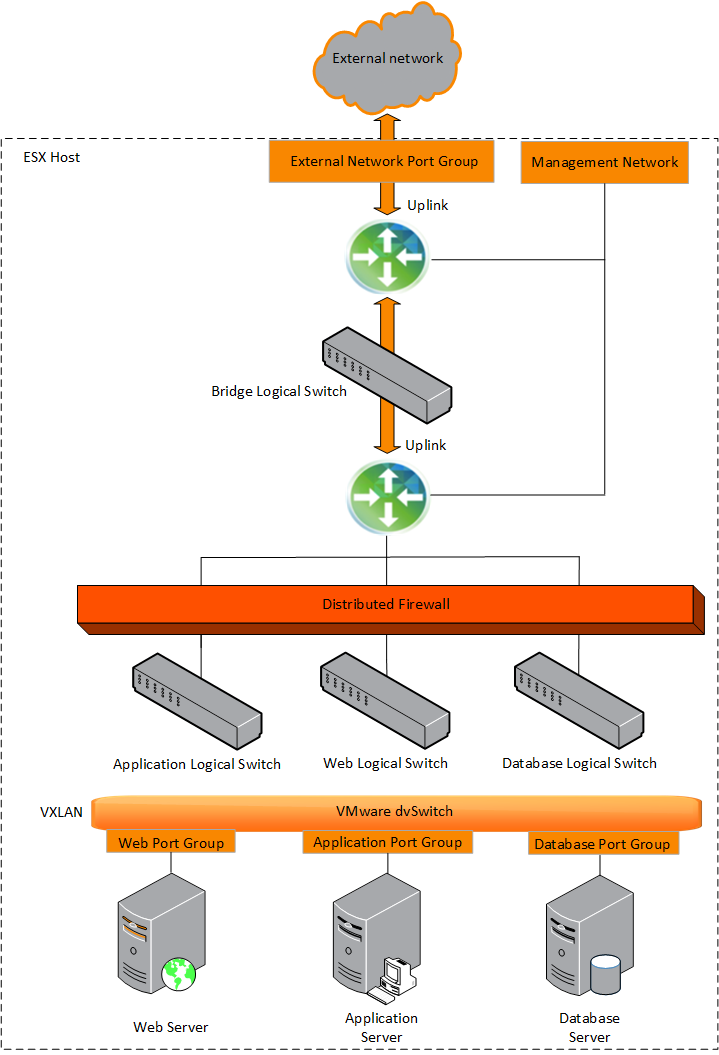 When an ACL update occurs on a distributed firewall in an NSX container, and BMC Network Automation pushes firewall rules (through an injection template created at run time) to the corresponding section within the NSX global rules, BMC Network Automation attempts to reuse the existing NSX global IP Set instances for the source and destination address and subnet values involved. Also, BMC Network Automation attempts to reuse the existing NSX global Application instances for destination port and range values involved. When existing instances are not available, new ones are created at run time within the injection template, named using a prefix of "sectionName:“, and a suffix that identifies the IP Set or Application instance involved. Such newly created instances exist until the firewall is deprovisioned.

You can find sample pod and container blueprints and related templates in the BCAN_HOME\public\bmc\bca-networks\csm\samples\sampleWithNSX directory on the BMC Network Automation application server. The directory contains two types of blueprints: blueprints with firewalls and bronze blueprints without firewalls.

See Pod model and Container model for additional information about the sample pod and container blueprints for use with NSX.

Was this page helpful? Yes No Submitting... Thank you
Last modified by Lisa Greene on Mar 17, 2017
bmc-internal