This documentation supports the 19.02 version of Remedy Deployment.

If you are upgrading to version 19.02 from earlier versions (for example, version 9.1), you must use the upgrade installers to upgrade to version 18.05 and then apply the deployment package.

The upgrades of Remedy AR System, CMDB, Smart IT, and Remedy Single Sign-On continue to be done via installers, directly to version 19.02.

The following sections provide information about the enhancements in the 19.02 release.

Remedy platform and applications now support higher versions of Java and Remedy 19.02 release is certified to be compatible with Oracle Java 11. Due to changes in Oracle's Java release and support strategy, Remedy also supports OpenJDK 11. This allows you to stay on a free version of Java. Remedy does not support Java version 9 and 10 because these Java versions are not supported by Oracle. For more information, see Product announcements.

Similar to the earlier versions of Remedy, during installation of the Remedy AR System platform software, you can configure a compatible 64-bit Java software environment that is to be used by the Remedy environment.

The Remedy 19.02 release provides the following enhancements for the Remedy package deployment capability.

Remedy 19.02 release offers a more flexible approach of installing languages in Remedy. You can now add multiple languages by using a deployment package. The language packs for Remedy platform and applications are available for download from the Electronic Product Distribution (EPD) site.

To identify a group of servers as a logical subset of the server group, you must set the same ranking for the servers in the AR System Monitor form.

The following figure depicts the simultaneous deployment of packages in a server group.

For more information about running simultaneous deployment, see Simultaneously deploy a package across servers in a server group.

The package rollback criteria prevent accidental rollback. The following conditions are applicable when rolling back a package: 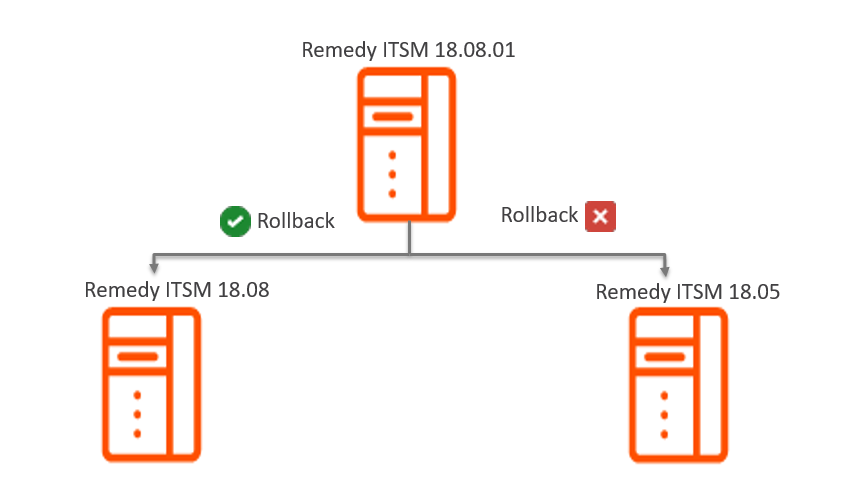 For more information, see Validation for a package rollback.

Logging enabled by default when you import or deploy a package

In this release, note the following significant changes in the product behavior:

The external version number that is displayed on the installer screens and the product pages is 19.02.00. BMC uses version 9.1.07 for internal purposes.

BMC Remedy product version is displayed as 9.1.07 in the following files:

Was this page helpful? Yes No Submitting... Thank you
Last modified by Himanshu Raul on Jul 08, 2020
whats_new enhancements version_19_02