Extended Discovery pattern which allows to build a J2EE inferred model of its Applications and Resources is available for this product.

If the command executes successfully and a result is obtained, then the version is extracted using the following regular expression:-

The ApplicationServer pattern has been created in a manner that allows it to support Windows, Linux and Unix platforms from the same module; a Software Instance is created for each unique server, node and cell combination running on a host.

The Nodeagent and DeploymentManager patterns only identify instances of IBM WebSphere Application Server components on the Unix platform.

The patterns in this module will set the following value for the type attribute on a SI:

The patterns will also create the following additional nodes:

The following processes are identified through the use of Simple Identifiers and are modeled within a full Software Instance for Websphere Application Server using the primary and associate relationships (See 748415854 for more details about the modeling of this product).

Version information for this product is currently collected using one of four possible methods.

For this active versioning technique, an XML file is identified in one of the directories found in the installation directory; the XML file contains information on the version and build of the specific instance of a specific installation.

The file is present in the same location on Windows and Unix and the base directory is identified using the same process, the only difference between the two is the command used to check if the file exists.

The installation directory for Websphere Application Server is identified using the "-Dwas.install.root" argument, by extracting the relevant path we are able to identify where on the file system the process is running from.

Using knowledge that has been provided by a SME we then check for the existence of a product file in the "properties/version" subdirectory.

This product file has a different name depending on the edition of Websphere Application Server that is installed. First we try to find the file using the following command:-

UNIX/Linux: <optional_privilege_escalation>ls %install_root%/properties/version | grep "\.product"In case the command result does not give us the file or the Discovery user does not have sufficient privilege to run this command, we perform a check for each of the known filenames, a full list of the editions can be found in the 748415854 section, below is a list of the filenames we check for.

Each of the filenames is checked to see if it exists, when a file has been found it is opened and the following XPath expression is ran:

Note: this is the XPath query found in the pattern, it would also be valid to use /product/version (without the explicit call of the text() node).

Should the XPath method fail, the pattern attempts the Regular Expression method, applied to the same file.

We have found that this approach provides a version number up to four levels of depth, i.e. x.x.x.x.

If the command executes successfully and a result is obtained, then the version is extracted using the following regular expression:-

The edition is extracted using the following regular expression:-

An additional processing technique is then used on the resulting value to normalise the version so that it is separated using periods rather than - or _.

Depending on the deployment of the product we have found that this approach provides a version number between one and four levels of depth, i.e. x through to x.x.x.x.

If a single package is returned then the version number is taken from it and assigned to the Software Instance.

WebSphereCluster pattern extracts the version from the SoftwareInstance it had triggered off.

The main risk of package versioning is that if more than one version of Websphere Application Server is installed then the version information may not be mapped to the correct instance that has been identified.

The editions available for the current release, 6.x, are:

A full list of the features and differences between editions can be found in the [Appserver Comparison Document|ftp://ftp.software.ibm.com/software/webserver/appserv/was/Appserver_Comparison.pdf] on the IBM website.

To identify the version of the Websphere Application Server we have to have access to the product file mentioned in the Versioning section, if we have access to the file then we use another XPath query to extract the edition information from it.

Note: this is the XPath query found in the pattern, it would also be valid to use /product/id (without the explicit call of the text() node).

Should the XPath method fail, the pattern attempts the Regular Expression method, applied to the same file.

The structure of the WebSphere Application Server Pool is as follows...

An instance of the Application Server needs to have a Node and Cell specified, a Cell must contain at least one node and all nodes must be part of one, and only one, cell.

The Node and Cell are a logical grouping of related Websphere Application Server instances. This allows related Applications to be hosted within the same logical group despite being physically hosted on different machines or even in different physical locations.

Multiple instances of WAS can be run from a single installation on the same machine, as specified they must be part of a unique Cell/Node key, in this manner a machine could have two Node 1's running but they would need to be part of different logical Cells.

The trigger for the ApplicationServer pattern is the core Websphere Application Server product, the pattern triggers only on java commands (java or java.exe) with either 'com.ibm.ws.runtime.WsServer' line in the arguments or if arguments have '-Dwas.launcher.server' line at the beginning. Second attribute was added into the triggers list in TKU-Sep-2013 when IBM has introduced a fix as a work around for command-line truncation.

IBM has introduced a fix in WebSphere 6.0.2 onwards to work around command-line truncation. The reference is here

Due to the nature of the product a check is then made in the body to remove all Websphere Application Server instances that are actually children of the main process.

The pattern produces a Deep (Instance Based) SI for Websphere Application Server where we have been able to gather the required information.

The information that is used for the key in the SI creation is based upon the Server, Node, Cell name and the actual installation path of the software.

The server name, node and cell name are obtained from the trigger process arguments using regular expressions as follows:

When dealing with a WebSphere Network Deployment product, the pattern takes a few additional steps, in order to correctly represent Cells, Nodes and Servers. The Servers belonging to the same Node are linked as Clients to the relevant Node agent, determined by matching cell_name and node_name attributes. Finally, all Nodes belonging to the same Cell are linked as Clients to the relevant Deployment Manager, determined by matching cell_name.

All these relationship end up building a correct model for the Network Deployment infrastructure. The relationship can be mapped across multiple hosts.

IBM WebSphere Application Server(WAS) Cluster can be set up using standard WAS tools. From Administraton Console it's possible to create/clone WAS servers and add them into the cluster. These servers should belong to the Nodes which are parts of the current WAS Cell. Empty WAS Cluster can also be created to add servers in it latter. Load balancing, session replication options can be set during the Cluster creation.

The following model is obtained from BMC Discovery 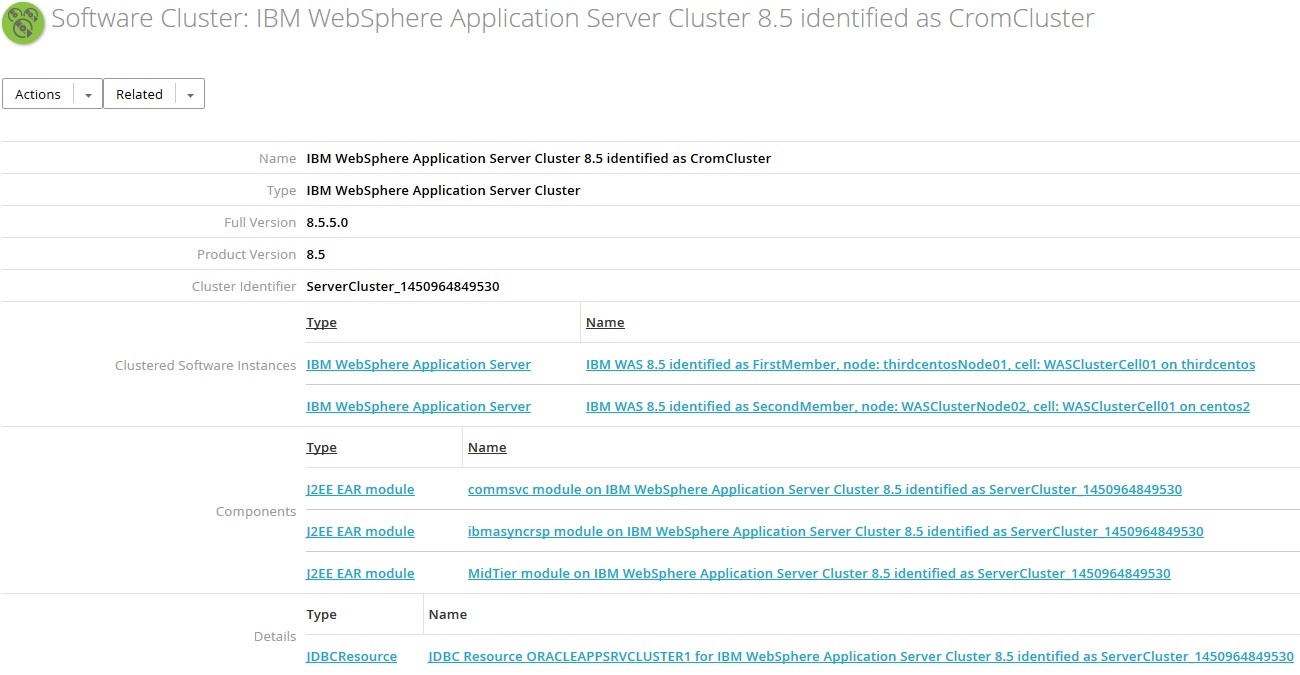 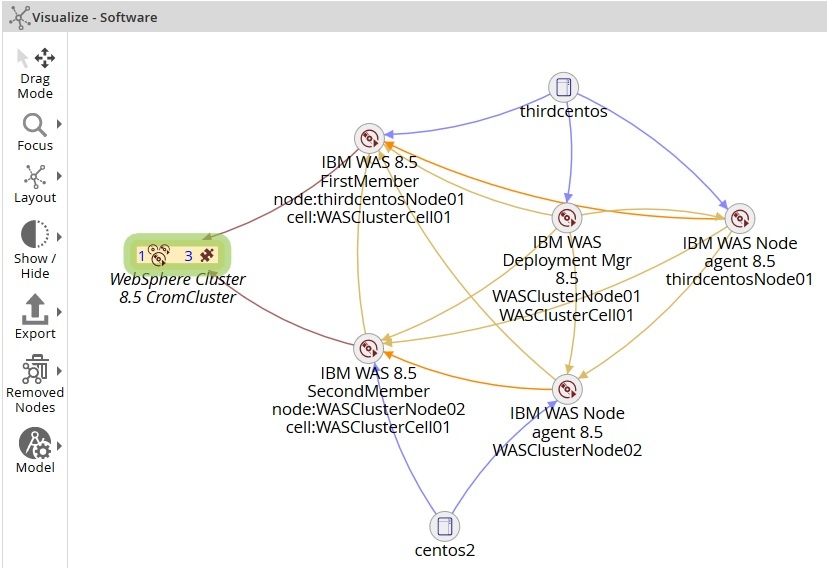 Associate relationships are created between the primary Software Instance and all its Child processes.

The relationship is only created from the Node agent and only when we are confident that we have a valid Node and Cell name for the Node agent, a search is then performed for all other SoftwareInstances within the Datastore that have the same Node and Cell defined.

If a Software Instance is found then the relationship is created.

Firstly the pattern tries to get the profile directory path (in which the current cell is located) from the arguments of triggered process by comparing it against the next regular expression:

If this approach failes the patterns try to compare arguments against another regular expression:

where %install_root% is installation root of WebSphere instance which is found while doing 748415854.

Then the patterns try to obtain "serverindex.xml" file looking for it by next location (only if profile directory path, Cell and Node names are found):

where used variables are:

Finally the port is found after successful XML file obtaining by using the next XPath query against XML file contents (only if server name if known):

where %server_name% is server name of Application Server instance or "dmgr" in case of Network Deployment instance.

(This query will result in number correspondent to port of "SOAP_CONNECTOR_ADDRESS" specialEndpoints node related to current WebSphere instance).

In successful case the patterns populate jmx_enabled attribute (with Boolean "true" value) and jmx_port (with value found by XPath query).

SME input has already been received and incorporated into this pattern, relating to the Active Version Command and Edition identification process.

Further input would be appreciated if they could identify a manner with which we could version the product using other means - such as a configuration file or a process that is not dependent on identifying the installation directory.

This pattern was tested against live installations running on Linux, Solaris and Windows operating systems.