Sometimes a single form can contain all of an application's functionality. For example, a small application that tracks product defects can use a single defect-tracking form to capture and display all required information.

Most applications, however, need several forms to capture, track, and organize information. One or more forms make up the application's main forms (sometimes called primary forms) that users interact with directly. Often, the main form is a console that serves as a navigation and information center. The application can also have other forms, called supporting forms, which supply information needed by the main forms. For example, a service desk form captures information needed to fix a user's computer problem. A purchase requisition form captures the information needed to purchase an item. The following figure illustrates a BMC Remedy AR System form. Each form contains fields. Some fields, known as data fields, capture a certain type of information, such as a user name or problem details, and have their own set of rules about who can view or modify that information (see Field types). Some fields can have attached menus that help users fill in the form (see Field menus).  Example of a BMC Remedy AR System form
(Click the image to expand it.) 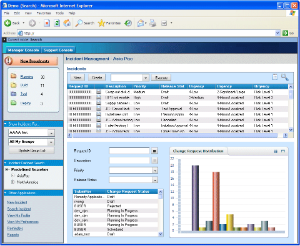 Each form in an application is like a template to capture or present information. When a user opens a form to perform a task, the template is presented to help the user complete the task. When the form is filled in and submitted to BMC Remedy AR System, the system creates a request, also known as a record in database terms.

Was this page helpful? Yes No Submitting... Thank you
Last modified by Prathibha Mohan on Aug 25, 2015