Creating, editing, or deleting a priority
In this topic
Calculating duration from a priority (2020 Release 02)

The displayed language depends on your browser language. However, you can change languages from the Language menu.

Priority hierarchy applies to tickets created from Self Service. The SELF SERVICE group is added to the Group list on the Priority Hierarchy page.

When you create a ticket in Self Service, the priority of the ticket is automatically calculated based on the priority of Category, Location, Department, and Requestor. The calculated priority is already populated when the New Ticket form opens.

The priority of a ticket is calculated every time you:

By default, all groups are assigned the order of precedence in the priority hierarchy as shown in the following figure: 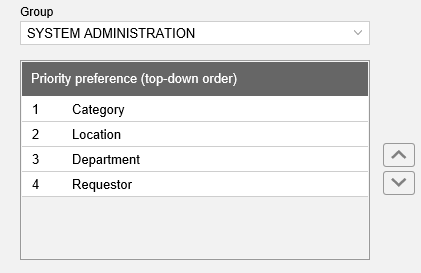 Based on this order of precedence, if the values for the Category, Location, Department, and Requestor fields have a priority, the ticket is assigned the priority based on the selected category. If the category does not have a default priority, the record is assigned the priority linked to the location and so on. By default, the same priority hierarchy is set for all technician groups. However, you can configure a custom priority hierarchy for each group.

Priority hierarchy applies only to those ticket and assignment forms that are opened (for creating or editing) by a technician. It does not apply to records that are created or updated by business rules or templates.

A group has a priority hierarchy set in the following order of precedence and each of the fields have a linked priority:

To define a priority hierarchy for a group

Creating, editing, or deleting a priority

Was this page helpful? Yes No Submitting... Thank you
Last modified by Winner kumar Jaiswal on Dec 09, 2020
administering task

Creating, editing, or deleting a priority
Calculating duration from a priority (2020 Release 02)