This documentation supports the 19.02 version of Remedy with Smart IT.

A series of mixed workload tests were run (online users plus CMDB CI processing) to determine the hardware requirements for each tier of Remedy with Smart IT. During the load test execution, of 2000 concurrent users, 7,500 CIs(90% update and 10% create) were also processed in parallel. Smart IT and BMC Digital Workplace accounted for 85% of the online business transactions run; the remaining 15% were from BMC Remedy IT Service Management (ITSM).

One of the primary focus for 1902 release was the performance of support users with restricted access. The report contains a comparison of critical use cases to demonstrate the performance improvements in 1902 over 1808 as an example.

Performed Smart IT load test with 1000 concurrent Restricted users with 68 percentage of transaction from Universal client (UC) and 32 percentage from Smart IT iPad application. Each Support user had access to 26 End user's companies. Note: Row level Security was default for all the forms.

The following chart shows the end user browser response times for Smart IT transactions measured during the 2000-user load test:

The following chart shows the end user iOS 12.1.1 response times for Smart IT transactions measured during the 2000-user load test. 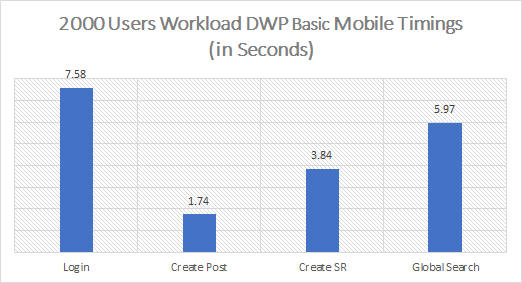 The following charts show the CPU utilization and Available Memory for each tier during 2000-user load test: 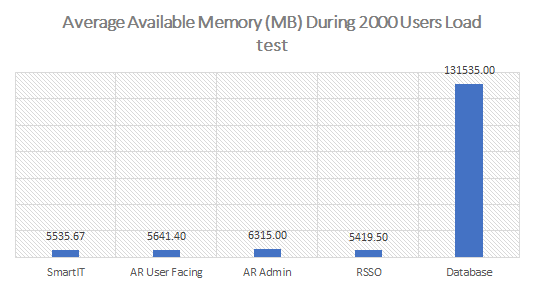 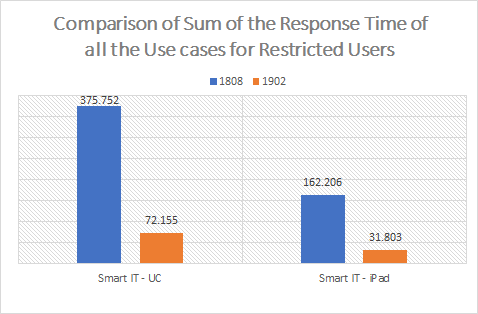 Was this page helpful? Yes No Submitting... Thank you
Last modified by Nilay Agambagis on Nov 11, 2019
bmc-contributor