Key concepts
In this topic
Architecture

This documentation applies to the 8.1 version of Remedy IT Service Management Suite, which is in "End of Version Support." You will not be able to leave comments.

This topic provides conceptual information about the Hub and Spoke capabilities of BMC Remedy IT Service Management (BMC Remedy ITSM).

A Hub and Spoke environment is a logical topology that allows a single service provider company (residing on the hub server) to support multiple operating companies (residing each on their own spoke server).

Service Provider Company and Operating Company have specific meanings in the hub and spoke environment:

When working in a Hub and Spoke environment, when you hear:

There is no limit to the number of spoke servers that a hub server can support. The Hub and Spoke capability is designed so that all transaction processing is handled on the spoke server. The hub server receives only a subset of data from the spoke server, which allows the hub server to easily scale horizontally when there is a large volume of tickets.

Using the Hub and Spoke capability, a member of the service provider's support staff can work with records from any of the operating companies with which the support staff person is registered. The hub system receives and stores only a subset of the data from the original record (company name, client name, record type, and record ID number). The rest of the record's data remains securely on the spoke system. The hub system then displays the transactional data in the corresponding application console on a workstation connected to the hub server. There, a member of the support staff can open the record directly from the spoke server, view the record's details, and work the record through its lifecycle. 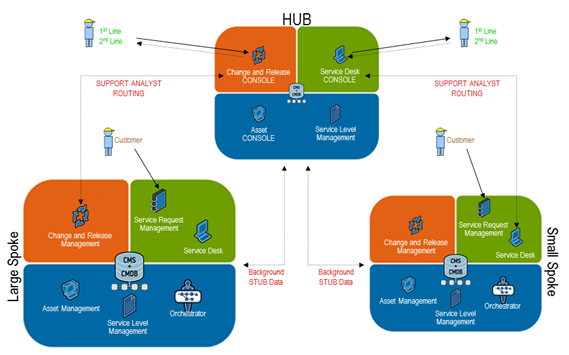 The Hub and Spoke capability is supported from the following applications or consoles:

Setting up the Hub and Spoke capability