This version of the software is currently available only to early adopter SaaS customers as the first step in our phased rollout. Click here to view an earlier version.

According to the business logic that you want to create in a process flow, you may need to create or update record instances of record definitions used in a process. To perform operations such as add, delete, or retrieve a record instance, you can use the Record Service Tasks in the Process designer.

For an example of the Create Record Service Task, see Pushing field values to other record instances.

Get Records By Query properties

Security labels are used to enable the row-level security and define a series of users, groups, or application roles that can be given access to record instances by using a rule or a process. To identify if there is an update to the security label made by Set Security Label or Remove Security Label actions, after the associated record instance is updated, you can use the SECURITYLABELCHNG() function. 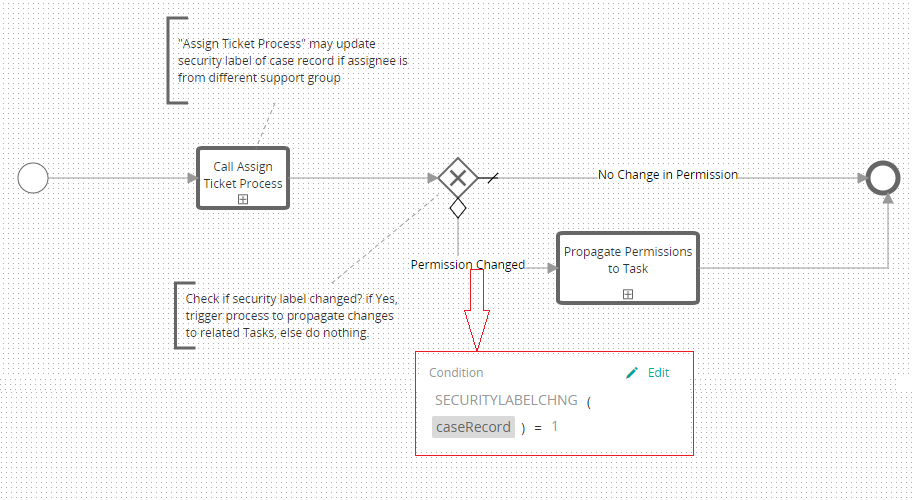 If you have a wait state in the process, for example, User Task or Receive Task, then the SECURITYLABELCHNG() function returns 0 even if the security label is changed.

The following images shows sample configuration of steps Find the Company, Update Company Record, and the No branch of the Found the Company gateway for the above process:

The following images illustrate sample configurations of process variable and process steps for the above process:

The transaction value references the value of the field in the current transaction only. When you create or update a record instance for business applications, you may be required to validate and update the record instance before storing it in the database. In BMC Helix Innovation Studio, a rule has a trigger that is activated on record events. It is recommended that the rule calls a process to perform an action. In the Rule designer, the transaction value is represented by using the Current Record ($ENTRY$) keyword.

To update the transaction record instance through a process, use the Update Record Service Task and select the following parameters:

The following images illustrates a sample configuration to update the transaction record: