You can configure RMGR so that each IMS system has its own corresponding RMGR.

In a legacy multiple-RMGR configuration for an environment in which two or more IMS systems will share data, you must set up a sharegroup and create an RMGR for each IMS that is involved in data sharing. The RMGRs must belong to the same RMGR sharegroup, whether the IMS systems are running on one operating system or on different systems in a sysplex environment. Each IMS system is connected to its own RMGR. One repository is shared by all RMGRs that belong to the sharegroup.

When you configure RMGR for use in a SYSPLEX environment, the procedure is identical to configuring RMGR in a data-sharing environment. You must set up a sharegroup and create an RMGR for each IMS system in the SYSPLEX. 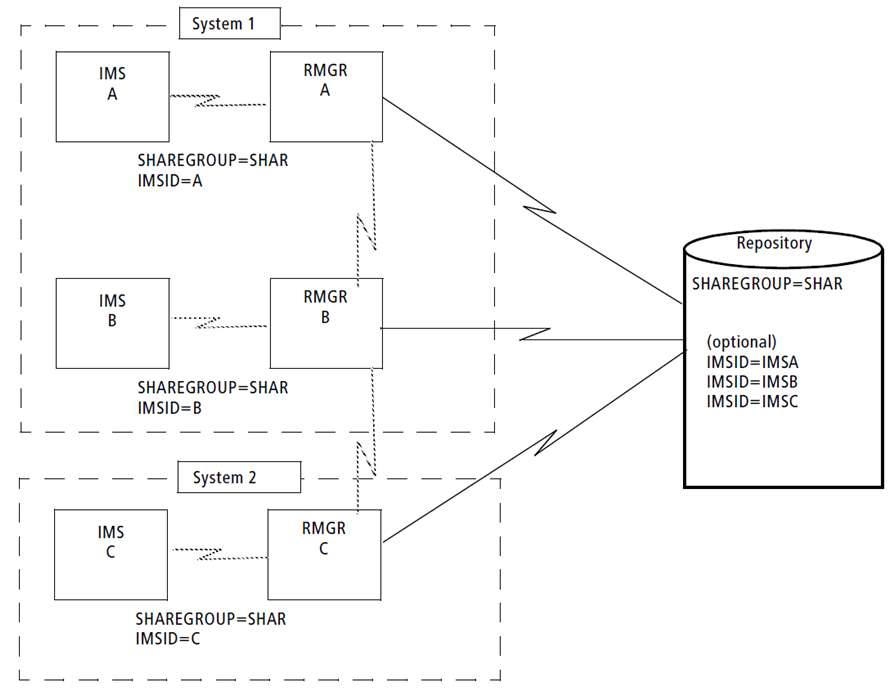 To achieve all of the functionality that RMGR is designed to provide in an IMS data-sharing or sysplex environment, an RMGR instance must be configured and available for each IMS instance that is involved in data sharing. This requirement applies whether an IMS instance is on the same or different system image as the other IMS instances, as long as the IMS instances communicate with each other by using the Cross-System Coupling Facility (XCF).

RMGR provides considerable functionality even if only one RMGR instance is available to participate in an IMS data-sharing environment. The following functions and utilities are available in this case:

To implement a legacy multiple-RMGR configuration

Was this page helpful? Yes No Submitting... Thank you
Last modified by Shubhangi Godbole on Jan 16, 2018