Skip to end of metadata Go to start of metadata
"Moviri Integrator for TrueSight Capacity Optimization – Microsoft SCOM" allows collecting information from the Microsoft System Center Operation Manager tool. It is able to extract and summarize resources performance data, configuration data and relationships among IT entities.

In the following table are shown the Management Packs supported by "Moviri Integrator for TrueSight Capacity Optimization - Microsoft SCOM".

In order to extract virtualization metrics, the connector requires:

The following matrix presents the supported versions of the above-mentioned components.

ETL Module is made available in the form of an additional component, which you may download from BMC electronic distribution site (EPD) or retrieve from your content media.

To install the connector in the form of a TrueSight Capacity Optimization additional package, refer to Performing system maintenance tasks instructions.

Preparing to connect to the data source software

As a first step, please ensure that the correct version of SCOM is installed. You can perform this check from the "About" section of the SCOM Console (as shown in Figure 2). 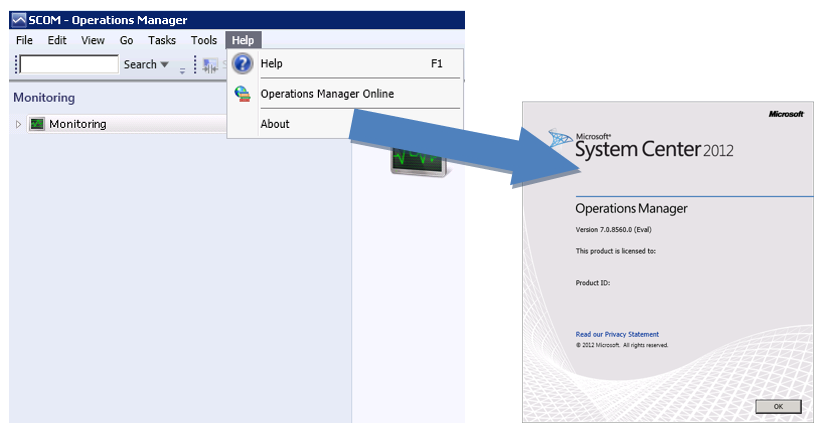 A working network connection between VMM and SCOM is required to have VMM collected metrics available into the SCOM datawarehouse.

The connect SCOM 2012 to VMM 2012 you need to access the VMM 2012 Settings panel and click on "Settings" (Red square), then on "System Center settings" (blue square) as shown in the following figure 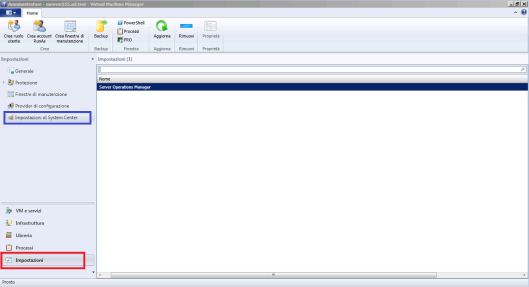 Now you have to click on "System Center Operations Manager", access to properties (by right click), then insert SCOM management server hostname and credentials, as shown in the following figure: 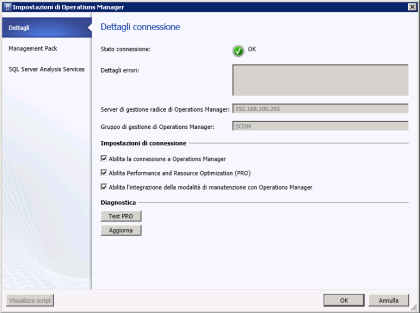 The same steps are valid also for the connection between SCOM 2007 and VMM2008 and shown in the following figure: 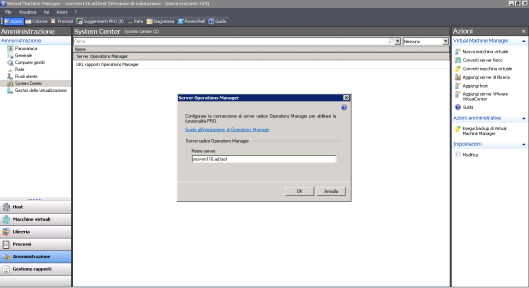 Standard windows management pack do not expose any property to detect if a system is a VM or a physical server, in order to get that information “Moviri VM Detector” management pack enable SCOM to collect the VM technology using a WMI query on all agent monitored systems.

To activate the “Moviri VM Detector” on SCOM

In order to make ensure data is available in SCOM DWH, please make sure that the SCOM Monitoring views do present the relevant metrics by selecting them and setting a proper chart time frame. Please repeat this step for each desired management pack and entity type you are interested in.
As an example, the following figure shows the Host Performance view of the SCOM 2012 Virtual Machine Manager Management Pack. 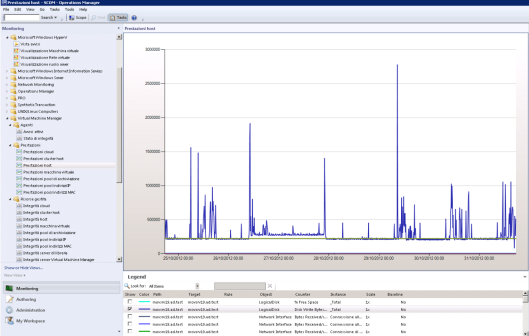 This section describes the available configuration properties for the integrator.

(*)The property "Relocate all series to time zone" has to be filled with the name of the time zone in IANA (Internet Assigned Numbers Authority, see http://www.iana.org/time-zones/) format. Some time zone names examples are the following: Europe/Rome, Europe/London, America/New_York, Australia/Melbourne.
(**)"Compute size and occupation metrics even for aggregated data": some of the metrics the connector extracts are not directly available in the SCOM data warehouse database. They are computed using other metrics – they are called derived metrics (for more details, see section 6.2.3) . It could happen that the base metrics (upon which the derived are computed) are collected from the SCOM Agent at different time instants. In this case, if the connector is extracting data at raw level, the related derived metric will be not computed.

If the connector is extracting data at hour level, there might be a chance that the related derived metric could be wrong, in case the SCOM Agent sample them at different instants. For those reasons, it is possible to choose whether enable or not the computation of the derived metrics, setting properly the "Compute size and occupation metrics even for aggregated data" property.

To give a detailed filter on metrics and management pack, the two properties “Metric classes to import” and “Management pack to import” can be selected independently, but some combination gives an empty metrics selection, the following table can help the user to select them correctly.

Moviri integrator for Capacity Optimization supports the most common Management Packs, the extensible module is a framework that to enable the extension of the metric supported in any Management packs.

Filtering systems with whitelist and blacklist

Figure below shows a configuration example: filtering is active on physical servers, databases and virtual machines. 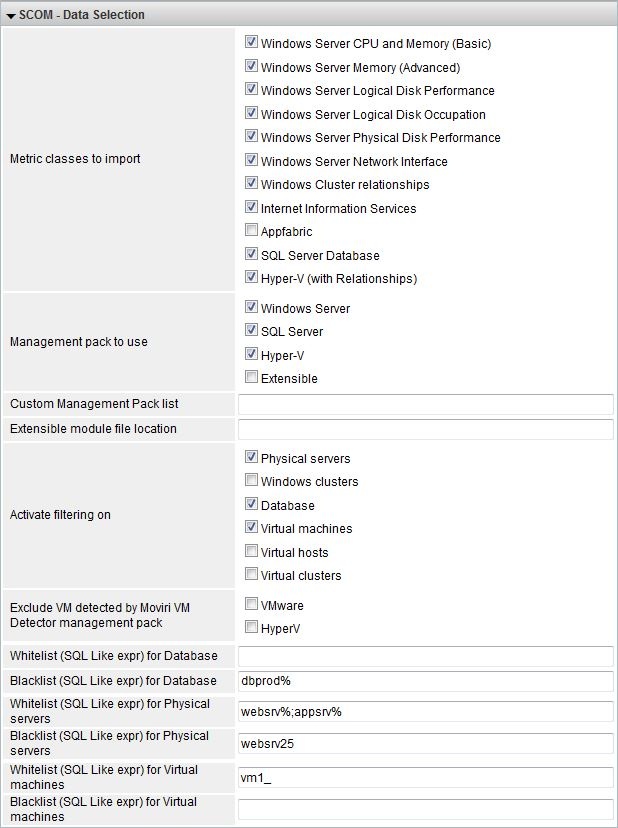 If Moviri VM Detector Management Pack has been installed on SCOM, detected VMs can be excluded from the data import. In order to do so:

The following figure shows an example of a valid ETL configuration. 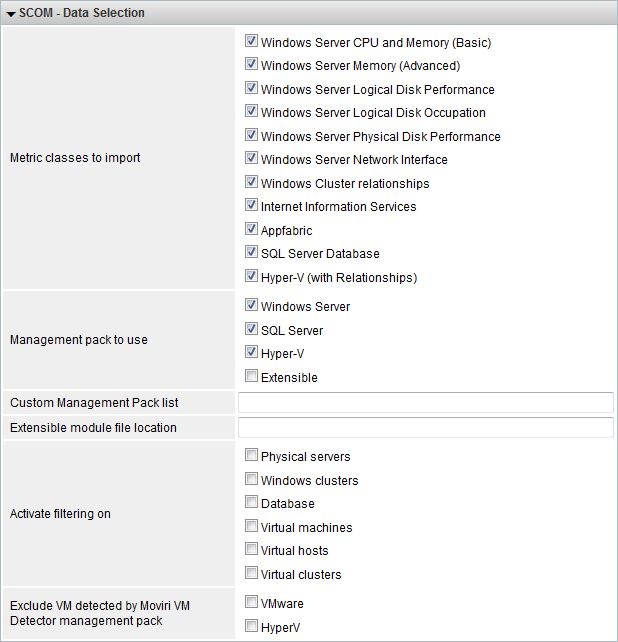 In this particular configuration, the following properties are set:

In order to perform an historical import, in tab "SCOM – Settings " is available the Recovery mode option. When activated, fields "Since date" and "To date" will be shown, and the task imports data for the defined time interval without taking into account the last counters and without modifying them, "max days to extract in a single run" property is ignored too.

Missing data can represent a common problem; as shown above, in this case a WARNING would be associated to the ETL task. This can be due to a number of scenarios, among which:

SCOM managed entities are mapped to BMC TrueSight Capacity Optimization ones according to their Display Name.

Exceptions to this rule are described in the next sections.

This applies for example to Disks, which SCOM models as first-class managed entities (Display Name is for example “C:”) but BMC TrueSight Capacity Optimization treats them as metric subobjects assigned to the host system.

Every Hyper-V hypervisor hosts a particular virtual machine for management purposes, called root (or parent or host) partition. The root partition has the same name of the hypervisor system.

As traditional agents can be installed on this partition (such as SCOM Agent for Windows monitoring), metric clashing could possibly occur if the agent inside the root partition measures metrics that are also provided at the hypervisor level (i.e. CPU_UTIL).

In order to avoid such circumstances and clearly distinguish between the two concepts, BMC TrueSight Capacity Optimization represents root partitions and hypervisors as distinct entities.

To achieve this, the BMC TrueSight Capacity Optimization name of the root (parent) partition is prefixed with a specific label (“Root:”). A prefix is also used for naming lookup: the lookup name is prefixed with the “hvrootpart:” label for this purpose.

Here below some lookup tables as example:

The connector provides a set of object relationships that aims at organizing imported entities in BMC TrueSight Capacity Optimization workspace according to the following rules.

Assignment of imported entities to a specified domain

The connector arranges the collected systems under a domain of choice.

A hierarchy rule associated to the ETL is automatically created by BMC TrueSight Capacity Optimization to process the Object-Relationship data. 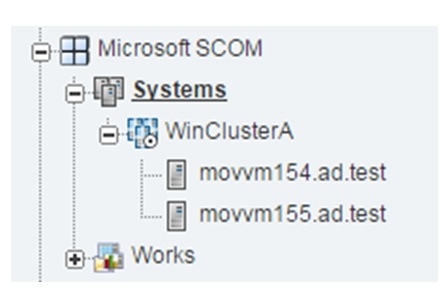 The cluster system which own the nodes relationships could be monitored from others management packs as well, and depending on cluster name configuration, the same cluster can be named with its name without domain or with its FQDN.

Using the default ETL loader settings the domain suffix is not removed from datasource name, and a duplicate cluster system can be created in TrueSight CO. 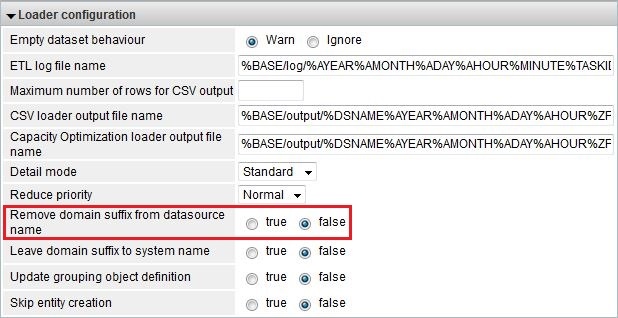 To prevent duplicate cluster system creation, it’s suggested to verify what system will be created running the ETL in simulation mode and looking at the log (if the ETL has already ran, check also the existing system in CO).

When a potential duplicate cluster has been detected, one of the following actions can be performed:

The SQL Server instances are shown in the BMC TrueSight Capacity Optimization tree as children of the host on which they are running (Figure 25 – SQL Server tree exampleFigure 25). 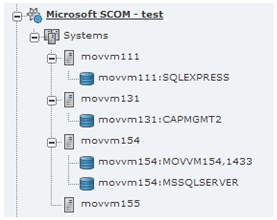 In the above figure each host has one or more SQL Server instances.

The connector also imports, for each database, data about filegroups. Filegroups are represented within BMC TrueSight Capacity Optimization as subobject of the SQL Server instances.

Hyper-V entities are organized according to the following relationships:

An example of such relationships is presented in Figure 26. 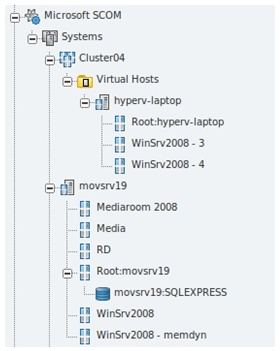 A relation among the Hyper-V host and its root partition is also provided.

(Q2) list all PERF objects and counters given a MP

(Q3) list all systems with max data timestamp given a combination of MP, object, counter

FROM Perf.vPerfDaily prv WITH (NOLOCK)

(Q5) list all systems with value and validity period given a combination of MP, Propertyname