Configuring the users or users.local files

About the configuration files

The exports, users, users.local, secure, and securecert files reside on each server (that is, each machine where an RSCD agent is installed). The secure and securecert files are also installed for each client installation, even if there are multiple client installations on the same machine. The secure files on both the client and server configure how clients communicate with servers.

The configuration files function as follows:

The following graphic illustrates how the secure, exports, and users configuration files work together to control access to a server. 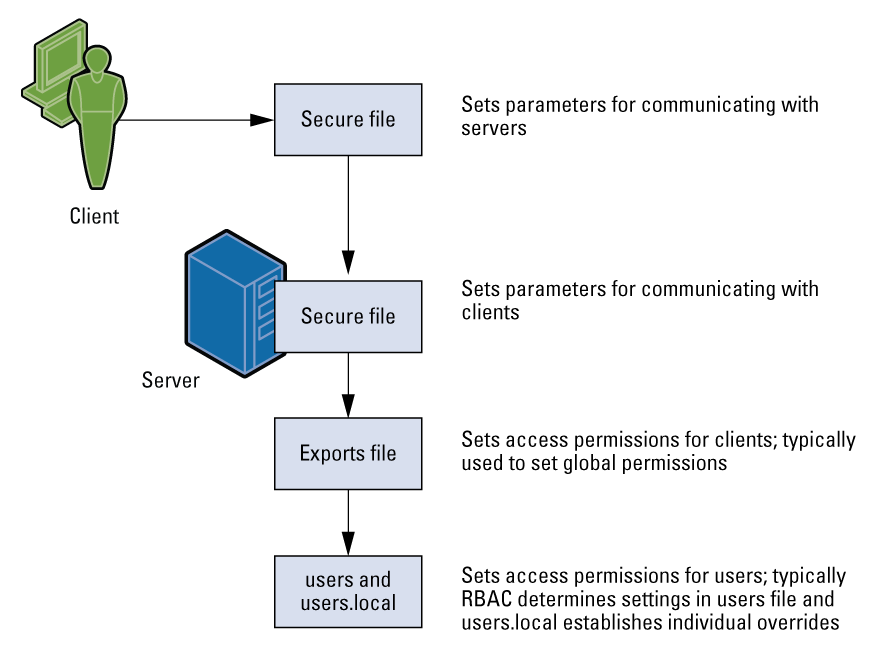 When a client connects to a server, the client user can be granted permissions on the server using two approaches: through configuration files on the agent (a process called user privilege mapping) or through Windows user mapping.

In BMC Server Automation, the standard approach to granting user permission on managed servers is user privilege mapping. It uses a combination of the exports, users, and users.local configuration files. Together, these files define what permissions apply during the connection. This approach should always be used in situations when a user:

The @ symbol indicates that a subnet is being defined. After the IP address or host name, provide the number of bits in the mask. For example, a subnet with a subnet mask of 255.255.255.0 might look like the following:

When a client contacts an RSCD agent, BMC Server Automation uses the following algorithm to determine whether a user has permissions for accessing the agent: