These models are useful for getting business driver projections, sales and economic forecasting, stock market analysis. Many methods can be used to model and forecast a time series, such as ARIMA models, Multivariate Models, and Holt-Winters Exponential Smoothing. In general, the selection of the technique to use is based on the application and the user's preference.

By default, BMC Capacity Optimization automatically identifies the specific algorithm that achieves the best performance in predicting the given time series, based on the characteristics of the data (see Automatic algorithm). However, you can instead define the specific algorithm for a time forecasting model. For information about the behavior of and when to use each BMC Capacity Optimization time forecasting model algorithm, see:

The following examples demonstrate the utility of time forecasting models.

You want to avoid saturation of a system resource such as memory, and you can track and predict the following metrics for the resource:

Because usage metrics typically exhibit an increasing trend over time, applying a time forecasting model is particularly useful in predicting these series.

At particular points in time, you want to increase the amount of total available (total configured) memory to support increasing demand, as shown in the following figure. 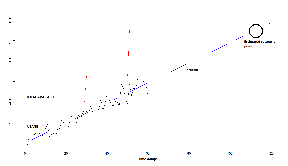 However, applying a time forecasting model to the amount of a resource that is free is not as useful because a free resource metric is calculated from the other metrics. The mathematical dynamics — for example, possible non-monotonicity — of these types of metrics negatively affect the accuracy and reliability of the time forecasting model algorithms.

Based on the internet usage between August 2007 and December 2007 (indicated in blue), you want to predict the trend for the first month of 2008. This model has been fitted with a robust linear regression, the solid green line in the following figure, which indicates that usage will continue to increase in a linear fashion in the next month. The upper and lower confidence bounds for this prediction are indicated by dashed green lines.

A forecast of orders to be received in time is required. As shown in the following figure, the time series has a sudden surge in the demand in the month of June. In this case, fitting the model with linear regression from the beginning of the time series, as in Example 2, is not useful because it does not take into consideration the sudden surge in June. To generate an accurate prediction that reflects this increase, this model has been fitted with a robust linear regression of the data from where the algorithm automatically detected the change in data behavior. 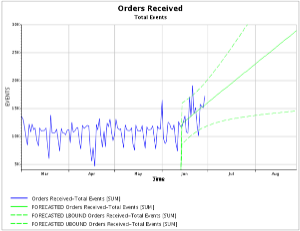 After the predictions have been performed, you can perform a what-if event analysis that clarifies how the given predictions change with events occurring in the system and in business driver data. These events can be of various types, such as an increase in CPU speed, a hardware upgrade, or an increase in storage size.

Consider a scenario in which the allocated usable disk space is being forecast, as shown in the following figure. The prediction shows a saturation of the resources in the beginning of June 2009. 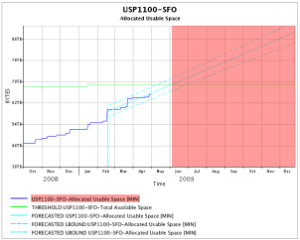 If storage undergoes a planned increase in mid-May, the prediction would change, as shown in the following figure. 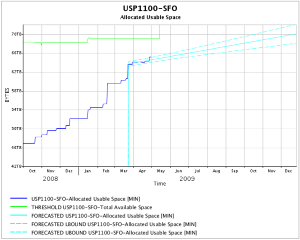 In this scenario, you can clearly see that with an increase in usable storage space, saturation will not occur until at least December 2009.

For information about how to manage time forecasting models in BMC Capacity Optimization, see: