The goal of this page is to help you to understand the results your security audits, to determine which items are valid, and which are false positives, that is those which are incorrectly reported as vulnerabilities.

BMC Atrium Discovery customers typically run a 3rd party application to determine if there are any vulnerabilities in the operating system. These tools, such as Qualys, eEye Digital Security Retina, and Tenable Nessus, check the versions of the packages installed against a known database of vulnerabilities. This database is a combination of their companies' intellectual property and those in the public vulnerability databases such as the Common Vulnerability Engine (CVE) - maintained by the MITRE corporation) and the National Vulnerability Database (NVD).

Often these tools are not aware of the method Red Hat uses to apply functionality and security fixes. As a standard, Red Hat chooses a fixed point to release a new major version, for example, RHEL 5.0. All packages included in the release are then fixed at the level of functionality available upstream at the time and Red Hat will only apply fixes to the versions. Upstream is the term used to refer to the open source projects that do the development work on the packages employed in Red Hat, such as the kernel.

This causes issues with some of the vulnerability assessment tools as they are not "Red Hat aware". Take for example the bzip2 package. The version installed at RHEL 5.7 is 1.0.3-6.el5_5. A vulnerability (CVE, NVD) was found in all versions of bzip2 before 1.0.6 that could cause a Denial of Service (DOS) attack. The tool would identify the fact that the Red Hat installation has version 1.0.3 installed, which appears to have the vulnerability. However, the fix was applied by Red Hat in version 1.0.3-6.el5_5. This is a false positive.

How to determine a false positive in an OS audit

The following examples describe the methodology you should employ in determining whether an alert is a false positive or not.

This is an excerpt from the output of a vulnerability reporting tool:

The first step is to check the details on the CVE page. To find this page, check the MITRE CVE site and search for the CVE number. Entering the CVE number (CVE-2009-0688) in a search engine should also find the CVE. The CVE shows that Red Hat have released a statement, a Red Hat Security Advisory (RHSA) describing the vulnerability: 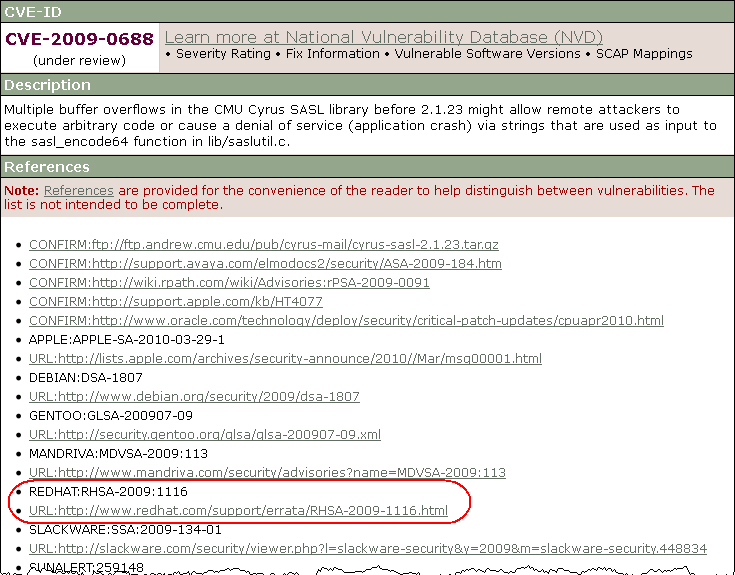 The RHSA tells you what version of the package the bug is fixed in.

The edition of Red Hat we are running is referred to as Red Hat Enterprise Linux Server, all other editions can be ignored (Workstation, AS, ES, EUS, Long Life, WS, and so forth). Search for the x86_64 version (Intel/AMD 64-bit). See the example below: 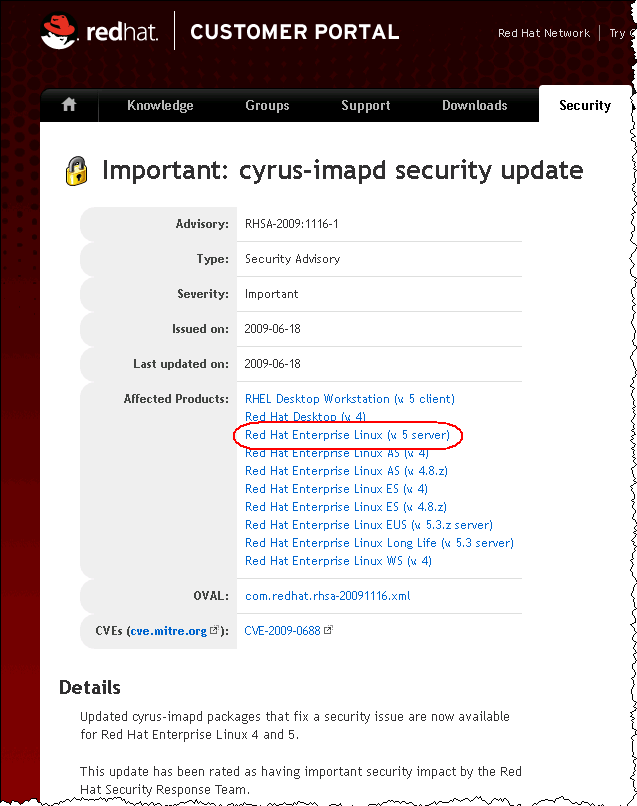 The details or descriptions provided in the RHSA and CVE contain much useful information. Often Red Hat will provide reasons why the specific package is affected. Occasionally the CVE will indicate that the issue is with a specific package, as shown in this example where the CVE states that the Cyrus SASL library that has the issue. Red Hat, however, have fixed the issue in the cyrus-imapd package rather than the cyrus-sasl package, the detail of which is described in the RHSA details section.

Now that the version of the package in which Red Hat have fixed the vulnerability is known, we must confirm that the package is updated in the latest version of BMC Atrium Discovery. In the following example, we can check whether or not the packages are installed. As all the affected packages listed on the RHSA page start with cyrus-imapd it is simple to search the entire RPM database and grep for the prefix rather than search individually:

The package does not appear to be installed. Performing a wider search just for cyrus shows the cyrus packages installed:

The cyrus-imapd package is definitely not installed, so the issue cannot affect BMC Atrium Discovery. This issue can be reported as a false positive.

Sometimes it is not immediately obvious whether or not the issue affects Red Hat and careful attention needs to be paid to the CVE detail.

This is an excerpt from the output of a vulnerability reporting tool:

The first step is to check the details on the CVE page. Immediately it is evident that there is no REDHAT entry listed. The closest thing is Fedora which is another Linux distribution sponsored by Red Hat. 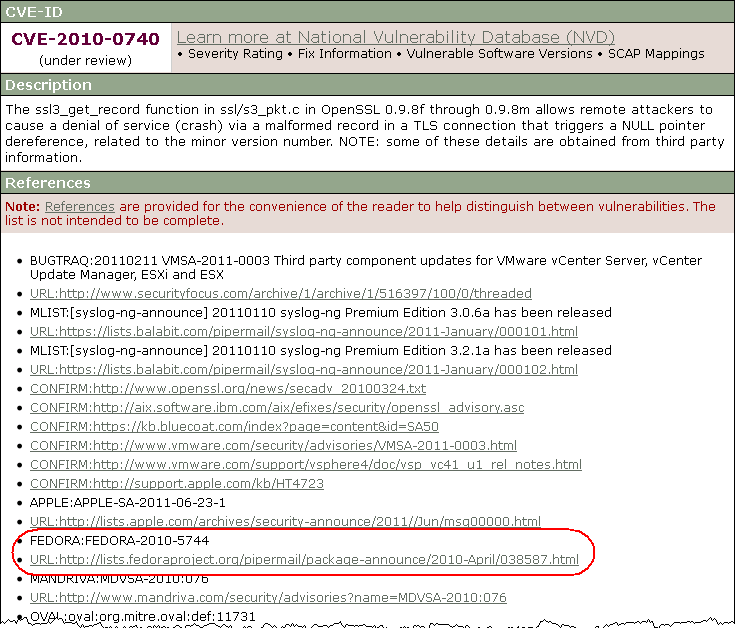 The report states that the we should upgrade to version 0.9.8n or later. The following example shows checking the version currently installed.

Note: In this example, the same version of the package is listed twice. This occurs when both 32 and 64 bit packages are installed.

The version running is 0.9.8e, which is definitely earlier than 0.9.8n, the version the CVE recommends. Red Hat however have not provided a fix. Possibly one was never required. Careful reading of the CVE description offers a clue.

The ssl3_get_record function in ssl/s3_pkt.c in OpenSSL 0.9.8f through 0.9.8m allows remote attackers to cause a denial of service (crash) via a malformed record in a TLS connection that triggers a NULL pointer dereference, related to the minor version number.

According to the CVE description the vulnerability exists in versions 0.9.8f through 0.9.8m. The virtual appliance is running version 0.9.8e so the vulnerability that was created in the changes from e to f does not affect our version. Again, the issue cannot affect BMC Atrium Discovery and can be reported as a false positive.