This section provides a detailed description of the export process and the format and function of mapping files.

The most complicated part of the export process is the restructuring of data. Each record in the BMC Atrium Discovery dataset specified in the mapping file is converted by the exporter into a set of configuration items (CIs). One CI is conceptually similar to a record in a table. A set of CIs can be thought of as a set of records in various tables that are linked by foreign keys. For example, a set of CIs could contain one host CI, four IPAddress CIs and a CPU CI.

Each set of CIs has one Main CI. All of the others are sub CIs. In the above example, the Host would be the main CI, and the IPAddress and CPU items would be sub CIs.

During the export, each record of the BMC Atrium Discovery data set is converted into one set of CIs. Each set of CIs is exported together. If the export of any CI in the set fails, then the whole set is rolled back. For example, if the CPU CI in our example cannot be inserted because a required field is left blank, then the Host and IP Address items will not be inserted either.

An overview of the process for retrieving, restructuring and exporting the data for each mapping file is shown in the figure below. 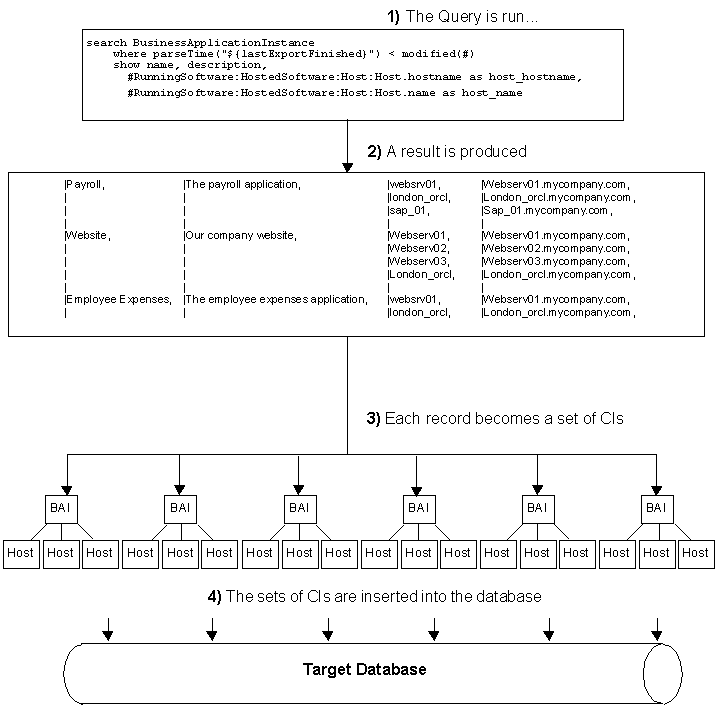 There are four key steps in the process:

Export is not synchronization

When BMC Atrium Discovery data is exported, the appliance does not delete any previously exported data on the target system. For example, when exporting to an RDBMS, you need to perform a manual table truncate procedure to remove the data.

This section provides an introduction to the mapping file format. It corresponds to step 1 in the Key Steps diagram above. For further details about the sections of the mapping files see A Closer look at Mapping Files.
Each mapping file is made up of two sections, the query section and the transformation section.

The following diagram shows the Query and Transform sections of a default mapping file. The diagram also shows the way the transformation section is divided into Main and Sub CIs. 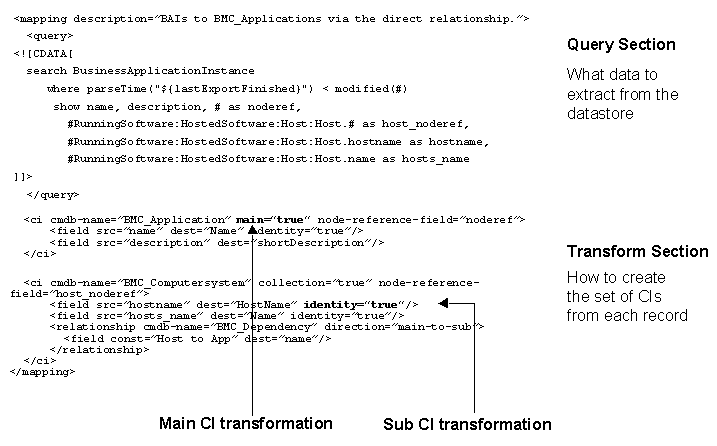 This section describes step 3 in the Key Steps diagram above.

The first two fields (Name and Description) have returned one value per record. The next two fields, on the other hand, are the result of key expression traversals over a relationship. They each return a sequence of values: one value per relationship that was traversed. They are the result of traversing all relationships of the type RunningSoftware:HostedSoftware:Host from the Business Application Instance (BAI). (There is no need to use explode to cause the key expressions to be treated as separate rows in the output.)

The first BAI (Payroll) had three such relationships, and so the host_hostname and host_fqdn fields returned three values each for that BAI's record. The second BAI (Website) had four such relationships, while the last BAI (Employee Expenses) had two.

Using these corresponding sequences, we can compile a list of Hosts that are related to each application. In our example, the Payroll application could be described as follows:

We have taken one record from the result set and pivoted it, generating a Business Application Instance CI and three Host CIs from the record. This is how the transformation process works. Consider the following CI declarations from a mapping file (this is described in more detail in A Closer look at Mapping Files).

The first CI (the one declared "main") is the principal CI that this mapping file is concerned with. It is typically the node from which the various traversals start.

The sub-CI ("host") is generated from other fields in the result set. If its fields return sequences then you will need to set "collection='true'"; if you only expect one value per field then you can leave that declaration out.

The "relationship" element in the sub-CI tells the exporter how your main CI and sub CI are related. It is used when exporting to systems where the relationship has a name, such as Atrium CMDB. For the simpler adapters (such as CSV and RDB) it is ignored. If you intend to use the mapping file for these adapters only, you still need to specify the relationship, its name and direction but you can specify any values.

In order for the Exporter to validate mapping files, at least one field in each CI must be given the attribute "identity='true'".

A closer look at mapping files

Query section and the use of timestamp

A sample of the Query section of the mapping file is shown below:

The Query section is built up of search service functions. For more information on how to build search queries, see the Using the Search and Reporting service.

The following search service functions are not supported by BMC Atrium Discovery Export:

In the query section, the exporter makes a variable available that contains the time at which the exporter was last run. This variable is called "lastExportFinished" and is used with the function parseTime as follows:

This generates a timestamp that the datastore can recognize.

When this variable is encountered, the exporter substitutes the variable with the date that it was last run. The exporter then sends the search query to the datastore.

By unchecking the "Export changed items only" check box, the exporter will set the lastExportFinished to 1 Jan 1980. This will result in a full export.

This variable can also be used with search services functions inside mapping file queries. For example, it can be used to filter on changes in dependencies between BAI and software collection.

The transformation section is made up of a number of CIs. Each CI has a name (cmdb-name) and a number of field elements. There is one main CI and zero or more sub CIs. There can only be one main element (it has the attribute "main" set to true).

In this section of the mapping file, the main attribute is set to "true", indicating that this is the main CI.

The name of the CI on the remote computer is BMC_Application.

The set of fields with identity = 'true' together uniquely identify this CI. Identity tags can be set on one or more fields.

If more than one field has "identity='true'" set then the exporter will only overwrite an existing item if it has identical values in all of the identity fields. In other words, multiple identity fields cause an AND operation, not an OR.

Errors during the mapping validation phase

Errors might be raised during the mapping validation phase. The following table describes these possible errors.

Click here to show an example of the XSD that describes the format of the mapping files.
Was this page helpful? Yes No Submitting... Thank you
Last modified by $page.lastModifier.fullName on Jan 27, 2015