IBM Power Systems are Power Architecture-based servers that run AIX or Linux operating systems. Power System discovery extends the discovery of the AIX LPARS and WPARS (kernel virtualization) and Linux LPARS to include dependencies between applications running on LPARs and physical networks and storage that they rely on.

In a Power System, the frame (modeled as a Host Container node) contains one or two Virtual I/O (VIO) LPARs and a number of host LPARs. The frame also contains a hypervisor that enables direct communication between LPARs. The VIO LPAR controls host LPARs access to the host container resources (disk, I/O) and acts as a network bridge between the internal VLAN (on which the VIO server is connected) and the external physical network.

Multiple frames can be managed by a Hardware Management Console (HMC) a separate host that is used to configure and manage logical partitions, move running LPARS within a frame, and workload sharing and balancing.

In some early versions of HMC, hmcbash shell does not exist. HMC hosts which do not have hmcbash installed cannot correctly interpret the Discovery commands and are therefore not supported by BMC Atrium Discovery.

The Virtual I/O (VIO) Server is implemented as a management software layer that runs on top of an AIX 5.3 OS instance. The VIO management layer is not used for discovery; rather, the underlying AIX instance is used. The VIO management layer provides command line access using the ioscli command, which is a limited and restricted shell environment. The restrictions on users of this shell make it unsuitable for discovery by BMC Atrium Discovery (for example, key commands are unavailable and shell I/O redirection is not permitted).

In order to discover a VIO server you must add a normal UNIX user to the underlying AIX 5.3 instance, which requires root access. To obtain root access, you must either log into the AIX 5.3 instance directly as the root user (if such access has been enabled, it is not enabled by default) or log in to the VIO restricted shell and "escape" to the "OEM environment" using the following command:

After you have root access, you can add the discovery user using the useradd command as you would for any other AIX host:

You are prompted twice to enter a new password.

After the user is configured and a corresponding credential added to BMC Atrium Discovery, VIO Servers are discovered using the standard AIX discovery scripts. A discovered VIO server is shown in the following screen. 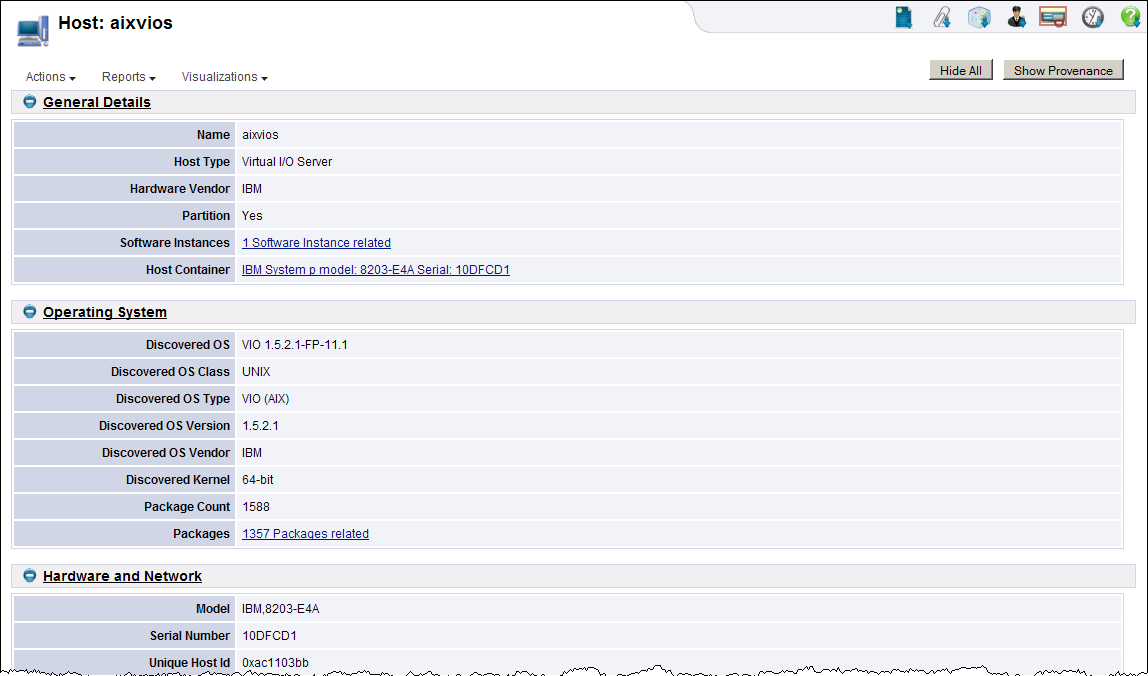 It is also possible to avoid adding the local UNIX user account by escaping to the OEM environment in the standard AIX discovery script. However, this would give BMC Atrium Discovery unrestricted root access to the operating system. This would also affect normal AIX hosts (where the oem_setup_env command does not exist). However, in this case you might only receive a runtime error message that you can ignore. It is not possible to detect the presence of oem_setup_env on the VIO server due to the shell restrictions.

The Hardware Management Console consists of a dedicated host with application software that runs on a Linux OS instance. The HMC layer provides command line access, but only in a limited and restricted shell environment. Unlike the VIO Server, this environment is sufficient for discovery by BMC Atrium Discovery with the following caveats:

The HMC management software SI contains the details on the hosts, host containers, and Power Systems that the HMC is managing. The Power Systems are represented as Detail nodes, as illustrated in the following screen. 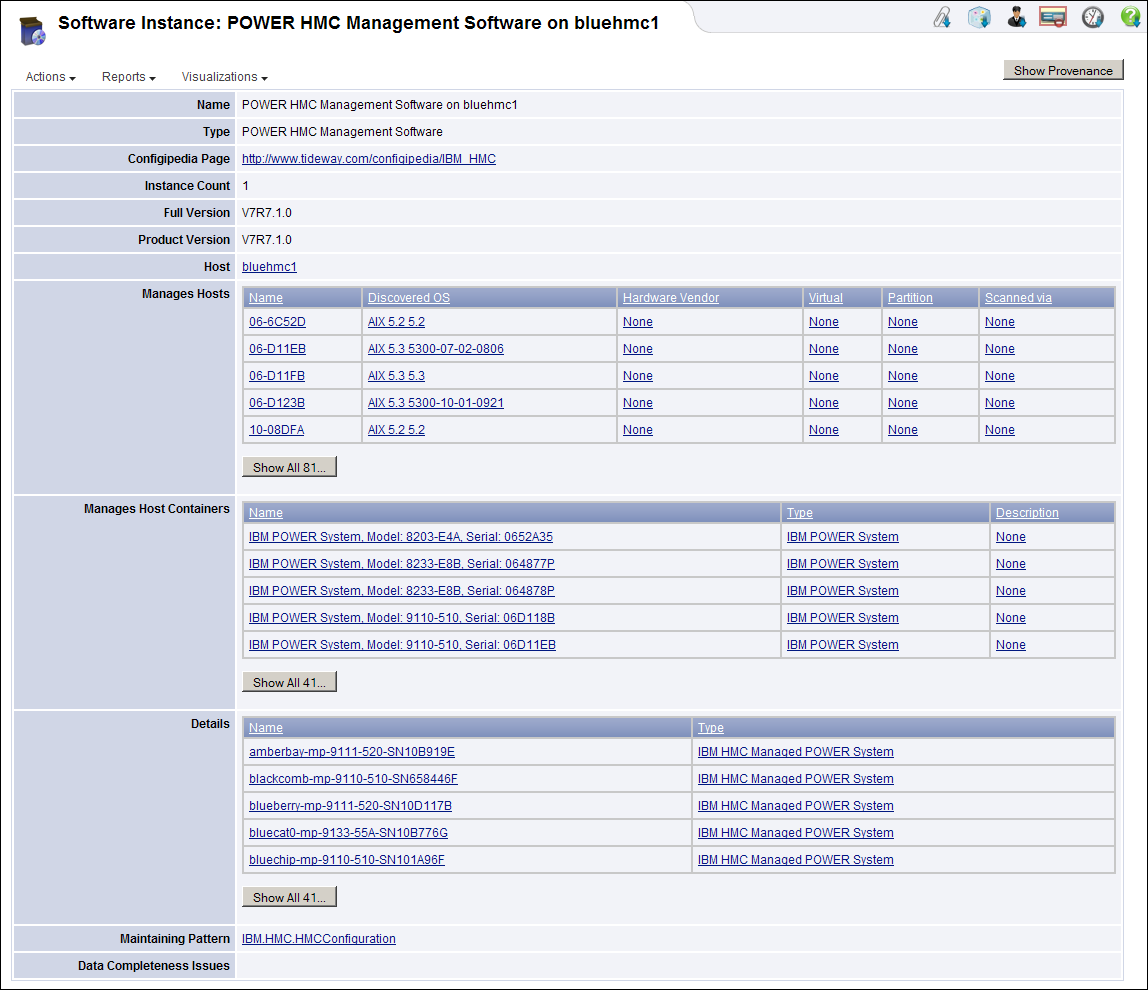 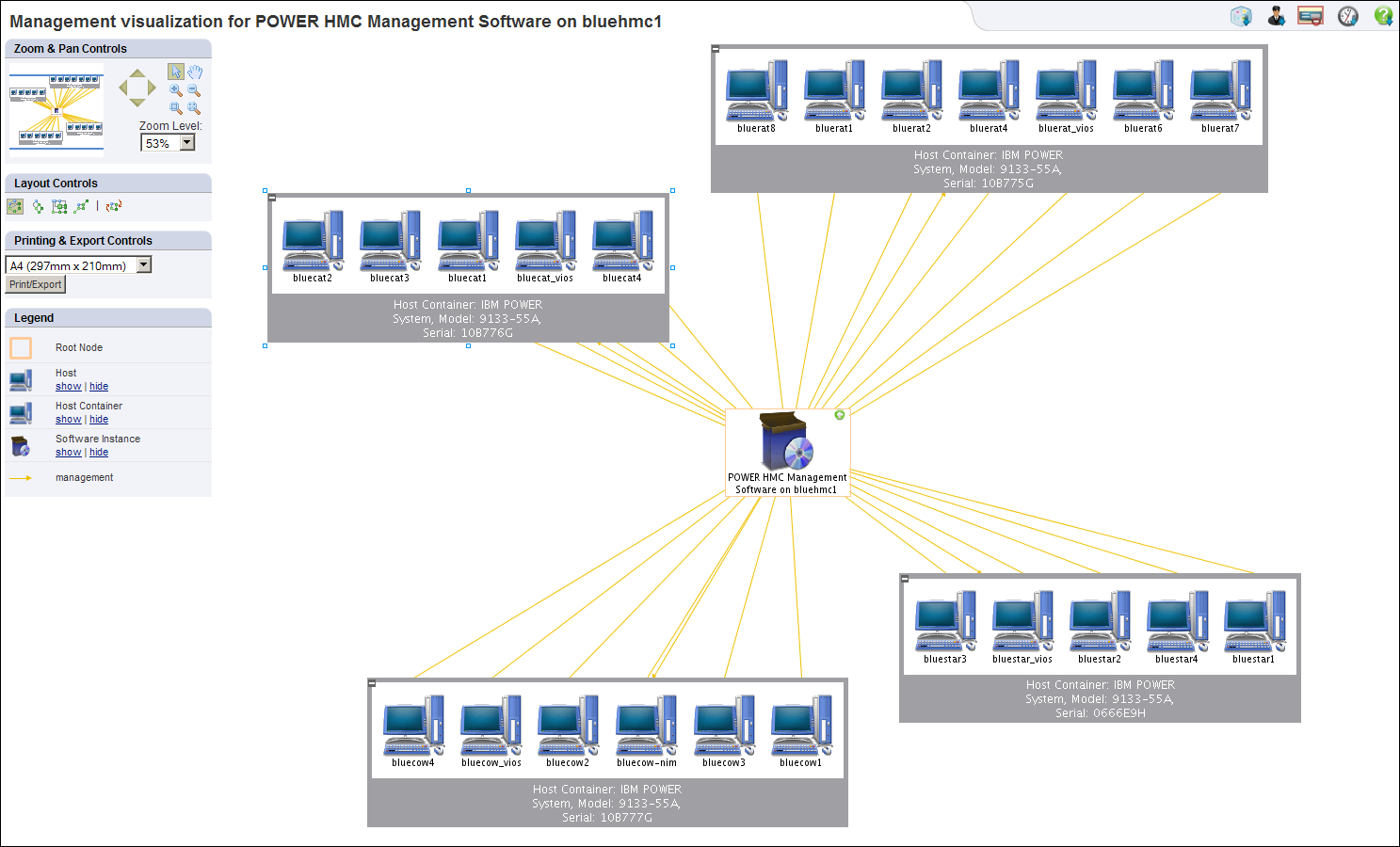 Was this page helpful? Yes No Submitting... Thank you
Last modified by Manisha Moon on Jul 08, 2013