The data model in BMC Atrium Discovery is unique in the way it allows the data produced to be represented in a consistent and understandable manner.

The data model stores different types of related data in separate areas of the model. This allows a high degree of clarity in what a particular piece of information represents and where it came from.

The main types of data represented in the model are:

Directly Discovered Data is data that the Discovery Engine has discovered; it has not undergone any processing beyond simple parsing. Everything that the Discovery Engine finds that may be of interest is stored, regardless of whether it is understood or not. It is stored in a structured form that can be queried and reported on, making it easy to construct certain kinds of discovery reports, and aids in developing new patterns.

Network connections and listening ports are stored as nodes and related through DiscoveredList nodes to the respective DiscoveryAccess node. Patterns take the raw discovery data and use it to relate nodes together and add it to the model of the environment.

Discovery information is aged and removed over time. BMC Atrium Discovery supports a simple aging strategy that removes all information on discovery accesses that are older than a certain age, and the associated directly discovered data nodes.

Inferred information is information that is reasoned from directly discovered data, and it is this information which will be of primary interest to most users. These include items such as Hosts, Subnets, SIs (Software Instances), and BAIs (Business Application Instances). Switches are not inferred, they are imported.

The inference of any type of node can be controlled by the user by writing patterns which are run by the reasoning engine. It includes classifications of discovered processes, groupings of discovered information into running instances of products, and so on.

By linking data items and their attributes to the evidence for them, BMC Atrium Discovery enables its data to be easily verified; a prerequisite for trusting it. This feature is called "Provenance".
Provenance Data is created by the Reasoning Engine and consists of relationships between Directly Discovered Data items and entities inferred from them – a relationship back to the source from the inferred entity. For example, there is a provenance relationship between each Software Instance (SI) and the data that caused the SI to be inferred – typically one or more processes, files, or the like.
Provenance information is meta-information describing how the other information came to exist. It is generated as Reasoning builds and maintains the model. Provenance information is stored as relationships in the model. 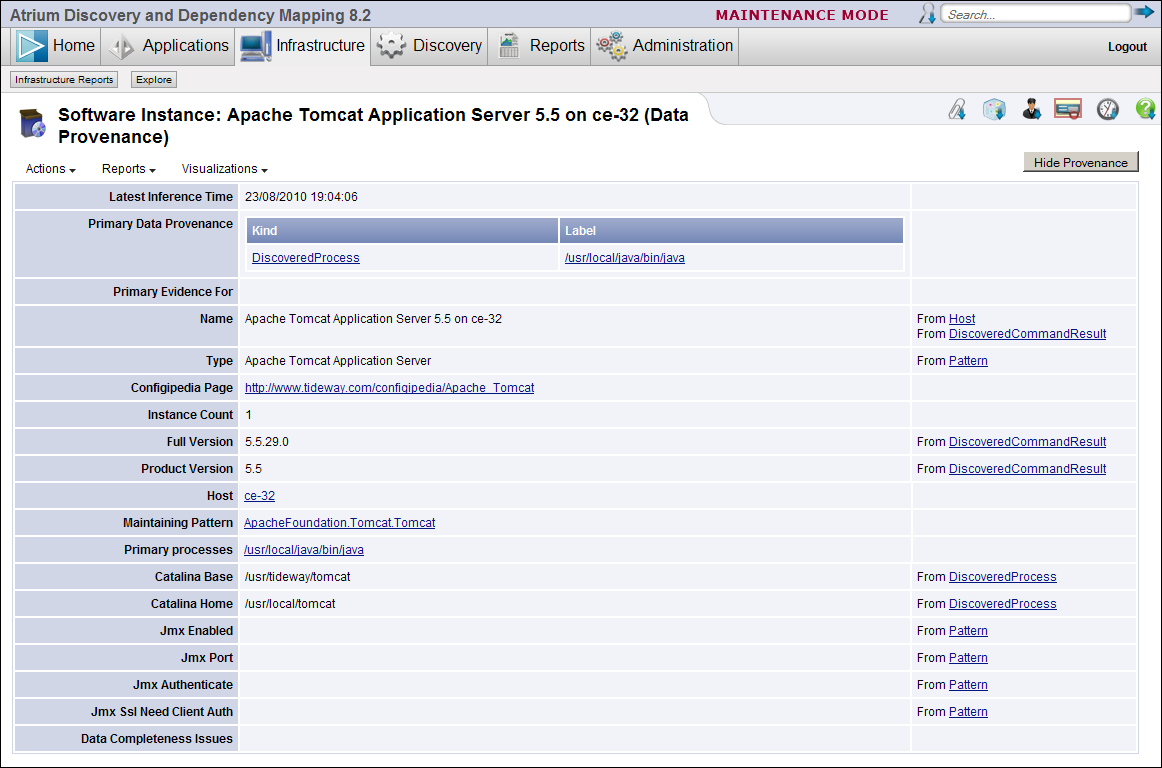 For example, the following illustration shows the relationship between a Subnet and Network Interface derived from the data model.

Was this page helpful? Yes No Submitting... Thank you
Last modified by Bob Massa on Jan 05, 2011

The Discovery Engine
The Reasoning Engine