All data collected can be analyzed using TrueSight Capacity Optimization tool, in order to:

The connector supports configuration parameters that allow systems and metric collection filtering, historical recovery, limiting data volume processed in a single run, specifying data resolution and many other settings. The documentation is targeted at TrueSight Capacity Optimization administrators, in charge of configuring and monitoring the integration between TrueSight Capacity Optimization and HP Reporter.

In order to collect data and relationships between IBM LPARs and Frames, the following product needs to be installed on monitored LPARs: HP Operations Smart Plug-in for Virtualization Infrastructure for HP Operations Manager

ETL Module is made available in the form of an additional component, which you may download from BMC electronic distribution site (EPD) or retrieve from your content media.

To install the connector in the form of a TrueSight Capacity Optimization additional package, refer to Performing system maintenance tasks instructions.

Preparing to connect to the data source software

As a first step, please ensure that the correct version of HP Reporter is installed. You can perform this check from the "About Reporter" section of the Console:

Please also ensure that the DBMS version is compliant with the aforementioned list.
By default, HP Reporter is configured to permanently store in its database the data that is collected from agents only for a set of predefined metric lists:

These metric lists include only a subset of the metrics that can be imported by "Moviri Integrator for TrueSight Capacity Optimization - HP Reporter". Please refer to HP Reporter official documentation for additional information.
In order to properly set up the HP Reporter data source for integration in CO, the following set of metric lists should be created (names are suggested):

Access to the HP Reporter console is needed to perform the above operations.
In HP Reporter, you can either create a new metric list as a copy of an existing one, or from scratch. Please refer to Section 9 for the full range of CO-mapped metrics.
After the creation of the metric lists, they need to be added to Discovered Systems > Metric Lists (by drag and drop); eventually Run All button must be pushed in order to build proper tables inside Reporter database.
The TrueSight Capacity Optimization ETL should access the data source by means of a database user having read-only access rights on the schema (and therefore, the tables) containing the data to be collected. The database user should be created directly on the DBMS (by the Database Administrator), and not from the HP Reporter Console.
The procedure, according to HP Reporter manual, should proceed as lsited below for each new metric list: 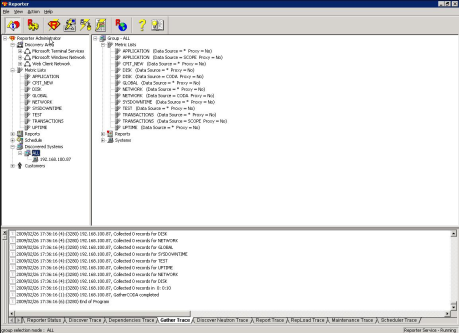 This is a summary of the configuration described in this section. The data resolution setting can be customized according to specific reporting needs, in which case one ETL task for each data resolution is to be set up.

There are three sections (tabs) in the ETL run configuration page where the behavior of "Moviri - HP Reporter Extractor" can be specified: 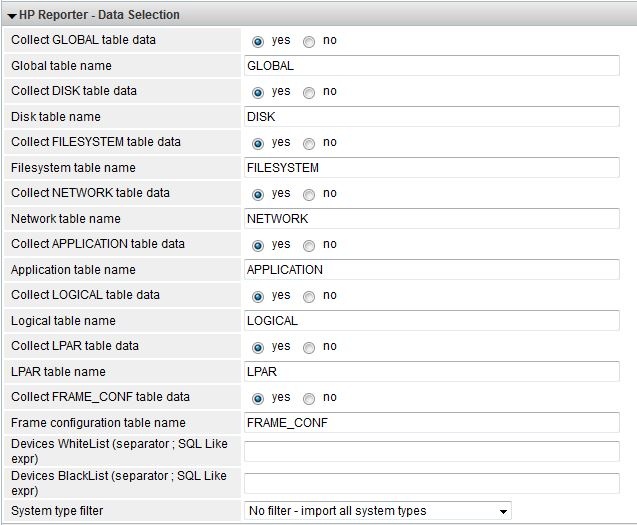 In order to perform a historical recovery of data, please use the default, "lastcounter"-based mechanism of CO, i.e. change the current value of the desired lastcounter.
If the ETL task is newly created and has no lastcounter defined, the "default lastcounter" can be used

For all metrics imported by the ETL and described in this section, the following apply:

Missing data can represent a frequent problem; in this case a WARNING status would be associated to the ETL task. This can be due to a number of scenarios, among which: 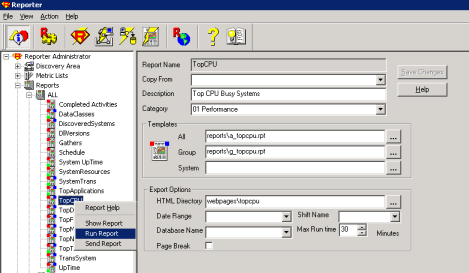 The lack of extracted data (see the following log example) indicates that new data might not be available in HP Reporter. In this case, the previous condition applies and the recommendation is to run the ETL at a later date.

Moreover, it is strongly recommended to avoid creating an Integration Studio ETL module with the same name as this ETL (HPReporterME), which would likely cause unexpected behavior.

The following configuration metrics are imported into CO:

Metrics with * were previously custom, remapped as standard after v 3.4.00

The ETL connects to the Reporter Warehouse instance and extracts data for metrics belonging to specific HP Reporter metrics’ classes. These classes of performance  metrics are populated by HP agents and refer to:

The full list of known classes and metrics, and the mapping between HP Reporter metrics and TrueSight Capacity Optimization metrics is reported in the listing below.

Inside all metric lists created in HP Reporter, it is important to include the INTERVAL and GLB_INTERVAL columns, wherever applicable.

Here below a lookup tables as example:

The ETL assigns all imported entities under a domain (which can be configured by the user).

A hierarchy rule associated to the ETL is automatically created by TrueSight Capacity Optimization to process the Object-Relationship data. 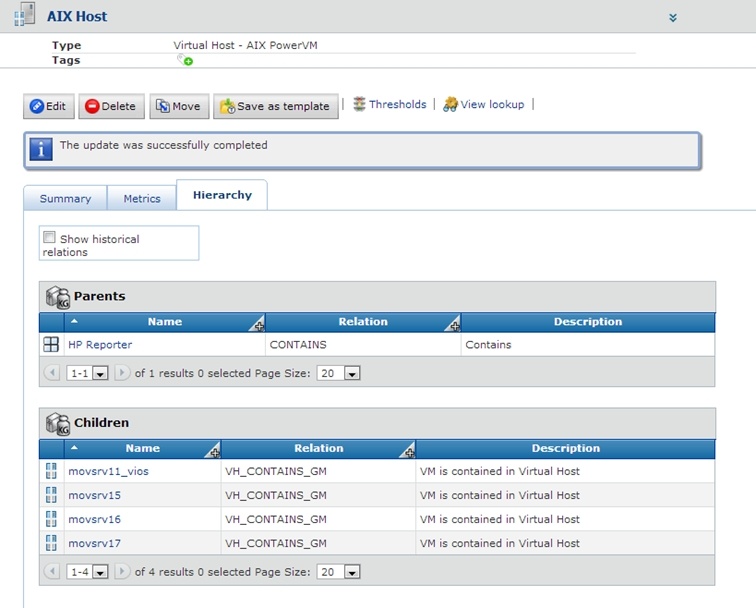 Was this page helpful? Yes No Submitting... Thank you
Last modified by Manisha Moon on Oct 08, 2018
reference integration etls moviri