This documentation supports the 19.08 version of Remedy and applies only to the on-premises deployment model.

Server groups are designed to work with Remedy Action Request System (AR System) in any type of supported environment that has more than one server, including large distributed setups that make use of hardware load balancers. The AR System server groups feature provides failover management for crucial operations, server scalability, application-level load balancing, and the sharing of floating licenses among the servers. A server group typically consists of two or more AR System servers that are managed separately. The servers share the same AR System database, but perform workflow and database updates independently from each other.

Benefits of using a server group

The following are the benefits of deploying Remedy AR System in a server group:

Server groups also work in conjunction with hardware load balancers that direct user traffic to some or all servers in the group. For best performance and reliability, BMC recommends that you use a load balancer when implementing server groups. For specific details on using a load balancer, see the following topics on the Remedy AR System online documentation:

See the following examples of a simple and a complex AR system server group configurations.

In the simplest form, a server group can be setup with two AR System servers and a database server. Each of the AR System servers have all Remedy products installed. In this example, the first server installed should be configured to be the primary administration server. Then, using the AR System Server Group Operation Ranking form, the applications should be distributed evenly across both servers (use the AR System Service Failover Ranking form for Email Engine and Normalization Engine). The distribution is done so that each server handles about half of the load, and each server has the other server configured for failover on each of its applications. The exception to this is the Email Engine and the Flashboards server. Email Engine is ranked as per configured mailboxes. To achieve failover and load balancing of your Email workload, you can configure the Email Engine to have multiple mailboxes that are ranked differently across the servers. In a simple configuration, the Email Engine and the Flashboards server are installed on every system but can be configured for only one server. Configuring failover for those operations can be complex and may not be necessary in a simple configuration. The full text search feature should be configured on each server. Each server has the ability to read from FTS, but only one of the servers that has a higher priority on the AR System Server Group Operation Ranking form can be set to write. It is also recommended that the FTS collection directory (location where the search index files are stored) and FTS configuration directory (location where the search configuration files are stored) be located on the same computer. 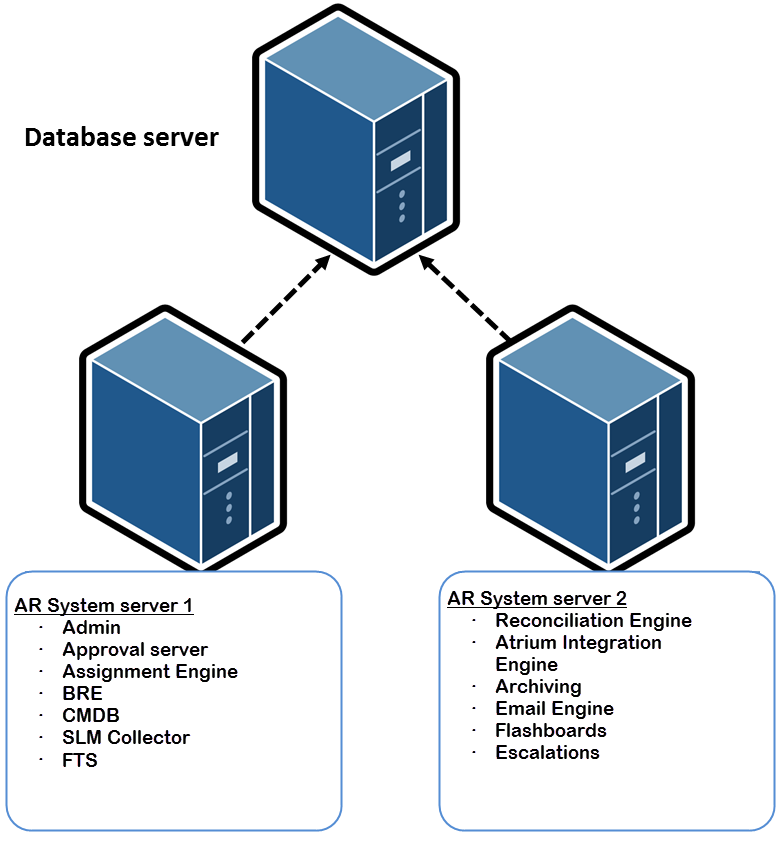 A more complex server group implementation contains three or more AR System servers. In this example we are using four AR System servers. The applications or components should be installed on more than one server in the group so that failover can be provided. Again, the first server installed should be configured to be the primary administration server. Then, using the AR System Server Group Operation Ranking form, the applications are distributed evenly across multiple servers, so that each server handles a portion of the load, and each server has at least one other server configured for failover on each of its applications and components. You can also set up two servers to handle the user facing operations, while the other two servers handle the backend operations. Separating the user-facing and backend operations to different servers help provide optimal performance to the users.In this case, even the Email Engine server and the Flashboards have a failover server assigned. Configuring failover for those operations is somewhat complex because it means that each server has to be specifically configured to handle those items, but the secondary server for each is suspended until the failover is activated. 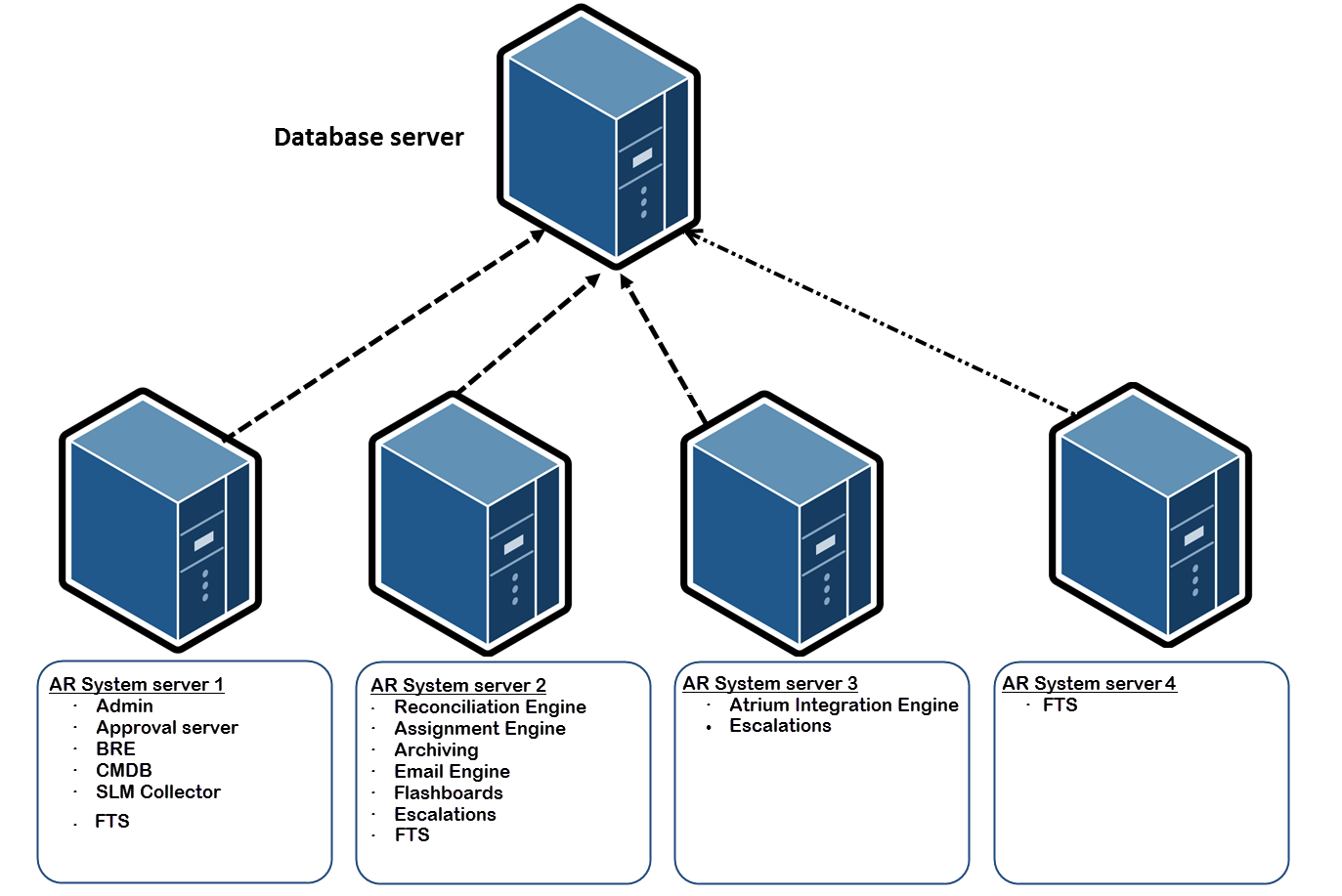 The applications and components listed for the servers above are just the primary roles for each server. It is recommended that all applications and components be installed on each server. This is important because users could be accessing any components from any server in the group, and there are dependencies such as plug-ins and other binary files that could be called when a user opens certain forms, creates a new record, or modifies a record.

FTS is installed on each server of the server group. You must rank and configure FTS in the designated servers as per your deployment strategy. If more than one server are ranked for FTS, then all the servers send their search requests to the server that is ranked 1 for FTS. If the rank 1 server becomes unavailable, then the FTS operations fail over to the next ranked FTS server. However, you can configure the servers to send their search requests to specific indexer to balance the search load. We recommend that the FTS collection directory (location where the search index files are stored) is present on the same server as the AR Systems server.

Planning where software is installed in a server group

When installing server groups, make sure you know exactly what products you plan to install, and determine which servers will be running each product. BMC recommends that you install all the Remedy products on all servers, and then to use the AR System Server Group Operation Ranking form to distribute the load. The Email Engine and Normalization Engine use the AR System Service Failover Ranking form. However, there are may different ways to do this and each decision is based on the specific implementation.

For using the IP-Name parameter to perform administrative operations, create a list in a text file for each server and its IP address, as well as all accepted fully qualified names. This saves you time when configuring the other servers. Each server that is ranked for Administration operation must have the same set of entries containing all resolvable names for each server in teh server group. Include the IP address, short name, and fully qualified name for each server in the server group and the load balancer, if one is used. In the installation instructions, a two-system server group is used and the systems have the following information. (Ensure to obtain similar information for your implementation before you start the installation process.)

The following example uses a format that you can use the Centralized Configuration form for all the servers in your server group. It includes the entire set of IP-Name entries for this example.

You must provide the following additional information: 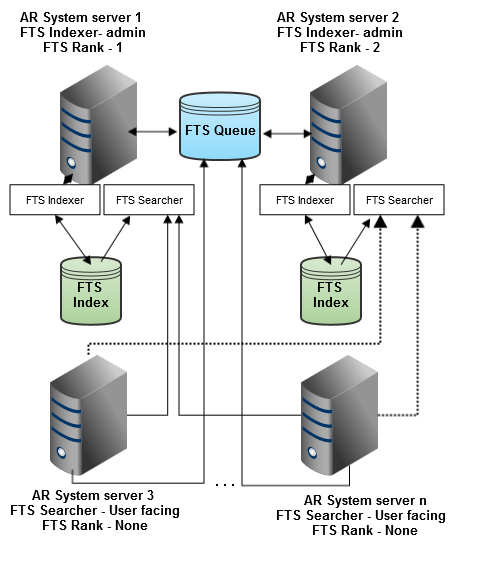 Was this page helpful? Yes No Submitting... Thank you
Last modified by Himanshu Raul on Jul 20, 2020
server_group_configurations server_group benefits arsystem_servergroups