A standard is a specially constructed Action that contains code that implements a set of compliance rules (also known as checks) and reports back to the BDA Manager whether the rules have been met by calling perl libraries embedded in the BDA agent. Because this can be a complex process, BMC provides a compliance library and runme/runme.bat executables (collectively known as the BDA Compliance Standard Framework) that can be included in a standard. This framework makes it easier to implement compliance rules by handling all the communication with BDA, so that the user only needs to perform the compliance check itself.

Standards written using this framework contain directories to separate the different pieces of the standard, XML files that describe the individual rules, and executables (such as a perl script or an operating system command) that perform the checks. For example, for BMC’s DISA standard for an Oracle 11g database, the standard contains two scripts (runme and perl/runme.pl) and several perl libraries (perl/libs/*) that implement the framework for running the checks, and a directory that stores all the compliance rules.

All special custom fields are processed by the perl/runme.pl file that is included in the BDA compliance standard framework.

Rules evaluate an object (for example, a database) against a pre-defined test. In standards that use the BDA compliance standard framework, each rule has a corresponding .xml file that describes what the rule does.

For example, a DISA standard for an Oracle 11g database might require 64 different checks to comply with that standard. The following example shows the format of the .xml file for one of those individual checks:

The following table details the description of tags the <check> block.

This detection method is one of two that provides the most flexibility in reporting the results of a check. It supports five different status codes:

For more information about status codes, see Viewing the results of a compliance standard.

This detection method also provides the most flexibility in reporting the results of a check, but it also allows you to author checks in any scripting or programming language.

Whichever language you use, the script must be executed from a command line on the target operating system:

By exiting with one of these numeric exit codes, the script can communicate the status of the check.  The reason for the check result can be communicated by the script by writing a summary.txt file in the directory indicated by the GA_LOG_DIR environment variable.

This detection method allows you to specify that a check must be performed manually and marked compliant in the BDA GUI. The value of the detect tag is returned as the reason for the result of the check, and the result returned for the check is MANUAL.

The SKEL directory is a sample directory containing three sample checks. The name of the directory is specified by the value of the SUITE custom field in the template. This custom variable is the only variable that is required to be in each template used by the BDA compliance standard framework. Wiithout it, the framework would not be able to determine in what directory the checks reside.

Each of the checks is specified by an XML file and a directory:

The names of the XML files and the names of the directories are the same. Although this is not required, it is a best practice for tracking purposes.

The following example shows the XML for the first check:

Note that the contents of the <id> tag of the check is the same as the name of the directory for the check. This is how the BDA compliance standard framework determines what directory to pull files from when executing the check.

The <name> and <description> of the check are strings to identify the check, and the <recommendation> is the string that is displayed to the user if the check fails. The crucial part of this file is the <detect> tag.  It specifies the name of a file in the check_01 directory that will be executed to perform the check, and the method attribute tells the framework that this file is a perl script, shown in the following example:

This script starts using strict and warnings (which is always a best practice when writing perl scripts) and then uses the ComplianceUtils module of the BDA compliance standard framework. Next, it calls the pass_compliance() subroutine exported by that module.

The second check works in much the same way:

The following example shows how the third check performs:

This third check looks for a custom parameter called LIST_OF_EXISTING_FILES that should contain a comma-separated list of files to look for. It uses the ComplianceUtils' parameter_to_list() function to convert the comma-separated list into an array.  If there are no files in the array, the rule calls die() to exit abnormally (this will fail the check). It then runs through the array and checks to see if each of the files exists. If any of them do not exist, the rule calls fail_compliance() to fail the check. If it finds all the files in the array, and it calls pass_compliance() to mark the check as passed.

Lines 4-9 define the SUITE custom field that tells the BDA compliance standard framework where to look for the rules, and then lines 21-25 define a LIST_OF_EXISTING_FILES parameter that has a default value and be presented in a textarea. The parameter defined in lines 12-19 are a read-only parameter (note that <editable> is set to false on line 18) that is used to describe to the user what the LIST_OF_EXISTING_FILES parameter is used for. Having a description for each parameter is not a requirement, but it is a best practice.

The SKEL directory can be renamed along with the value of the SUITE custom field in the template to be more appropriate for the standard you are trying to create.  Each individual check will need an XML file and directory within the SKEL directory (or whatever you change SKEL to) where the names of the directories match the values of the <id> tags in the XML files. And executable scripts (either perl scripts or shell/batch scripts) that are specified in the XML file will need to be in the directory for each check. Do not change the runme, runme.bat or the contents of the perl directory.

The best way to upload all the files with the proper directories is to package all the files into a zip archive. Make sure that your archive doesn't contain a directory between the top level and your files. The runme, runme.bat, perl, templates, and your check directory should all be at the top level of the archive, as illustrated in the following screen: 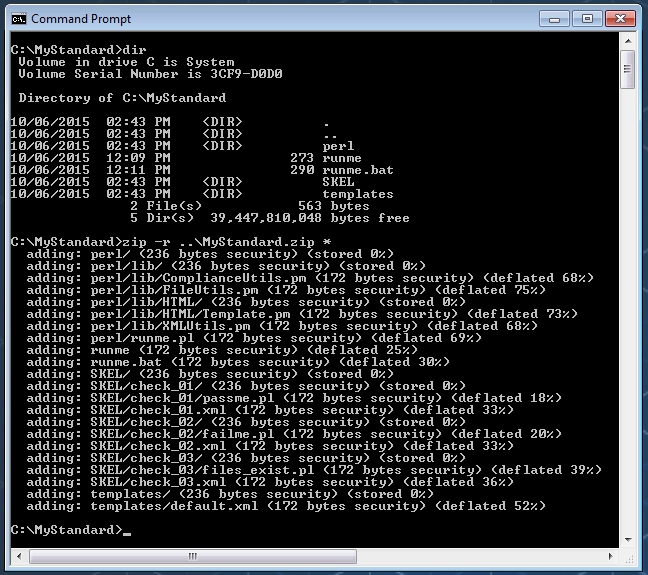 When you create the standard in the BDA GUI, you can upload this zip file to load all the files into the correct place.

BDA does not allow you to specify all templates using an uploaded zip file. When creating your standard, you must upload one of the template XML files individually.

Customizing a Standard Developed by BMC

Was this page helpful? Yes No Submitting... Thank you
Last modified by Winner kumar Jaiswal on Dec 20, 2018
compliance