The device topology is an automatically created hierarchy that represents the way servers and clients are logically linked together, that is, the cascaded architecture of BMC Client Management itself.

The Autodiscovery feature of BMC Client Management maintains the topology of your network up-to-date. 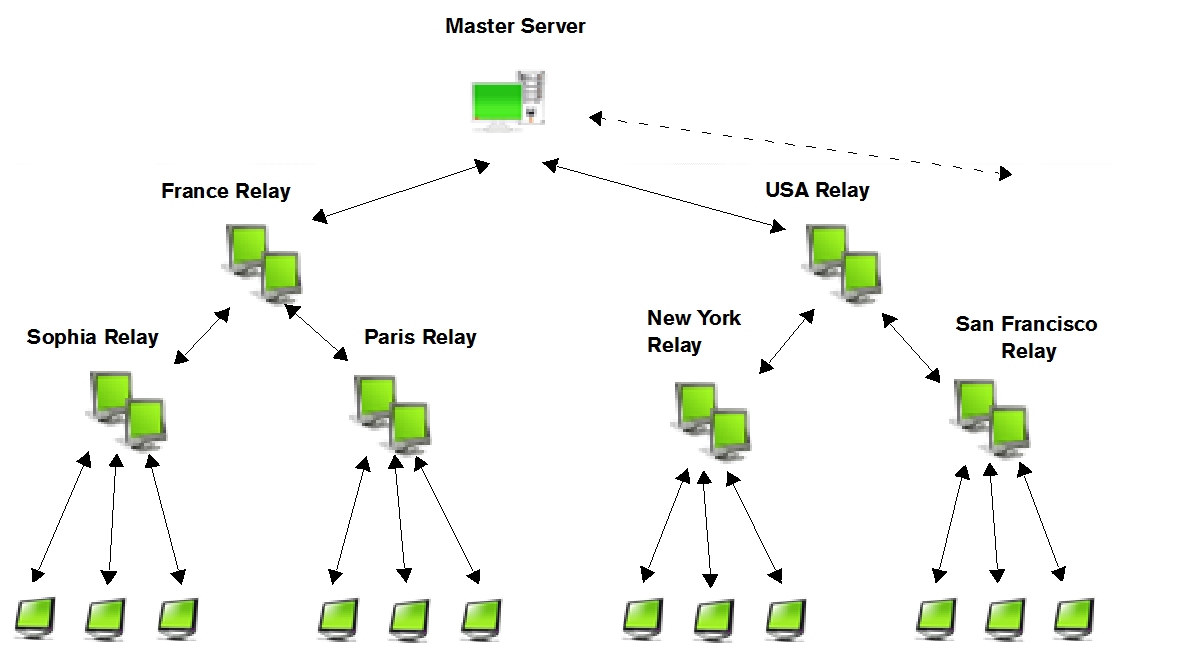 All agents communicate with each other via a XML/RPC connection, which means that contrary to the classical architecture there is no permanent connection between the agents. Furthermore there are no typical modules such as servers and clients. Each agent can execute both roles, depending on the current requirements, therefore the resulting architecture is more of a Peer-To-Peer type. The queries are structured like XML and they are transferred via the HTTP protocol, which assures standard communication.

A key concept of BMC Client Management is that although the master server needs to know how to reach a client system, this is not set in stone and can dynamically evolve, if, for example, a client moves from one relay to another. This is especially useful for mobile systems that often move from one site to another and therefore need to be managed from a different relay server.

A basic rule of the cascaded architecture is that a client is located under only one relay and a relay can only be under one other relay of the master server, thus ensuring that no device has more than one parent. The Autodiscovery module of BMC Client Management allows for constant updates of the topology of your network.

The autodiscovery modules of the agents can exchange their lists at regular intervals, which maintains the network load and the load of the local CPU at a very low level. Effectively, all discovered addresses and their corresponding information are transferred between the modules, avoiding unnecessary PINGs or HTTP requests. Each list manages the difference between an address of which it has the control of and all others addresses, which were created via the interrogation of another list.

The Relay module does not only exist on relays (intermediary servers) but also on all BMC Client Management agents. This module manages the Automatic Relay Selection function, which searches, depending on its settings, the relay which was chosen for the local agent. This is executed according to the information stored in the autodiscovery list, specifically through the RouterHopCount parameter which measures the distance between the client and its relay and the speed with which it answers.

Each BMC Client Management system be it a master, relay or a client, within a range of IP addresses has the ability

Whenever a client system notices that it has changed location, it is responsible for informing its closest parent of this change (Automatic Selection option of the relay must be set to Yes) and so on until the master is notified and updates its topology database.

Was this page helpful? Yes No Submitting... Thank you
Last modified by Rohit Parmar on May 20, 2016