Mid Tier translates client requests, interprets responses from the server, handles web service requests, and runs server-side processes that bring AR System functionality to web and wireless clients. A browser is a generic client that has no inherent knowledge of any application that might run within it. By acting as an interpreter, the mid tier allows a browser to become a fully functional AR System client.

While accessing the applications using Mid Tier, you can open multiple browser windows using workflows. All the forms opened with the workflows are closed after you log out. But if you make any changes to the open forms (for example, change the URL in web address bar or refresh the page or access any other forms by typing form name) or if a new browser window or tab is opened and other forms are accessed. Mid Tier does not close such windows, but a session timeout error is displayed if you perform any operations on them.

For a list of supported engines, see  Compatibility matrix  in the BMC Helix Innovation Suite Deployment online documentation. Apache Tomcat is bundled with the Mid Tier and is installed by default.

The web server manages the transfer of all HTML content to the browser. Infrastructure components, such as servlets and other services (special Java classes), translate client requests and interpret responses from the AR System server.

The main components of the Mid Tier infrastructure are:

The strategy for processing and serving browser-client requests is based on several components. These components work together to take input from the client and compute a response that the user sees in the browser as dynamic HTML (DHTML). These Mid Tier components do not run in a separate proprietary process, but in the JSP engine using standard web protocols.

The use of JSP servlets makes the mid tier scalable in the following ways:

Additionally, the architecture supports server clusters, or web farms that are hardware setups in which several physical web servers share the load directed to one logical server (one IP address). In a web farm, a load balancer receives requests and sends them to whichever physical server has the most resources available to handle them.

The Hub and Spoke implementation displays a consolidated list of tickets from a central console for a support staffer. This architecture efficiently maintains data integrity and country boundary rules.

Without requiring authentication, the central system displays the remote transactional data in a new Mid Tier window on a workstation connected to the central AR System server. The support staffer can open the record from the remote server, view the record's details, and work the record through its lifecycle.

Scenario for launching a browser on another Mid Tier

For information about configuring this feature with an AR System, see Configuring a mid tier to launch a browser in a different mid tier.

For information about configuring this feature within a BMC Helix ITSM: Asset Management hub and spoke system, see Registering hub and spoke servers .

Mid Tier is capable of rendering a progressive web application (PWA) for a custom application. The following image represents the architecture of Mid Tier that involves a cross-launch from Smart IT. 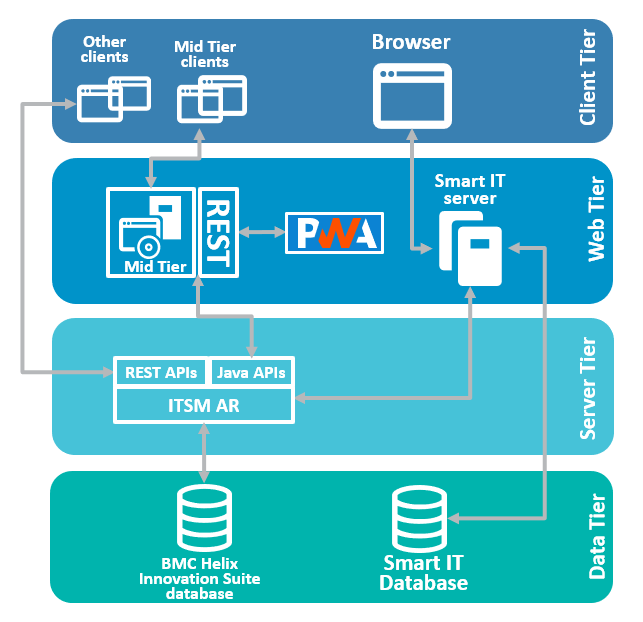 As part of the new architecture, the Mid Tier backend is used to leverage its generic and AR System metadata-driven implementation, and the client-side rendering logic is changed to produce a user interface and experience that is similar to that of Smart IT.

How PWA screens are viewed from Smart IT

End users can open the following PWA screens from Smart IT:

You can enable opening of these PWA screens from Smart IT by using the cross-launch settings configured in the Centralized Configuration. The following diagram illustrates how PWA screens are viewed from Smart IT: 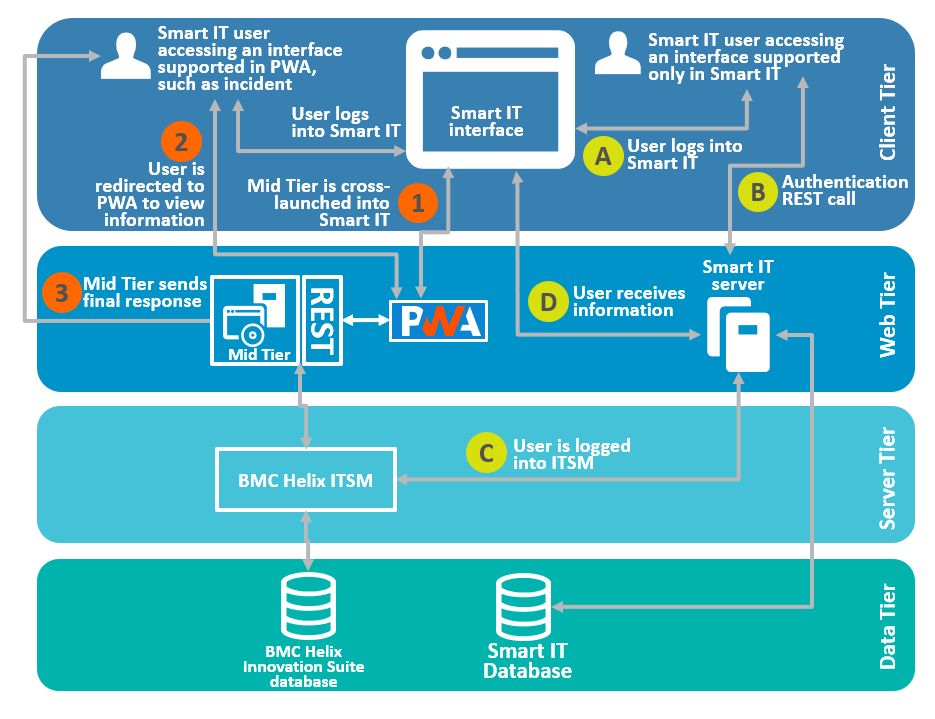 When a screen is available in PWA, Mid Tier screens are displayed from Smart IT as described in the following steps, which illustrate the example of when a Smart IT user views an incident ticket.

The following list shows the information flow when a Smart IT user accesses a screen that is available only in Smart IT:

A. The request to view a screen is sent to the Smart IT server because the interface is not available as PWA.

B. An authentication REST API call is sent to the Smart IT server.

C. A user is logged in to BMC Helix ITSM.

D. BMC Helix ITSM displays the information to the user.

To learn more about enabling Progressive Views, see Enabling the Progressive Web Application screens in the Smart IT documentation.
Was this page helpful? Yes No Submitting... Thank you
Last modified by Anagha Deshpande on Jul 28, 2021
components mid_tier architectures videos