The following figure depicts the infrastructure of the AR System server.

The main components of the AR System server architecture are as follows:

The following figure depicts the high-level design of the AR System server. 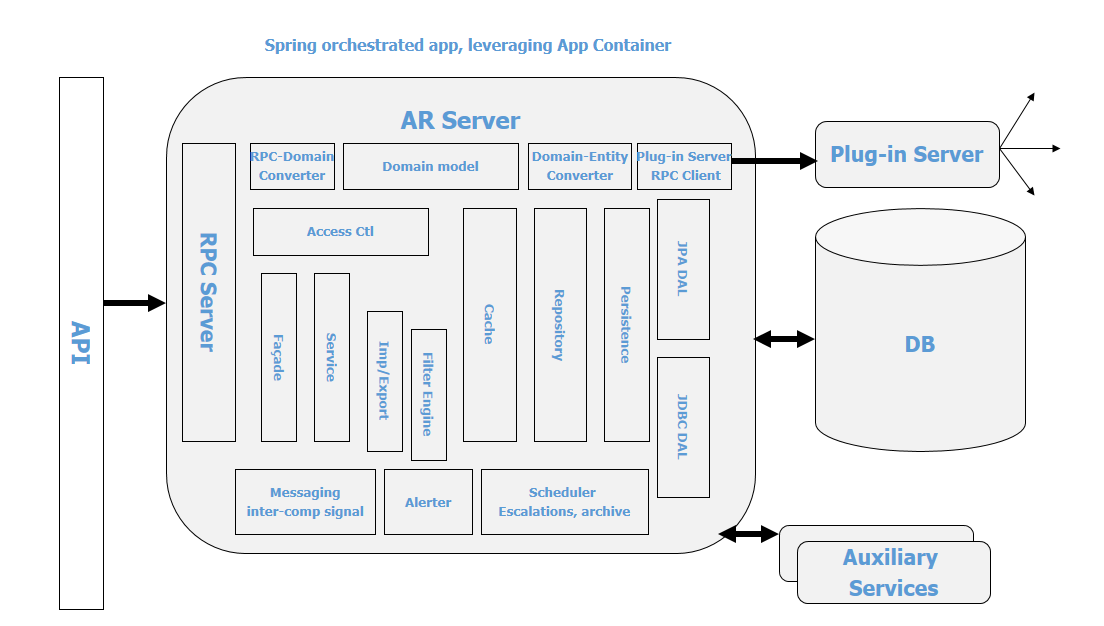 AR System is built to handle high loads and a large user base. It supports clustered configurations with multiple AR System server instances serving a single user base, as well as a distributed architecture where you can set up independent or groups of clustered servers in separate locations.

Following are highlights of the AR System server:

AR System server is implemented with the following layers:

A queue is a meeting point where remote procedure calls (RPCs) wait to be handled by the worker threads that process the RPCs. When a queue is created, it automatically starts the minimum number of threads specified for its thread type. The default for this setting is 1.

The following table lists the types of AR System queues. Each queue has an RPC program number associated with it.

The term thread is short for thread of execution. Threads enable the server to process concurrent client requests. Each thread within the multithreaded server can carry out a client request before returning to the queue to process the next one. Start only as many threads as your database and system resources can reasonably support. The total number of threads cannot exceed the number of database connections available to the AR System server.

All threads within a process share network and system resources; therefore, consider carefully the available resources of your system and network when establishing the minimum and maximum thread settings for your server queues.

Every call that the dispatcher thread receives is assigned an RPC ID that can be used to identify the call from the time the call is placed into a queue until a response is sent to the client.

In general, the dispatcher thread uses the following logic to dispatch calls:

On startup, each thread creates a connection to the database that it uses throughout its existence. If the thread cannot establish a connection, it terminates itself, notifying the queue that no more threads are to be started. The database connection is dedicated to the thread, even when that thread is not busy.

Any available worker thread can remove the request from the queue, read the request, process it, and return results to the client before returning to the queue to respond to another request. When a request is placed in a queue and no existing threads are available to handle it, a new thread is started until the queue reaches the maximum number of threads allowed for its thread type.

The thread manager is responsible for ensuring that a thread is restarted if it dies. A major benefit of a multithreaded server is not having fast operations held up behind a slow list operation.

Deciding how many fast and list threads you need depends on your particular setup and situation. For example, not specifying enough list threads might mean you have idle fast threads but an overloaded list queue.

Another consideration is that list threads require more memory than fast threads. For example, a complicated query might require a great deal of memory at a given moment. A few of these large queries can temporarily exhaust your system resources.

Do not specify an artificially high number of maximum threads because the threads would consume resources that other threads need. To set the number of minimum and maximum threads, see Setting ports and RPC numbers.

The AR System server is a set of processes that run on an application's server host. The server is available for these operating systems:

For the most accurate information about supported platforms and software, see  Compatibility matrix  in the BMC Helix Innovation Suite Deployment online documentation.

The server is implemented as several service processes that are normally started automatically when the server host is turned on.

The AR System server processes all data entered through a client. As the workflow engine between client and database, the server writes data to the database when a request is created and retrieves data from the database when a client requests it. The server verifies that a user has permission to perform each transaction, thereby enforcing any access control defined in an application. The server also continuously evaluates the data in the database and each transaction to determine whether the server should perform workflow. The server might also perform workflow on a timed basis.

When a client submits a request to the server, the request enters through the API, goes through access control and data validation, and filter processing. Then, transactions are committed to the data repository as appropriate.

Following are the key processes in the AR System server:

Was this page helpful? Yes No Submitting... Thank you
Last modified by Anagha Deshpande on Sep 16, 2021
databases ar_system_server architectures web_servers