AR System is based on a client/server architecture. The following figure depicts the relationship among the components that reside within each of the functional environments of the AR System architecture. Notice that no definitive starting and ending point separates the environments because their functions sometimes overlap. 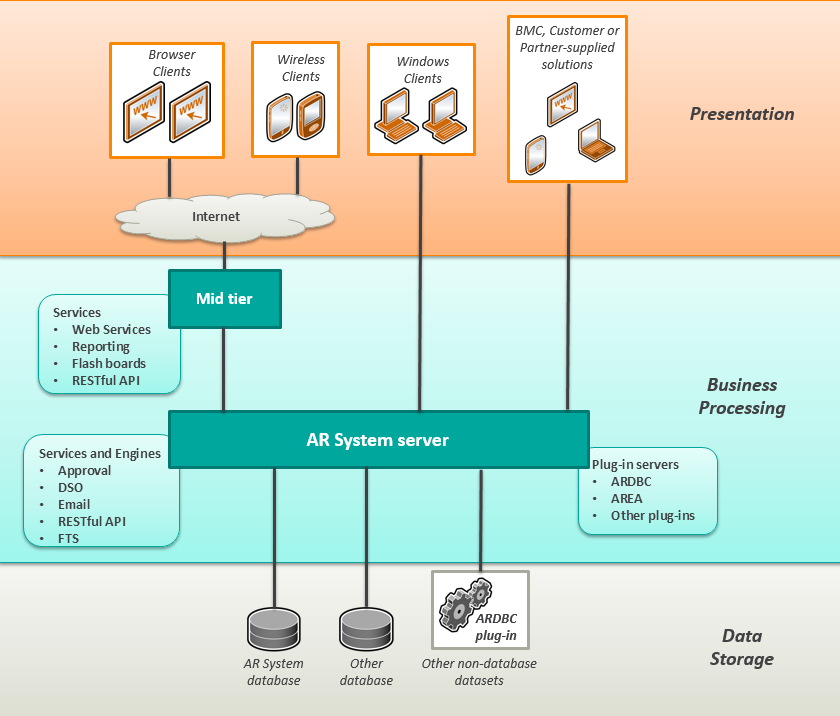 Within these functional environments, several system components work together to provide power, flexibility, and scalability.

To provide scalability and increase reliability, you can connect a group of Approval Server to the same database and manage them as a unit by configuring a server group. Server groups act as a single server to support the applications that they run. Servers in the server group can be configured to spread the load of shared services, and they can provide backup to each other to ensure that those services are always available.

The following figure depicts the high-level architecture of the AR System. 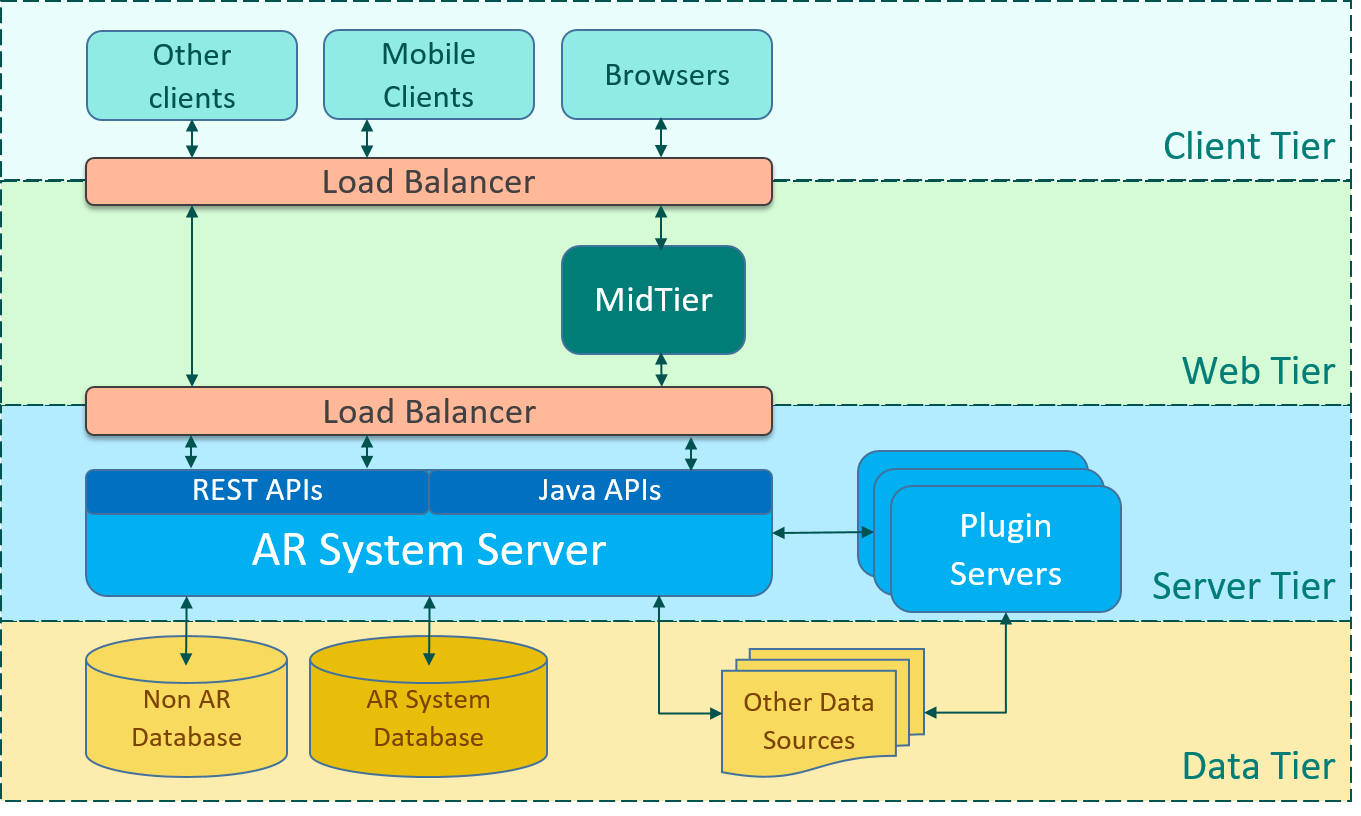 Use Distributed Server Option to build large-scale, distributed environments that behave like a single virtual system. DSO enables you to share common information among servers and keep that information consistent. For example, as illustrated in the following figure, you can transfer copies of a request to other servers and ensure that any changes made to the copies are also made to the original request. The way that you define the processes for transferring information is similar to the way that you define business processes for an application. First, managers at each site must agree on what information to transfer from one application to another, what conditions drive transfers, and which sites control the ability to update a record. An administrator at each site then uses DSO to implement these decisions.

AR System  in a distributed environment

Because the multiple layers of AR System are independent of one another, you can combine operating system platforms to fulfill different functions. The heterogeneous environment enables you to mix and match client and server platforms. For example:

AR System is based on a multitiered client/server architecture that includes the client tier, the Mid Tier, the server tier, and the data tier. The following figure shows the various tiers of the AR System.

AR System clients provide the user interface. The Mid Tier makes the user interface available in browsers. The AR System server implements the workflow functions, access control, and flow of data into and out of the database. The database server acts as a data storage and retrieval engine. 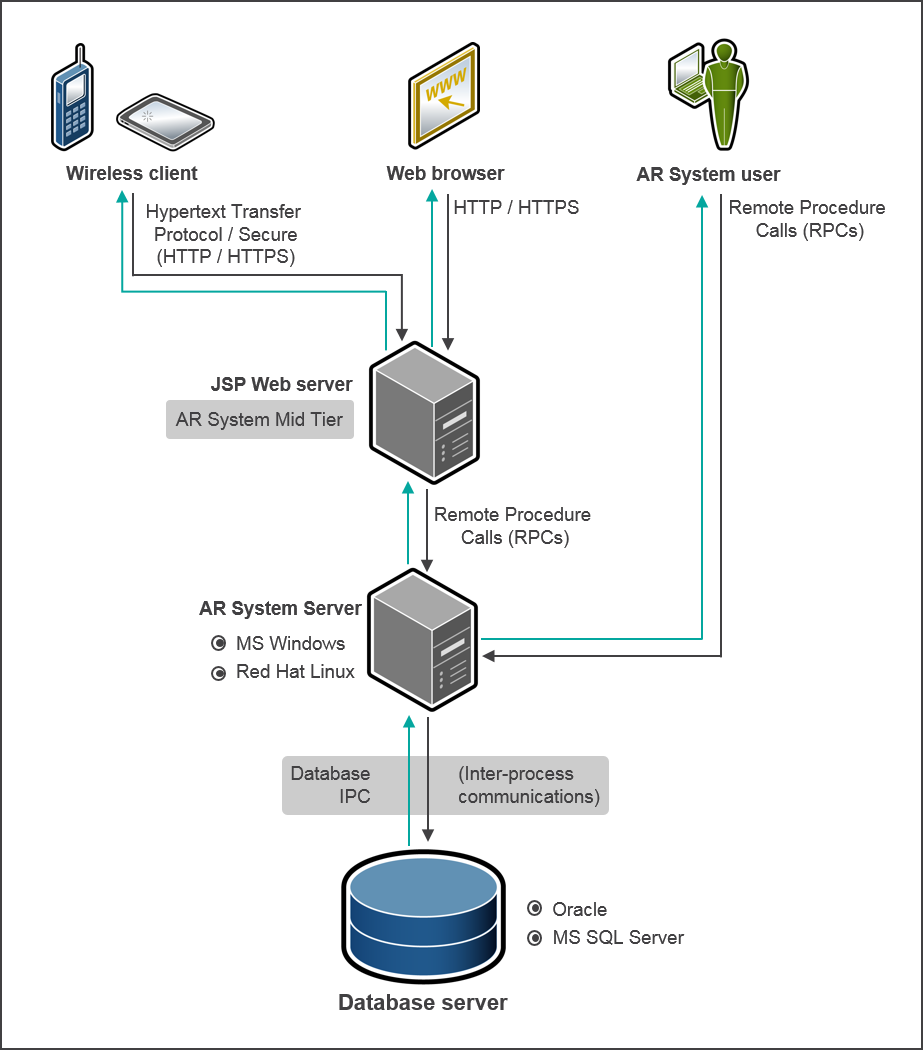 This section explains how AR System components communicate with each other.

Communications between clients and the AR System server

All clients of the AR System server communicate with the server by using remote procedure calls (RPCs) on top of a TCP/IP transport stack. The type of RPC is the Oracle ONC RPC. TCP/IP networks are the de facto standard for corporate and Internet communications. The RPC mechanism is used because it is a "lightweight" transport that uses minimal network bandwidth, yet provides robust communications services. It can function over slower dial-up network links and high-speed internet and intranets, and is supported over most of the wireless networking technologies. The AR System web server communicates with the browsers using Hypertext Transfer Protocol (HTTP) or Secure HTTP (HTTPS).

AR System clients can be broadly divided into user client and developer clients.

Through the Mid Tier, users can access AR System in a browser.

From the browser, administrators can:

The developer clients are used to create, modify, and extend AR System applications.

BMC and its partners also offer the following tools for expanding the capabilities of core AR System. These tools act as clients of AR System.

See Publishing the AR System functionality as a web service and Integrating AR System forms with a third-party application by using the REST API.

Support for an external database

AR System can also work with data stored in external databases and other data sources that AR System does not manage. AR System accesses these data sources through view forms. In addition, AR System can use AR System database connectivity (ARDBC) to work with data not stored in databases as if the data was locally owned. In other words, ARDBC plug-ins can be created and configured to enable access to data stored outside the database as if it were in tables owned by AR System.

AR System workflow components can search for records (requests) in the AR System database and act on the results of the search. Clients can use the following types of searches:

An administrator can create and store searches that users commonly perform. A user can define personal searches for forms to which the user has access.

Support for high availability and failover