The initial goals of viewing AR System Log Analyzer output are to:

Before viewing the AR System Log Analyzer output, ensure that you have performed the following tasks:

An administrator is investigating a performance issue when synchronizing from BMC Atrium Discovery and Dependency Mapping to BMC Atrium CMDB. After capturing the issue in logs, running arpreparelogs, and running AR System Log Analyzer, the administrator opens the output file to view the general statistics. The statistics show the log captured 20 minutes of activity, only 5 users were using the system, and 3 API exceptions. This is the expected behavior. 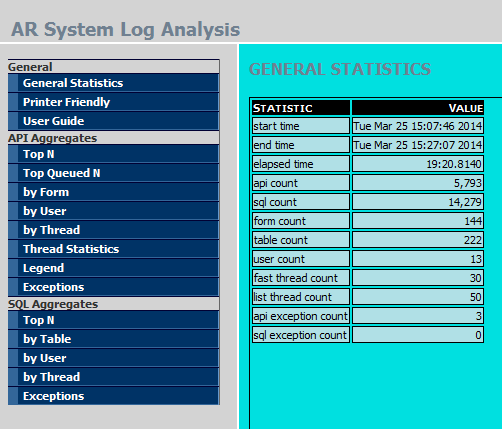 Then, under API Aggregates, the administrator clicks Top N to see the longest running API operations: 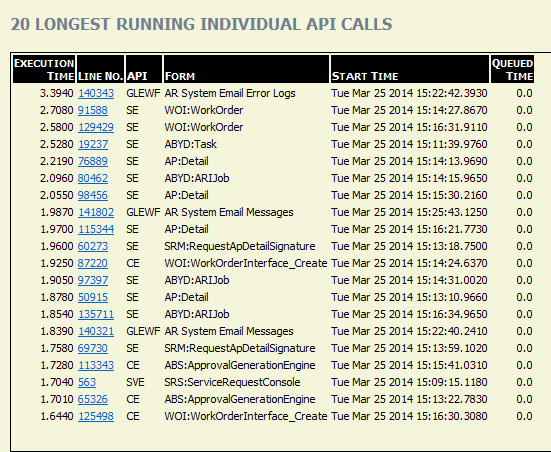 Execution Time values show API calls longer than 18 seconds and as little as 1.2 seconds. This is a large range for Execution Time, investigating why some operations took 18 seconds is worthwhile.

The values of Start Time of these API calls are within one second of each other, so the administrator decides to look at these operations closer to investigate whether some event on the AR System server or at the database server are in contention, or whether the same API call processes more quickly at other times.

The administrator decides to investigate these slow API operations to determine the cause and whether they are responsible for the reported performance issue.

Was this page helpful? Yes No Submitting... Thank you
Last modified by Anagha Deshpande on Aug 02, 2018
troubleshooting logs analyzer