Roles are defined for each deployable application and then mapped to explicit groups on the server. You can map a deployable application's roles to different groups on different servers, depending on how the groups are defined on each server. This allows you to develop and test the application on one server and deploy it to a number of other servers without having to redefine permissions on each server. You can also map roles to different groups for each development state, such as Test or Production. You can then switch between states using BMC Remedy Developer Studio or workflow.

Because roles are mapped to groups, the groups you define on the server and the users that belong to them are the foundation of access control.

You must log on as an Administrator to work with the Roles form.

You can map roles to regular or computed groups for the Test and Production application development states. You can also create custom states and map roles for those states. To enable a particular mapping, change the application's state. For more information, see Working with deployable application states. 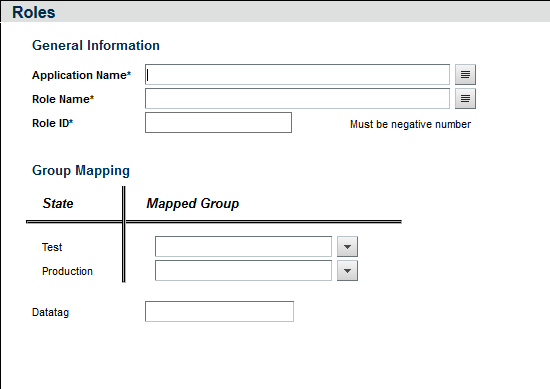 The following table lists the key fields in the Roles form.

Key fields in the Roles form

To create and map roles

To modify roles and role mappings