Thread statistics show how activity is spread across threads on the AR System server. Analyzing thread statistics can be useful in understanding the load distribution of threads during heavy activity. It is not as useful when looking at a development server or investigating a particular operation that is slower than expected.

Before analyzing thread statistics, ensure that you have performed the following tasks:

Under API Aggregates, the administrator clicks Top N and reviews the longest-running individual API calls. All of the API calls take less than 2 seconds.

The administrator clicks Thread Statistics and sees the following output: 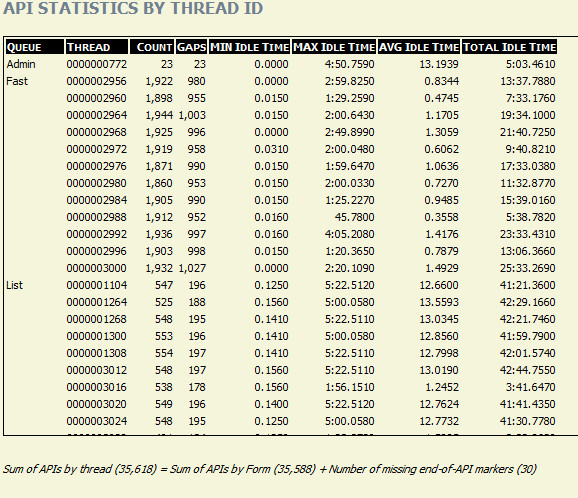 The Avg Idle Time for the Admin thread is large, but this is expected because there are no administrative operations on the server during the test period.

The Avg Idle Time for fast threads is small, and the fast API operations are well distributed across the fast threads.

The list threads show a large Avg Idle Time. However, the number of API calls that the list threads process is also much lower than that for the Fast threads. This indicates that during the test period captured in the logs, the activity consisted primarily of submit and modify operations (and fewer query operations). Further testing with a typical user workload might be required to identify whether too many list threads are defined.

After verifying that the BMC Remedy AR System threads are configured according to the guidelines, the administrator decides there is no need to adjust the thread queues defined.

Was this page helpful? Yes No Submitting... Thank you
Last modified by Anagha Deshpande on Aug 02, 2018
troubleshooting performance threads