This topic provides the following information about overlays:

An overlay is a copy of a BMC Remedy AR System server structure or workflow object that is used in place of the origin object.

The following figure shows how unmodified objects, overlays, and custom objects are used in place of the original objects for a customized application. 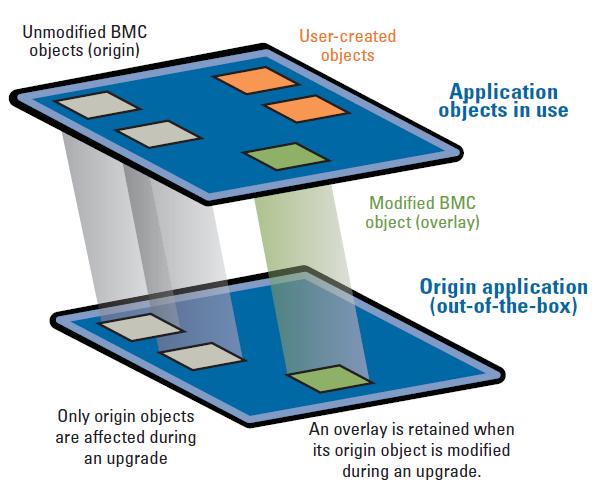 Overlays are separated into granular components, which allow you to add to or overwrite some aspects of an object and inherit other aspects.

When aspects are inherited, changes made to the origin object are also inherited in the overlay. For example, when you upgrade, any inherited aspects that are updated in the new version of the product are also updated in your overlay.

Where aspects are added (such as forms added to a filter, or permissions added to a form), the changes made to the origin object are also inherited in the overlay.

Granular overlays help to minimize reconciliation of overlays after you apply patches or upgrades.

Was this page helpful? Yes No Submitting... Thank you
Last modified by Anagha Deshpande on Aug 02, 2018

About origin objects and custom objects
Behavior of overlays