When values are greater than 4000 characters, in-row and out-row storage space usage is equivalent. However, response time performance might be better when the in-row option is used.

The BMC Incident Management application contains a few character large object (CLOB) fields. One such visible field is the detailed description field in the Incident form. A small load test of 60 users was run with each user creating an incident ticket repeatedly for one half hour. The average mid-tier response time was recorded when the database was configured for out‑row and in-row storage. The following table shows that the mid tier performs better with the in‑row option, whether the number of characters is greater than or less than 4000.

Additional tests with the BMC Service Request Management application show that using the in-row option significantly improves performance. A test of 400 users executing various actions for an hour was run, and the average mid-tier response time was recorded when the database was using out-row and in-row options. The following figure shows that the in-row option improves response time by at least 50%. The search keyword, the create service request, and the add work information actions all touch the CLOB fields. 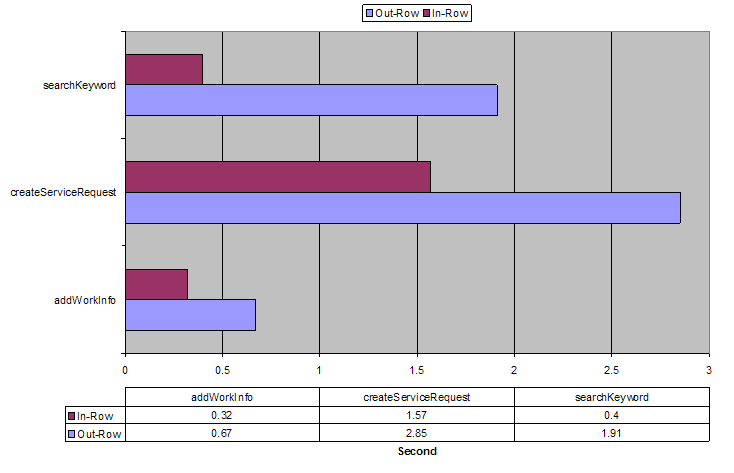 When a BMC Remedy AR System entry is requested, all column values are obtained, including 0‑length fields. Because of this, performance can be slightly faster when the in-row option is used because values that have fewer than 4000 characters are stored in the row.

Was this page helpful? Yes No Submitting... Thank you
Last modified by Jyoti Nerkar on Apr 11, 2018
performance storage options