Configuring DSO for a server group

The BMC Remedy Distributed Server Option (DSO) is used to build large-scale, distributed environments that behave like a single virtual system. DSO enables an organization to share common information among geographically distributed servers and to keep that information consistent. DSO enables you to transfer requests between servers and to keep copies of a request synchronized across multiple servers, even if those servers are geographically dispersed.

In a BMC Remedy AR System environment with load balancing or multiple servers, a DSO server process runs on each server, but only one process actively distributes data. The configuration needed to support DSO fail-over is limited to modification of the distributed mappings to indicate that any server in the server group can act as the source server.

To configure DSO for load balancing, you must configure multiple servers to use a single database (in addition to configuring the hardware load balancer). To do this, a server group is used. In a server group, you can use DSO to provide automatic fail-over capability for transfer operations typically restricted to one server. You do this by creating a distributed mapping and then specifying that transfers can be initiated from any server in the group. See Creating distributed mappings.

For example, as illustrated in the following figure, you can transfer copies of a request to other servers and ensure that any changes made to the copies are also made to the original request. The way that you define the processes for transferring information is similar to the way that you define business processes for an application. First, managers at each site must agree on what information to transfer from one application to another, what conditions drive transfers, and which sites control the ability to update a record. An administrator at each site then uses DSO to implement these decisions. 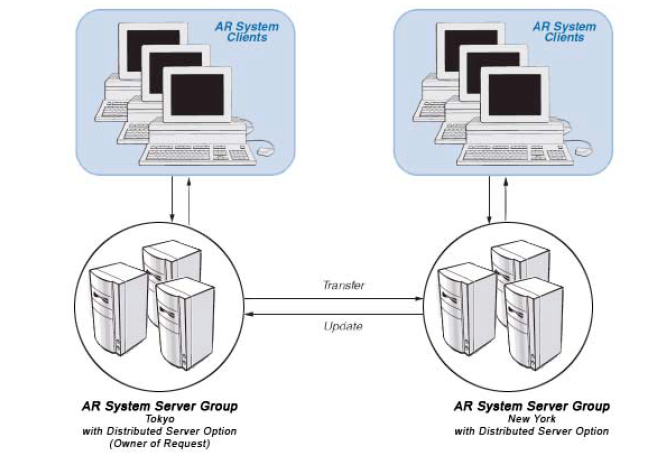 To configure DSO for a server group

Was this page helpful? Yes No Submitting... Thank you
Last modified by Jyoti Nerkar on Apr 11, 2018
configuration server_groups dso