This section provides information about modeling installed software and running instances of software and applications.

Representing CIs and their relationships in the Common Data Model

Each unique software or application installed on the server, workstation, laptop or desktop is modeled as a distinct BMC_Product Configuration Item (CI) instance.

We recommend that patches should be federated rather than imported into the CMDB, even though patches can be modeled by using the BMC_Patch class.

The following diagram shows three BMC_Product Configuration Item (CI) instances that are connected to the computer system through the BMC_HostedSystemComponent relationship with Name=INSTALLEDSOFTWARE. 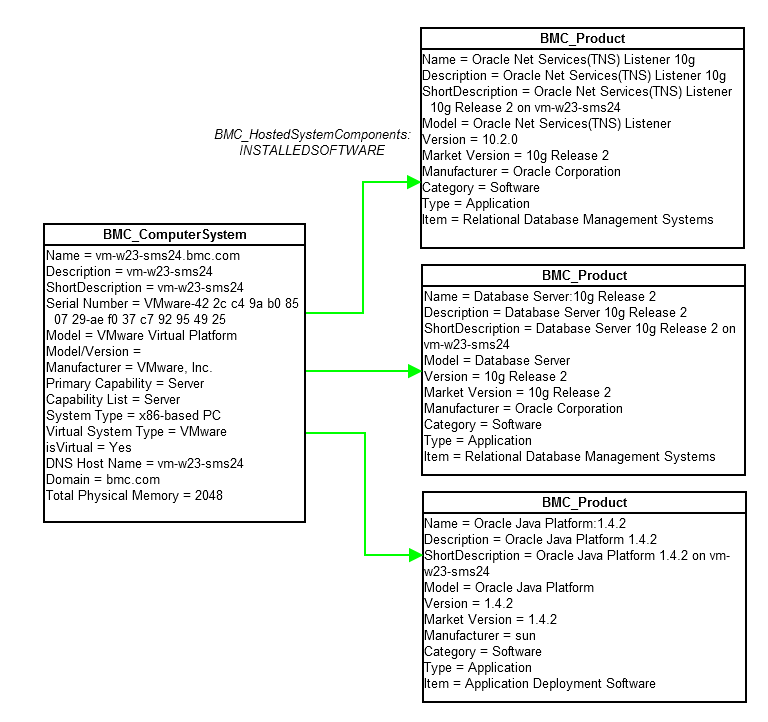 The following diagram shows a second server that has the same three products installed on it. For example, even though Oracle Java Platform is installed on both servers, and both servers have the same version installed (1.4.2), each installation is modeled as an independent CI.

Installed software is modeled in this manner due to incident, change, license management, and impact use cases. For example, a change record should be directly related to the precise CI being changed. If there were a single shared CI representing instances of the same software on multiple computer systems, then change and impact modelling would not show appropriate results. Licensing use cases also count the number of product CIs in the infrastructure and require that each be modeled distinctly. 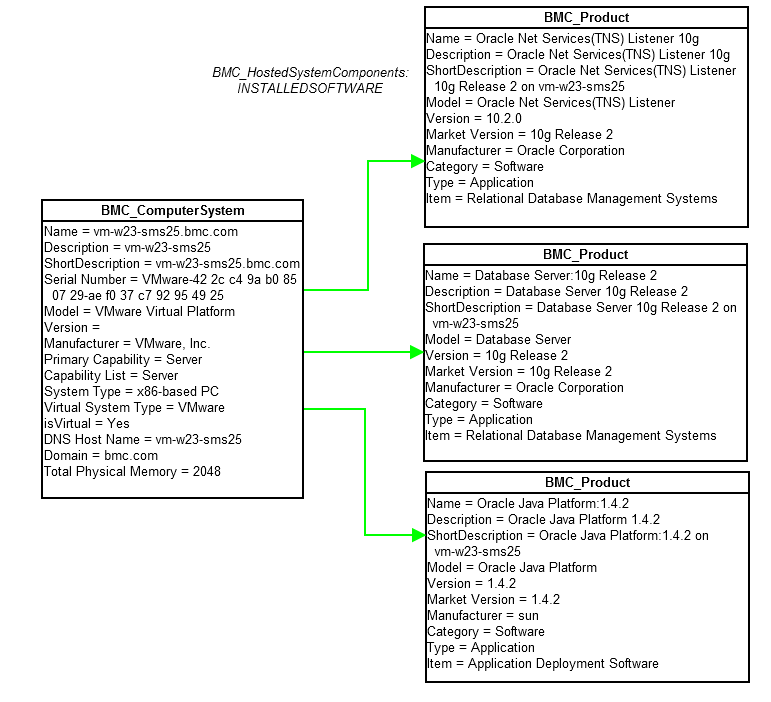 In some cases, there may be two versions of the same product installed on a computer. Each of the product versions are distinct CI instances which can differ by market version, version number, or both. The different instances are differentiated by the MarketVersion and VersionNumber attributes.

The BMC_SoftwareServer class represents the run-time aspects of installed software and applications. Instances of this class represent running software programs on the server. Typically, long running applications on servers such as webservers, J2EE servers, database servers, and daemons are all modeled using this class. One installed product CI (BMC_Product) can be related to multiple software server CI instances (BMC_SoftwareServer), representing multiple running instances of the same software.

A software server is a running instance of an installed product. For example, the following diagram shows a Microsoft IIS Webserver running on a computer. This is represented with two CIs with the appropriate relationship:

For software servers that are running as a part of a software cluster, see Software and hardware cluster models. 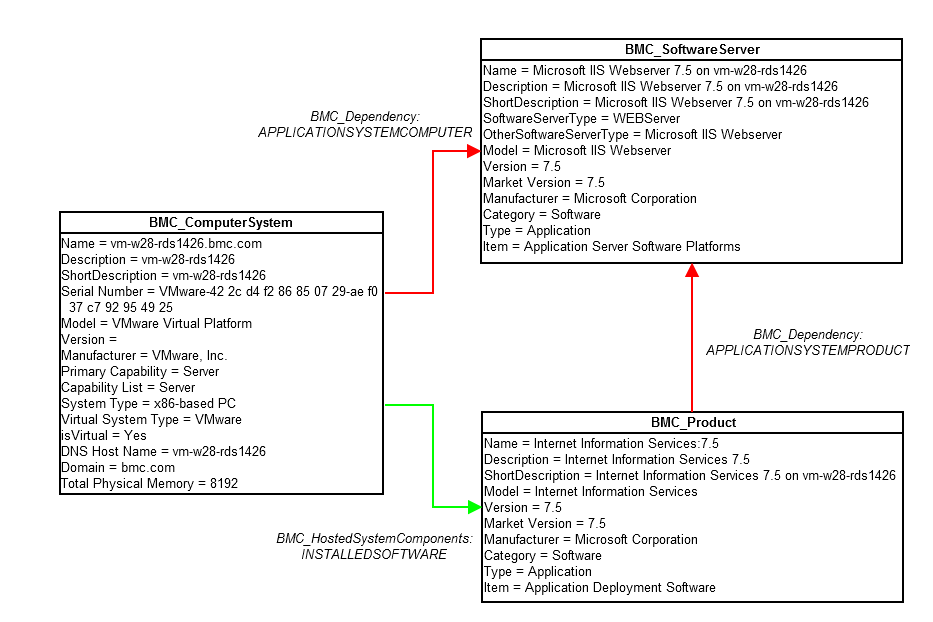 It is common for software servers to depend on each other and this is represented by a BMC_Dependency relationship with NAME=APPLICATIONSYSTEMDEPENDENCY. 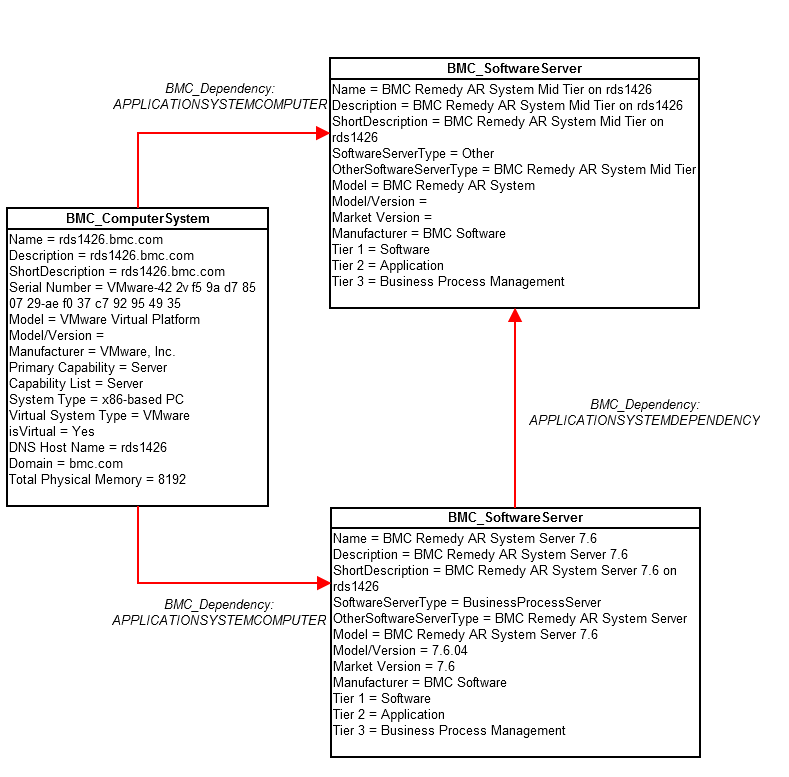 Two discovery providers can  discover the same product (such as Microsoft SQL Server 2008) on two different servers. Each discovery provider may provide different values for the BMC_Product Model, Manufacturer, and Version attribute fields due to differences in how they acquire this information. For example:

Having this type of inconsistent data in the CMDB could lead to incorrect licensing counts and other reporting issues.

The important BMC_Product CI attribute values that require consistent values across all CIs in the CMDB, and which need to be reconciled are:

Upgrading a piece of software to a newer version on a computer can be modeled by updating the version for the existing CI, which is done automatically by BMC Discovery.

Software that has been uninstalled from a computer is modeled by marking the appropriate CI as deleted (rather than hard deleting it). The CI for the uninstalled software that is marked as deleted so that information attached to that CI (incidents, licence information, and so on) is retained.

The BMC_SystemSoftware class and its subclasses store information about operating systems and other low-level software that manages computer resources.

Complex software is often hierarchical in nature. For example, a web application may be composed of a database, a web server, and an application server. Although the BMC_SoftwareServer class is used to model the lowest level components of such applications, other classes exist to model the higher level parts. These classes are:

If more than two levels (BMC_SoftwareServer and BMC_Application) are needed, further levels of an application's structure are modeled by the BMC_ApplicationSystem class.

The following diagram shows a multi-level application structure. Applications, such as Remedy Service Desk and Remedy Change are recognizable to users in business. Therefore, they belong to the BMC_Applications class. The applications are developed on top of the AR Server and the AR Server, in turn, relies on lower level components and is modeled as a BMC_ApplicationSystem. The lowest level components, modeled as BMC_SoftwareServers, are the BMC Remedy AR System Server and BMC Remedy AR System Mid Tier. 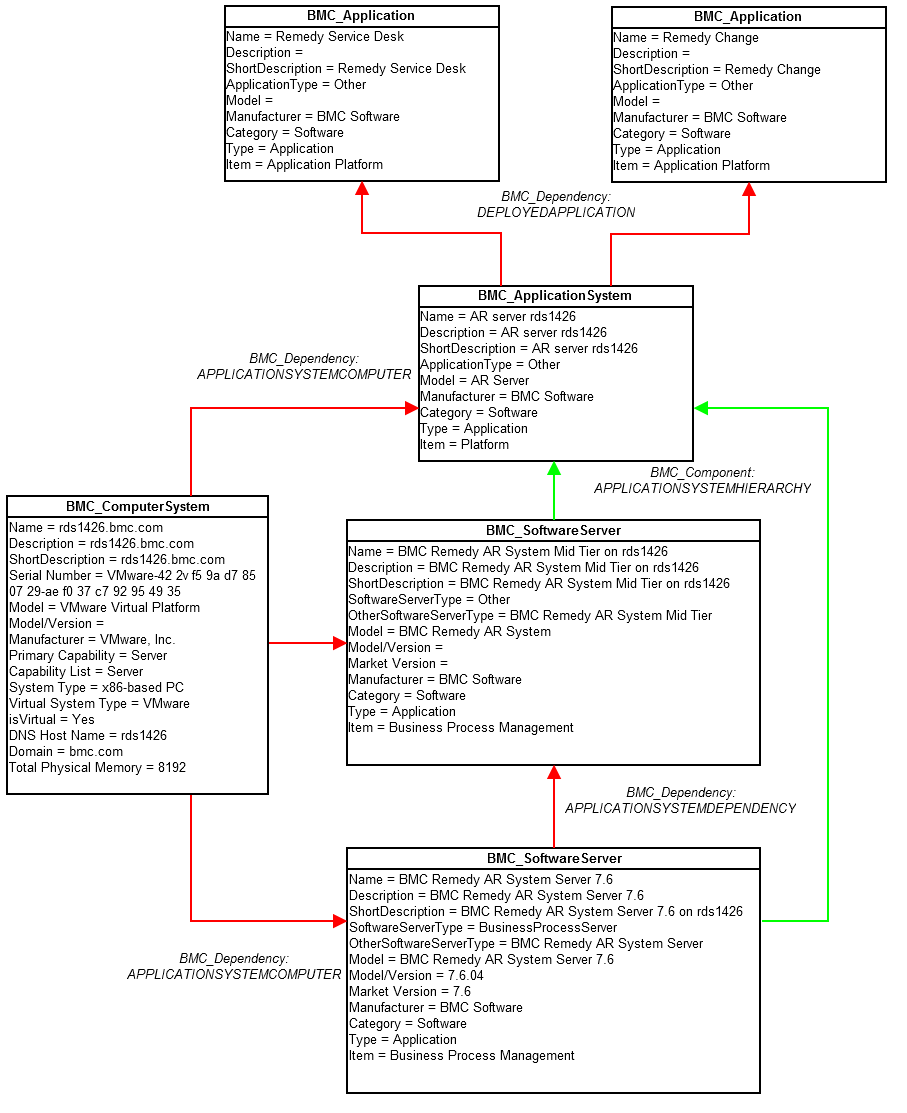 The application server itself is modeled as a BMC_SoftwareServer. 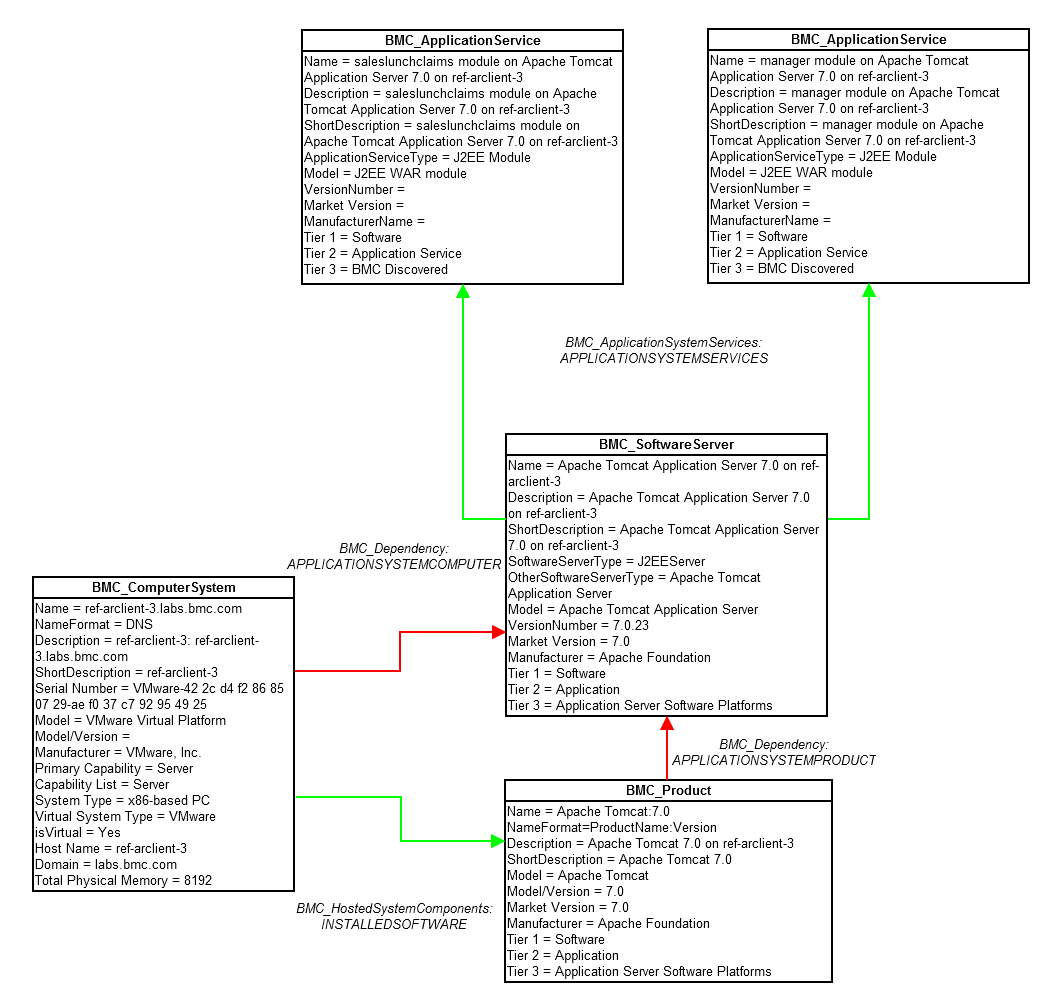 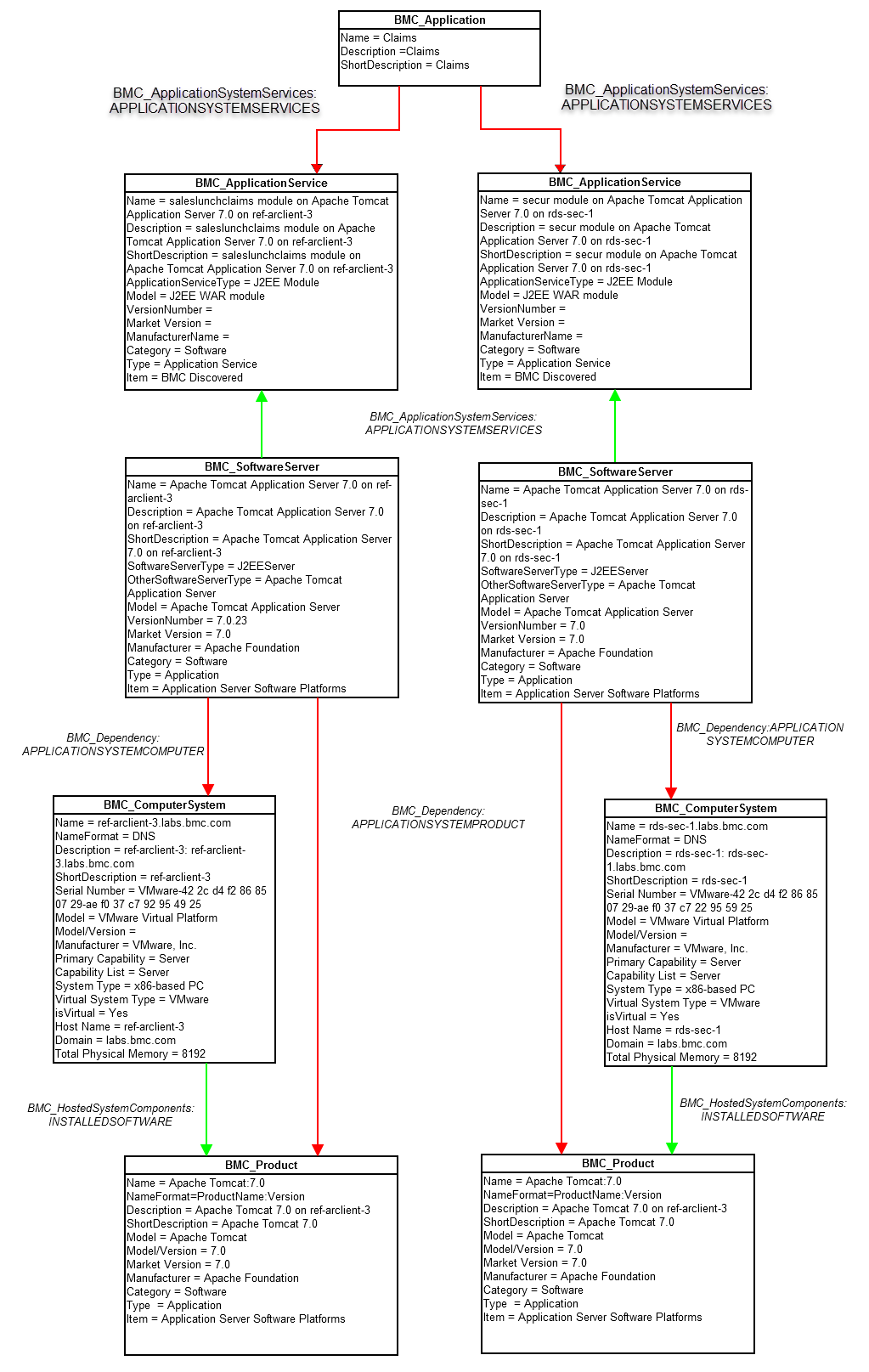 The BMC CMDB Product Catalog (PC) together with the CMDB Normalization Engine (NE) provides consistent and standardized values for these important attributes.

Applications have characteristics that help you determine the best way to use CDM in your modeling strategy. The following table maps the characteristics of an application to the type of class that you can use to model that application. All objects and relationships are not required to model certain types of applications. For example, patch information may not be required in the case of software license management.

The following figure shows how the installed, run-time, and service aspects of an application relate to each other.

The BMC_SoftwareServer class represents the deployed, run-time aspects of applications; in other words, the instances of software actually running on a server. You instantiate this class to capture long-lived, server-type applications in your environment. When modeling applications, you must remember this distinction. To model static, installed components such as Microsoft Excel or Microsoft Word, create a BMC_Product instance.

For complete descriptions of the classes described in this section for modeling applications, including examples of usage, see the BMC CMDB Data Model Help. For more information about using the BMC_Product class to model components, see Software inventory models.

For example, you can model a WebLogic application first by instantiating the BMC_Product class (to indicate where it is installed, the number of licenses, product name, and version). To add the run-time aspect, you can instantiate a BMC_SoftwareServer class. The following figure shows an example of this model, where two instances of a WebLogic application server (server1 and server2) are actually instances of the same installed product.

Accounting for the run-time aspect of the application in this context is very important for understanding the impact of an application on a business service. You must consider capturing WebLogic patches by using the BMC_Patch class, because the patch will then be connected to the service through the installed product, run-time, applications and, ultimately, the service and its relationships. Consequently, an IT administrator responsible for updating patches on WebLogic would understand how the change relates to the business that WebLogic supports.

This model can also be applied to an application or set of applications that support or collaborate to provide a particular business function. For example, an Oracle® application infrastructure supports two applications, TimeCard and HR personal data, both stored in the BMC_Application class. The two classes relate to each other through the BMC_Dependency relationship, meaning that both the TimeCard and HR personal data applications are dependent on the supporting Oracle application infrastructure. To decompose the system into its functional components, relate an instance of this class to its component BMC_SoftwareServer instance with the BMC_Dependency class.

The relationships for modeling applications are described in the following table. 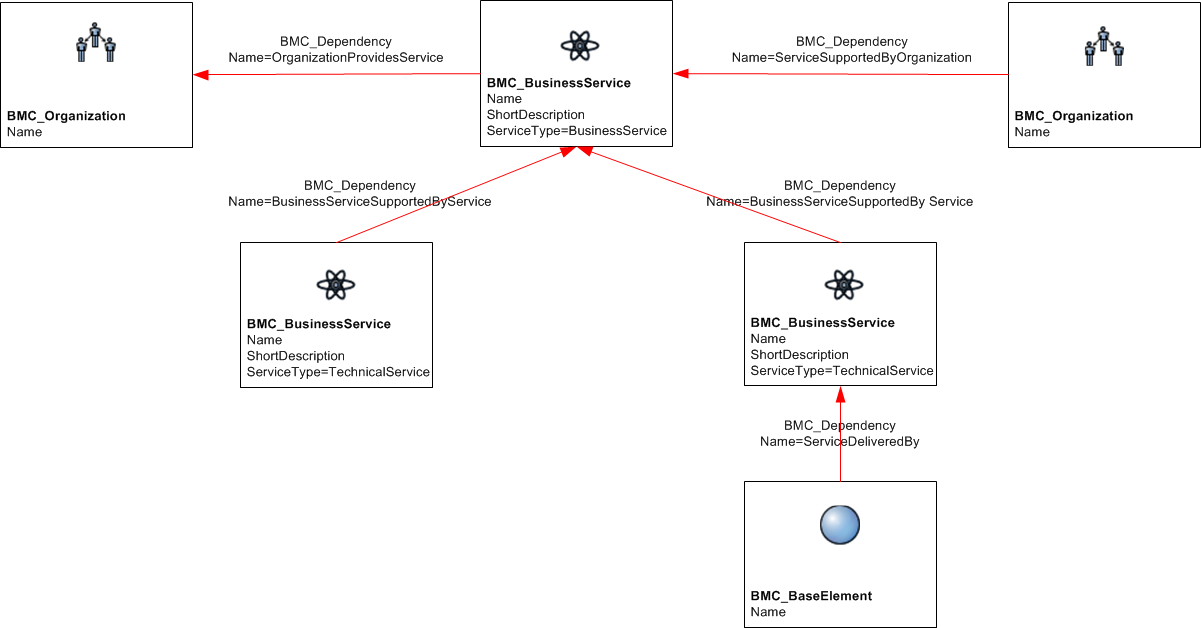 In this model, the BMC_BaseElement name is typically an application or database.

Was this page helpful? Yes No Submitting... Thank you
Last modified by Kanchana Iyer on Jan 05, 2020
task best_practices managing_common_data_model