Troubleshooting reconciliation based on error messages

If you are experiencing slow performance with reconciliation jobs, and if you see a high frequency of CI data related error messages, you must fix those issues first. The following are a few of such error messages and their solutions.

To troubleshoot CI data related error messages, you must be a CMDB administrator and you may also have to work with your database administrator.

To troubleshoot error messages related to identification of CIs

One of the major reasons of slow performance during identification of CIs is due to a large number of duplicate configuration items (CIs) identified.

The following is a sample error message of duplicate CI message found.

From the error message we can know that the class form is BMC.CORE:BMC_ApplicationService. The qualification used is <'Name' = $Name$> and value of the Name attribute is <Name = Apache HTTP Web server>.

The solution to this error involves identifying the duplicate CIs that use the attributes used in identification rules. For the example error message, you can perform the following steps to troubleshoot this issue:

ARERR[120092] The dataset ID and Reconciliation Identity combination is not unique.

The class mentioned in the above error message is BMC.CORE:BMC_ComputerSystem. There are out of the box and custom identification rules for each class. 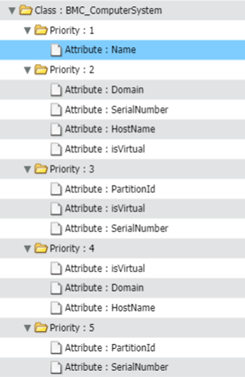 The priorities shown in the example show the sequence in which the rules check for CI duplication in the target dataset (BMC.ASSET). The priority proceeds to the next available rule until it reaches the final one.

Let’s assume that the following CI records are for BMC.CORE:BMC_ComputerSystem.

If we compare the above record table with the Identification rule for BMC_ComputerSystem class, the serial number is common for Dell and HCL laptops. Let us further assume that the fields for the Virtual and PartiionID attributes are NULL for Dell and HCL Laptop CI records. In this case, only the attribute Serial Number carries a value and this attribute shares the same number between these two CI records.

When the reconciliation job runs, the CI passes the first and second priority rule. After that, the job identifies the CI on the third rule based on the value of Serial Number considering that the isVirtual and PartiionID had NULL values. The job tries to assign the reconciliation ID OI-E7315F17CAC04E8AB89C2D5E8E924595 to the CI representing the HCL 200 Series Laptop in BMC.ADDM. This results in the error being logged.

Considering the above example, we must populate the correct values for the attributes such as isVirtual and PartitionID.

Reconciliation performance issues may also be due to merge related activities.

To troubleshoot the reconciliation activity related to merge activities

If your reconciliation job performance is slow due to a merge activity, you may want to verify and set the merge order to By class in separate transactions for faster processing using the following steps.

From the example error message, you can know that the Relationship Class record in BMC.CORE:BMC_HOSTEDACCESSPOINT could not be merged for the attribute MarkAsDeleted to No. The reason for the error is that you were attempting to set MarkAsDeleted to No for a relationship instance for which one or both endpoints are already soft deleted, that is, set to MarkAsDeleted.

If you try to set the attribute MarkAsDeleted to No for the previously mentioned relationship CI record, it will result in the following error message.

To resolve missing endpoints during the Merge activity

During a Merge activity, the same CI seems to be merged more than once. The error message displayed on the Job History Console includes Algorithm: Including child CIs and committing together. This error likely occurred because you selected Commit Together or Commit Separately for the Include Child CIs? option of the Merge activity but did not use a Qualification group to restrict the CIs to be merged. In this case, a child CI in a composite object is merged once on its own and once as part of the composite object.

To troubleshoot the reconciliation Purge activity

Performance issues rarely happen during the purge activity. If you see any issues, turn on the AR API SQL, and Filter logs and run the Log Analyzer tool to determine the expensive API SQL calls for appropriate actions.