Sandbox datasets and the promotion process
In this topic
Service context 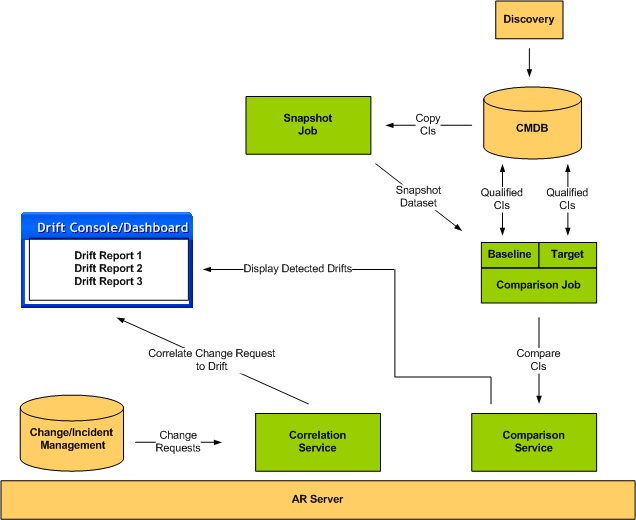 See the following video for an overview on BMC Configuration Drift Management. This video is recorded using the earlier version of BMC Atrium Core and is valid for BMC Atrium Core 9.1.

Simply stated, a drift is a change in your IT environment. Drift is the difference between the current physical state of your IT environment and the expected or correct state of your environment. At a more granular level, a drift is a change in a configuration item (CI), a CI attribute, or a relationship as defined in your BMC Atrium Configuration Management Database (CMDB). A drift is caused by adding, removing, or modifying CIs, CI attributes, or relationships between CIs.

BMC assumes you are familiar with basic configuration management and BMC CMDB concepts such as CIs and the BMC Asset dataset. For more information, see Related documentation.

BMC CMDB represents the correct or current states of your data center configuration items. Sometimes, however, real-world issues appear in the form of new releases, upgrades, new equipment, and unauthorized changes. After using your discovery mechanism to scan your environment and to update BMC CMDB, use Drift Management to monitor and detect changes in the state of your CIs. Drift Management is a consumer of, and works entirely from, the data in BMC CMDB. Drift Management is not a discovery tool, instead it relies upon a discovery application to update BMC CMDB.

Drift Management supports the verification and audit activities of configuration management as defined by the IT Infrastructure Library ® (ITIL ® ). According to ITIL, periodic audits of your IT environment should be conducted to verify that the BMC CMDB is up to date. The reverse is also true. Periodic audits of your physical environment should be conducted to verify that the physical environment has the correct and approved CIs as defined in BMC CMDB. For example, suppose you want to verify that all security servers have the same CIs and configuration attributes. With Drift Management, you can establish a baseline using a known security server that is in your BMC CMDB and that has the appropriate configuration. You can then compare all other security servers (target servers) with the baseline to detect whether any changes (drift) have occurred. The drift might be due to the addition, removal, or modification of CIs or attributes on your target servers. With Drift Management, you can perform the audit and verification process as needed or on a regular audit schedule. For example, you might want to audit the servers most critical to your business on a daily or weekly basis and the less critical servers on a monthly basis. If drift is detected, Drift Management enables you to take corrective action (after proper research for the root cause) either by using a change request or by correcting the target computer using an incident request.

ITIL recommends that you perform a configuration audit in your IT environment at the following times:

Data from a discovery application is reconciled by the BMC CMDB reconciliation engine and placed in the BMC Asset dataset. This discovered data is then used by Drift Management. 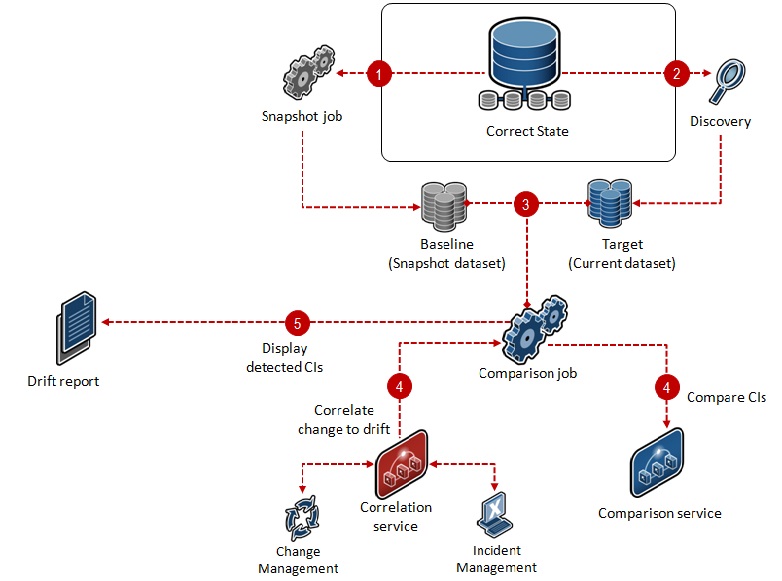 The workflow is as follows:

Was this page helpful? Yes No Submitting... Thank you
Last modified by Chaitanya vikas Ghanta on Jun 16, 2020
best_practices getting_started