Impact simulation
In this topic
Sandbox datasets and the promotion process

A dataset can contain only one instance of a given CI. An instance of that CI might also exist in other datasets to represent the CI in the contexts of those datasets. Instances representing the same CI or relationship across datasets share the same reconciliation identity, or reconciliation ID.

Each CI and relationship in BMC CMDB must reside in a dataset, meaning that they have a DatasetId attribute that must contain a value.

Calbro Services needs to discover various hardware and software, bring relevant information from the payroll services, compare this data and put preferred pieces of information in the production dataset.

Calbro Services uses the BMC BladeLogic Client Automation product to discover the desktop and laptop computer systems, (including hardware and software) used by Calbro Services employees. This information is stored in the BMC Configuration Import dataset of BMC CMDB.

Because some of the instances in these different datasets might represent the same real-world CIs, the administrator configures BMC CMDB reconciliation jobs to compare those datasets against each other and put the preferred pieces of information in the production BMC Asset dataset.

BMC CMDB offers overlay datasets, which enable you to:

Overlay dataset functionality applies only to BMC CMDB API clients. If you use the BMC Atrium Core Console or the class forms to view or modify instances in an overlay dataset, you receive unpredictable results and can compromise data integrity.

Requests made to the underlying dataset always return instances from that dataset, never from an overlay dataset.

Query to an overlay dataset 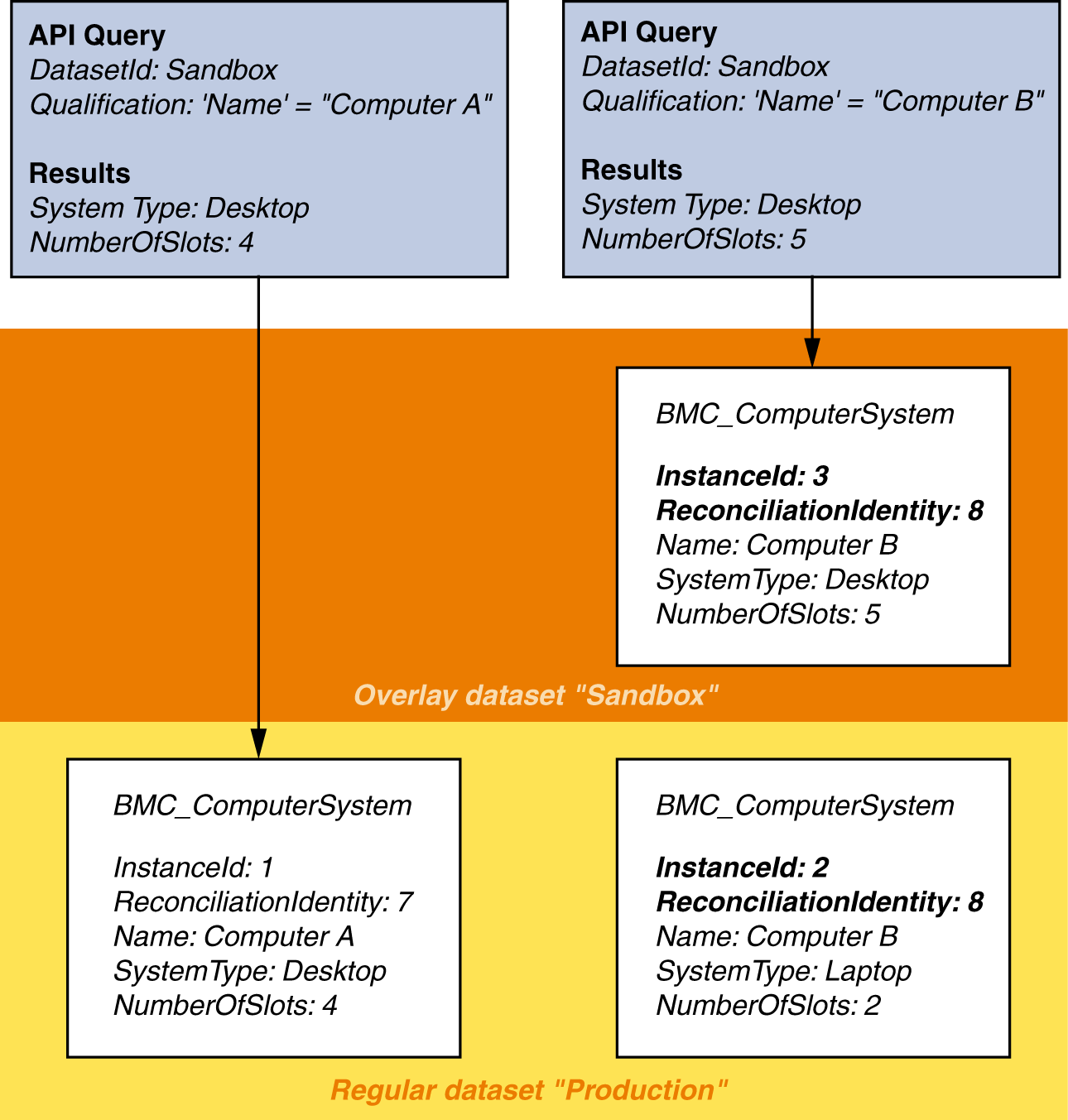 Result of deleting instances from an overlay dataset

When an instance is first created in an overlay dataset as the result of a modification, it retains the reconciliation identity of the instance in the underlying dataset, but is assigned a new instance ID.

If the underlying instance has not yet been identified when it is modified in the overlay dataset, the instance has no reconciliation identity in either dataset. This is not a problem. When you eventually identify and merge the two datasets, your Identify rules should be able to match these instances so that they receive the same identity.

If you decide to keep the changes that you modeled in an overlay dataset, you can merge them into the underlying regular dataset.

Sandbox datasets and the promotion process

Was this page helpful? Yes No Submitting... Thank you
Last modified by Chaitanya vikas Ghanta on Oct 12, 2020