What is TrueSight Middleware and Transaction Monitor (TMTM) actually monitoring? Well, monitoring can mean several things and can differ on the type of item being monitored and the technology involved; it can include statistics, the state of whether something is active, running, pending, etc. So let us start out on some common ground: for this product, “objects”, and more specifically, WebSphere MQ objects, are the items being monitored.

How does TrueSight Middleware and Transaction Monitor work?

Working with the Object Repository

How are objects identified?

Objects are identified in a hierarchical manner, such as in the following example: 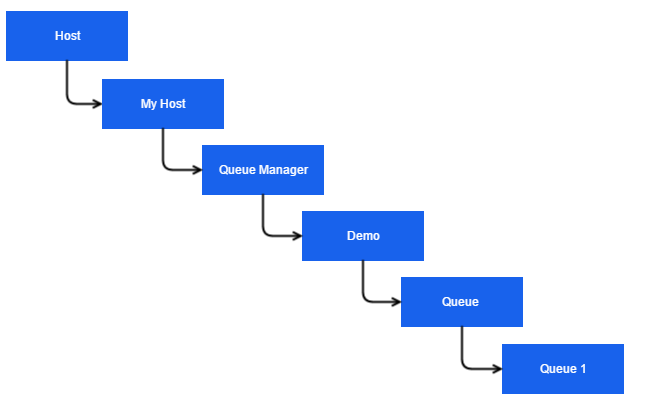 The type of an object and its name are often separated into “type” paths and “instance” path. When working with command line tools, a ! character is used as a delimiter.

Sometimes an Object Identifier (OID) consisting of three numbers separated by an _ is also used. Many of the TMTM command line tools use the OID as a short hand way to identify an object.

An object usually has attributes on which monitoring extensions publish values. These values can be statistical, identifiers, informational, etc. and can be viewed in Views and dashboards.

Where are objects maintained?

Objects are maintained in the database and this is known as the Object Repository.

Some extensions, such as the WebSphere MQ extension, support object discovery. MQ objects include queues, topics, channels, etc. and the queue managers they reside on. Object discovery is enabled by default on distributed systems and disabled by default for z/OS. When object discovery is enabled, during each monitoring cycle the extension is able to determine which objects have been added or removed. When an object is discovered it is said to be confirmed. Each object also maintains the time when it was first discovered, when it was last confirmed to exist, and when the state last changed (each object has a state (one of ADDED, CONFIRMED, NOT-FOUND, DEPRECATED, or DELETED).

As newly added or removed objects are discovered their state is changed in the object repository maintained by the services. This enables you to use polices to perform actions in a uniform and consistent manner when objects are newly created and/or removed. Examples of actions include the following:

You can also manually perform the actions done by a policy. Refer to How does TrueSight Middleware and Transaction Monitor work? for details on how to perform those actions using either the Monitor Console or a command line utility.

How does TrueSight Middleware and Transaction Monitor work?
Overview of policies