Rebooting servers in a predefined order

This topic was edited by a BMC Contributor and has not been approved.  More information.

The information on this page was initially contributed by Steffen Nowka.

This document is meant to show how to use BMC Bladelogic Server Automation (BSA) to reboot a set of servers in a predefined order and to handle individual stop/starts of services on each server. Each step of the process is supposed to handle the services stop/start and reboot of a defined subset of the overall group of targets and then move on to next subset, e.g. first to reboot the webservers and then database servers. Each subset might contain 1..n targets.

All servers to reboot:
srv1
srv2 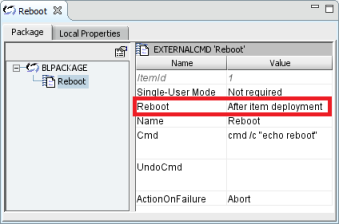 The stop/start of services is handled by regular BLPackages set to stop or start of the needed services.

Those jobs are then grouped in a batch job which is defined to use the target servers of the individual jobs it contains. 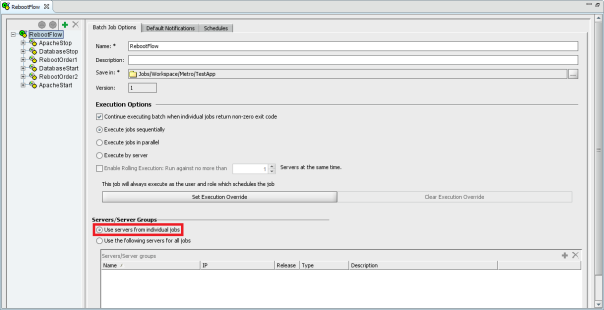 As the previous way requires single reboot jobs for each server smart group but runs without the use of any sort of script the number of reboot jobs might get high. An alternative to it would be the use of an NSH script that simply checks weather or not the boot order of a target server equals to current step in the process. For this an updated version of the "Reboot server in a controlled manner" NSH-script can be used (double-click to select):

The NSH script can then be used by a job containing the current boot order to boot and will only boot the servers with the correct order:

The NSH scripts are then grouped in a batch job which is configured to use its own target list instead of the individual job ones. It will then run against all of the target servers and each boot order will check if a target server has the same order number and reboot or ignore that target for that step.