Navigating the interface
In this topic
Defining and managing packages, repositories, and notifications
BMC Release Package and Deployment 5.0 Using

Example of a web application deployment

This topic describes a simple example to help you get started using the software quickly. The example defines the deployment for a basic web application to explain what you need in your environment to support the software, and provides the basic steps for a quick start.

The following video (6:12) shows an overview and demo of using BMC Release Package and Deployment.

You have a web application to be deployed, consisting of a WAR file and an SQL file: 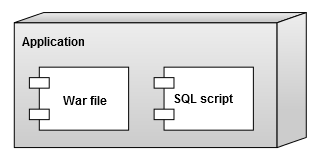 The current environment consists of the following elements:

The following diagram illustrates this environment: 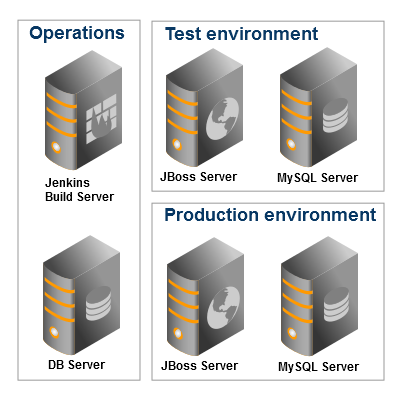 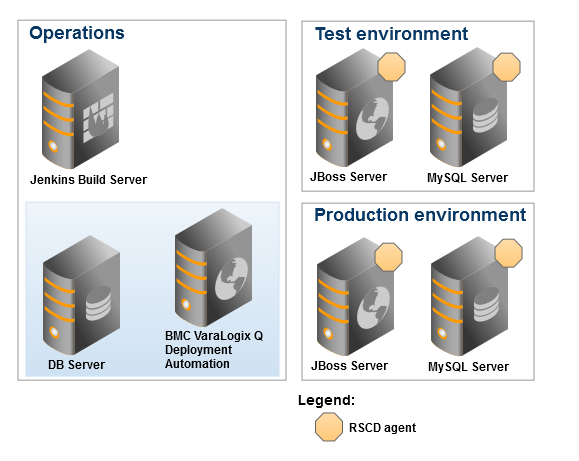 After installation, you configure the system for deploying the web application. A complete deployment consists of the following parts:

When you have defined all of these parts, you are ready to create a specific version of your package (an instance) and deploy it.

To define the application package (what you will deploy)

By creating your instance now, you can ensure that the system has imported all data into the package and confirm that you have all the right parts for a deployable entity.

To define the topology (where you will deploy)

The topology defines the targets for the deployment and any dependencies. It represents the business infrastructure.

You now have your topology in place, modeling your physical infrastructure around your business model.

To define the deployment process (how to deploy the application)

Create the deployment processes that actually does the work, using the action library to define the processes. You can create different types of processes by defining the activities and triggers associated with them.

Activities are basic building blocks with parameters that enable them to be reused in different environments. They represent single execution steps or commands within the deployment, such as sending a file or suspending deployment.

When you are satisfied that everything works as planned, you can create a schedule to run the deployment step on a regular basis. For more information, see Creating and using deploy schedules.

Navigating the interface
Defining and managing packages, repositories, and notifications