The following examples assist you in defining a rule grammar:

An IOS banner usually looks something like this in the running configuration:

The first line in a typical banner begins with a configuration command (banner motd or aaa authentication banner, followed by a control-C to delimit the start. The lines that follow contain the text to be displayed in the login banner. The last line in the banner contains another control-C delimiter.

The recommended technique is to select a domain of Selected Blocks, as described below. This rule covers correcting an incorrect banner, as well as adding a banner to a configuration that does not have a banner.

To create this Cisco IOS banner rule, the following changes were made from the Grammar tab in the Edit Rule page. 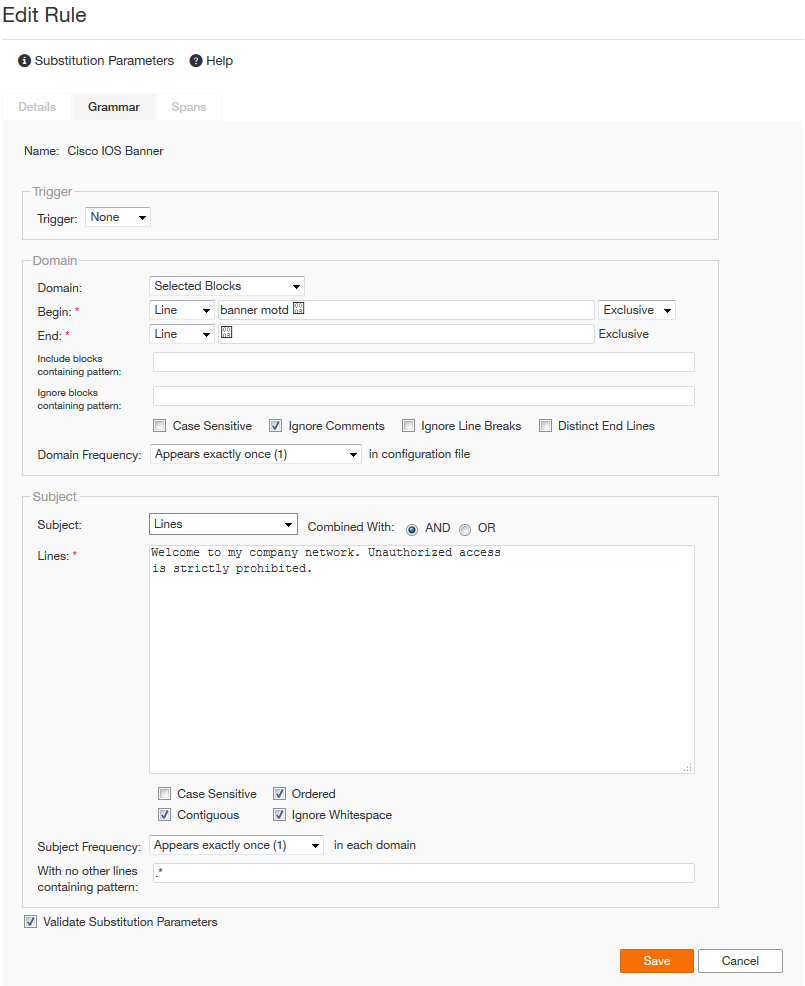 The following example presents the grammar necessary to create a rule that will ensure that all shutdown interfaces have no IP address for Cisco IOS devices.

Here is how such an interface block might look in the running configuration:

To create a rule that would remove the unwanted IP address lines from Cisco IOS configurations, the following changes were made from the Grammar tab in the Edit Rule page. 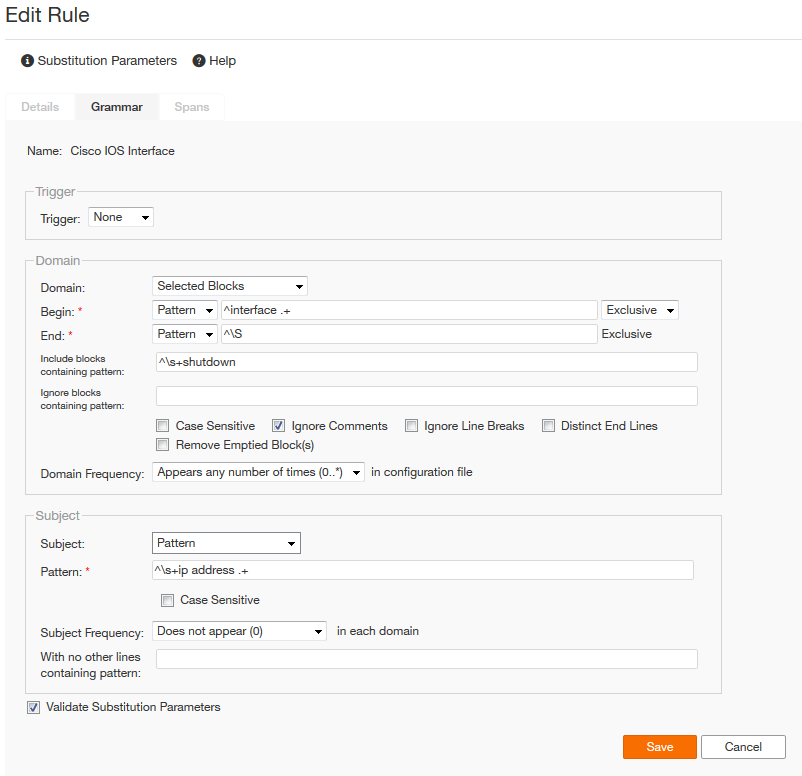 The following example presents the grammar necessary to create a rule that will ensure that all SNMP communities include at least one client system for Juniper JunOS devices.

To create a rule that would enforce each community having at least one client address in Juniper JunOS configurations, the following changes were made from the Grammar tab in the Edit Rule page. 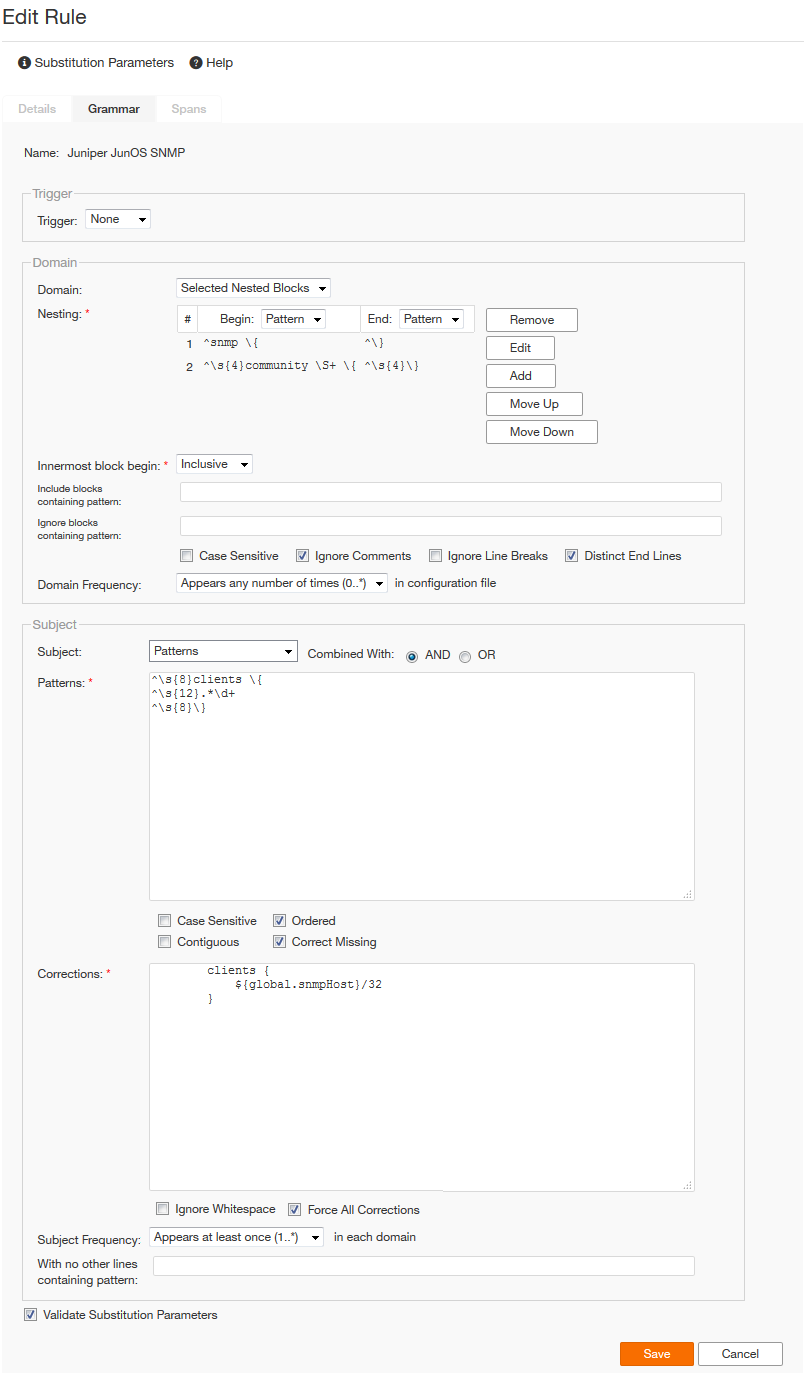 When a vendor reports that a piece of equipment is scheduled to reach the end of its support life (end of life, or EOL), this indicates that you need to replace that equipment within a reasonable time. BMC Network Automation can help remind you to do this by flagging such devices as being in violation of an end-of-life rule. You can create the rule in advance of the end-of-life date and have the system start flagging violations once the end-of-life date is reached. The following example shows how to define such a rule.

Note that the exact format or wording of the model a vendor reports for EOL and what BMC Network Automation discovers as the model from a device might not be exactly the same. You must use the string the system discovers and stores in the BNA Device Attributes configuration.

While creating the rule, add the details as shown on the Details tab. 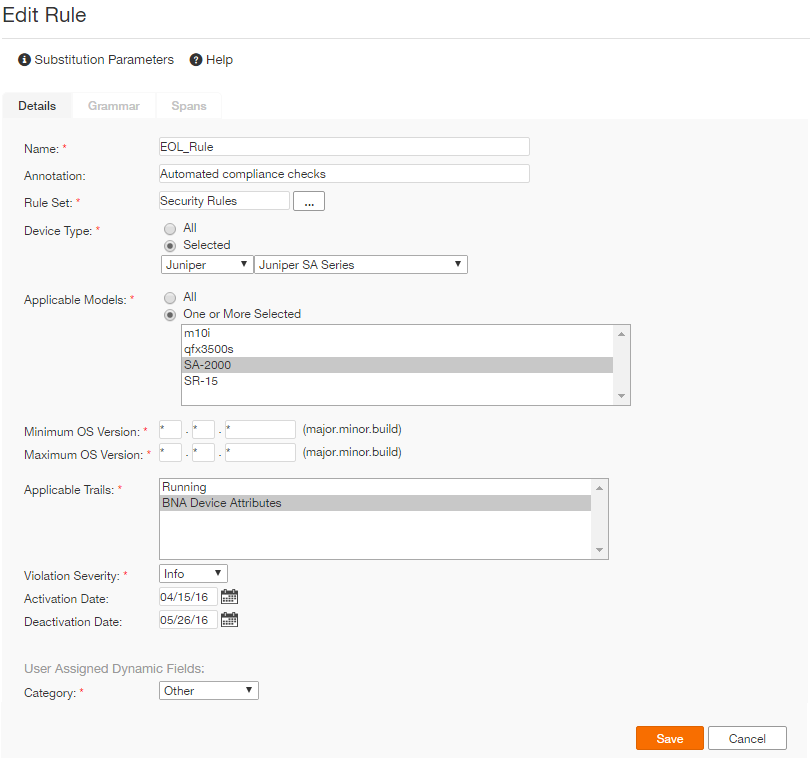 Add the rule grammar as shown on the Grammar tab. 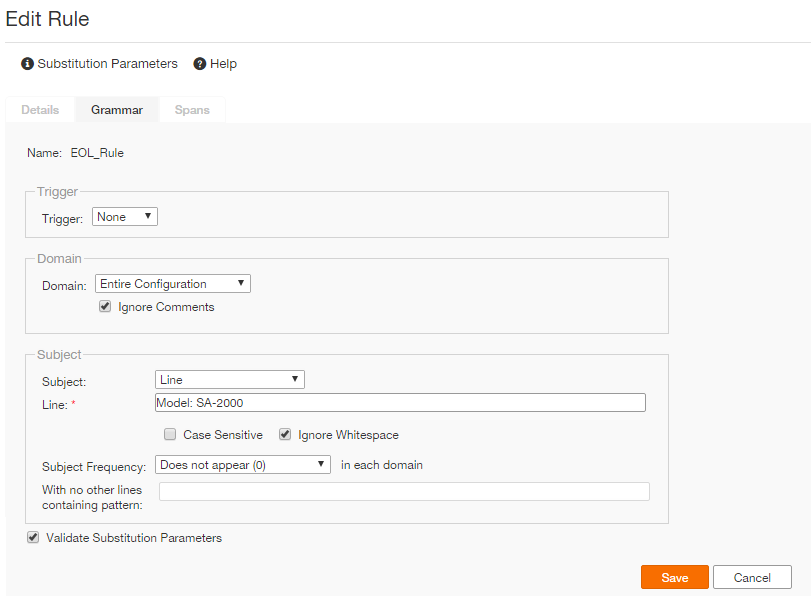 If you have many models scheduled for EOL, you might define the rules in one of the following ways:

Note that not all device types are capable of discovering the device's model. If you need an EOL rule for such a device, you must find another way to put the device into violation. One option is to add a dynamic field where you enter the model number manually when necessary and leave it blank otherwise. Dynamic field values are also included in the BNA Device Attributes configuration, and so you can develop rules against those values in the same way as shown for the model value above.