At Calbro Systems, a customer-facing documentation website was running on an Apache Tomcat instance connected to a Postgresql database. Customers began calling the Calbro Systems NOC service desk complaining that the documentation site's performance was poor, and that it was sometimes completely inaccessible.

At the initial meeting with management, several diagrams and calculations were sketched out on paper.

Before process automation and orchestration

The meeting with management resulted in a sketch of the current process.

Before process automation and orchestration 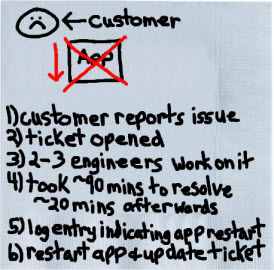 After process automation and orchestration

An automated and orchestrated process was sketched on paper:

After process automation and orchestration 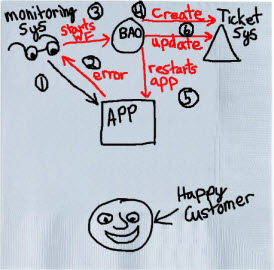 An analysis of the problem is detailed in the table below.

The next meetings, with the technical team, identified the current business process and costs to resolve the issue.

The total time to resolve the issue was 45 minutes, and involved 15 IT members.

Subsequent incidents led the team to verify the symptoms and restart the application, which lessened the time to resolution to 15 minutes.

Over the span of six months, this issue recurred an average of 11.54 times every month. Each incident averaged 15.35 minutes of downtime, totaling 177 minutes of monthly downtime. The cost per incident was $5,312.50, totaling $61,306.25 in lost productivity every month.

How BMC Atrium Orchestrator can help 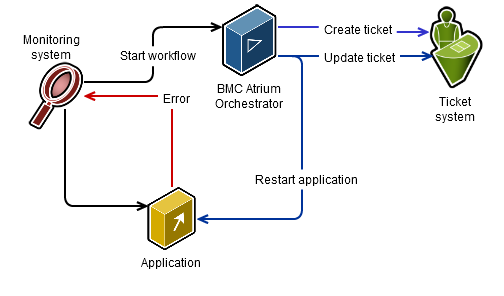 Using BMC Atrium Orchestrator, the team developed a workflow that checks for the problem condition, restarts the Tomcat instance, and continuously updates the incident ticket.